Gold eases as dollar, stocks bounce ahead of NFP

The first non-farm payrolls report of the year will be released later at 13:30 GMT. It is probably not going to be the most important one for the year. That is because Donald Trump’s promise of creating more jobs will take time to come to fruition, if it does at all. Nonetheless, the available leading employment indicators suggest we could see a big print anyway. But it also means that the scope for disappointment is now quite high. So, expect to see a potentially sharp move in the dollar and by extension gold when the data is released.

The first non-farm payrolls report of the year will be released later at 13:30 GMT. It is probably not going to be the most important one for the year. That is because Donald Trump’s promise of creating more jobs will take time to come to fruition, if it does at all. Nonetheless, the available leading employment indicators suggest we could see a big print anyway. But it also means that the scope for disappointment is now quite high. So, expect to see a potentially sharp move in the dollar and by extension gold when the data is released. Read my colleague James Chen’s full NFP preview HERE.

Could the dollar fall despite a strong number?

Though among other things both the ADP private sector payrolls report and the employment component of the ISM manufacturing PMI were strong, we haven’t had the employment index of the key services sector PMI yet. Also, it could be that because of the available indicators that the market has already priced in a better than expected number. After all, the dollar has already bounced back nicely against certain currencies on Thursday and we have seen some follow-through in buying momentum this morning. Thus, when the data is released, we could see the dollar react negatively after an initial spike higher, even if is (slightly) better than expectations. Apart from the headline jobs number, there is the small matter of wage growth. This will also need to be strong if the dollar is going to make a more meaningful comeback.

Gold could come back strongly IF jobs data disappoints

Apart from the obvious dollar pairs, gold could be in for a sharp move today when the data is released. So far, it has struggled to hold above the broken resistance level of $1220, which suggests that the buyers are unwilling to commit at these higher levels. In a way, you can understand why. Both the equity markets and the dollar have stabilised a little since mid-week, which reduces the appeal of the perceived safe-haven and dollar-denominated commodity. However, with big US tech earnings disappointing expectations and the release of the monthly jobs report imminent, stocks and the dollar could fall back later on in the day. Should that happen then it is reasonable to expect a bounce in gold and silver. Conversely, a very strong NFP number could see gold tumble back below $1200 and head towards the bottom of the current range at $1185, before deciding on its next move. 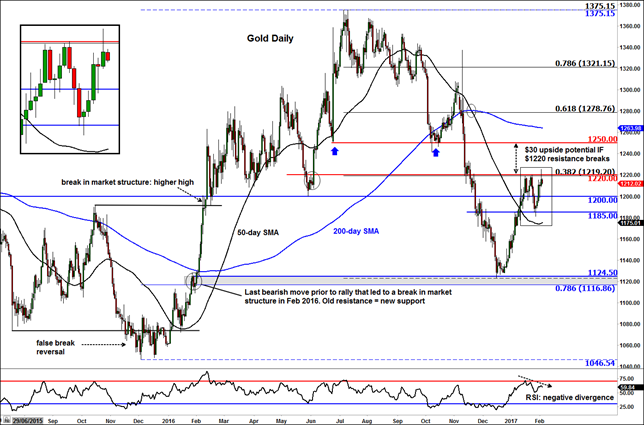