The key question now is what will happen in the equity markets and the US dollar. If stocks and the dollar both manage to show relative strength again, then this should pressurise the buck-denominated and perceived safe-haven gold. Conversely, gold will remain in demand should risk sentiment stays cagey. There are no obvious triggers that could change sentiment one way or the other today. But given that there hasn’t been any significant follow-through in selling of riskier assets, gold may stall here and head lower again.

Echoing this uncertainty, the price of gold is currently stuck between key support and resistance levels. Specifically, support is being provided by the 50- and 200-day moving averages at around the $1245-8 area, while resistance is being offered by old support and 61.8% Fibonacci retracement level at $1265.

If support at around $1245 breaks decisively then the next bearish objective would be $1237, which was previously resistance. Thereafter, the bullish trend line would come into focus.

Meanwhile if resistance at around $1265 area breaks then $1270 would be the immediate bullish objective ahead of the long-term bearish trend line around $1275/8 area.

As we are not too sure of the trend, we prefer at this stage to take things from one level to the next and reassess. Confirming the mixed technical signals, the 50-day moving average has moved above the 200-day average in a development known as a golden crossover, but this has happened ahead of resistance and the long-term bearish trend line. I guess the trend will become clearer in due course. So gold should be one key market to watch for any subtle changes in direction. 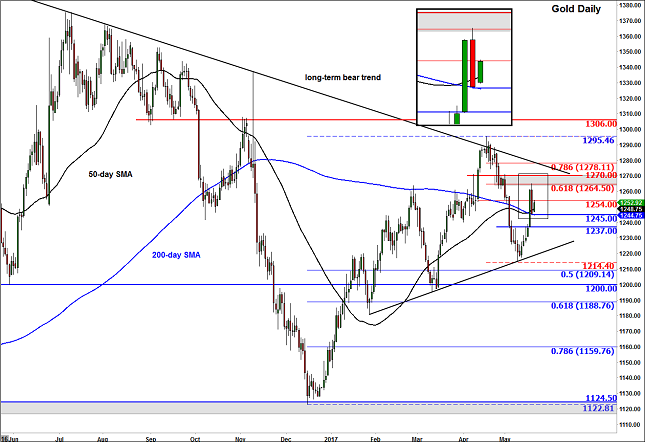