After rallying sharply on the back of a hawkish Federal Reserve yesterday, the dollar pulled back during the European session as some traders banked profit. Market participants wondered whether or not the FOMC meeting yesterday was a game changer as after all the Fed had already communicated its intent to start its balance sheet normalisation process this year.

After rallying sharply on the back of a hawkish Federal Reserve yesterday, the dollar pulled back during the European session as some traders banked profit. Market participants wondered whether or not the FOMC meeting yesterday was a game changer as after all the Fed had already communicated its intent to start its balance sheet normalisation process this year. Thus, the news should have been at least partially priced in. What’s more, although the probability of another rate hike in December has risen, the FOMC’s updated dot plot projections showed that the median forecasts for interest rates were little changed from the last one issued in June. And while the Fed increased its 2017 GDP forecast slightly, it lowered its inflation projections. Still, with the Fed keen to tighten monetary conditions further, this should fundamentally support the dollar going forward. But this does not necessarily mean the greenback will rise against all currencies. A couple of other major central banks including the Bank of England and Bank of Canada have already dropped their dovish biases. Thus, even if the Dollar Index goes on to embark on a major rally from here, the dollar’s potential gains could be limited against both the British pound and Canadian dollar. Conversely, currencies where the central bank is still dovish are likely to underperform – such as the Japanese yen and Swiss franc. Perhaps the biggest loser in the dollar’s slipstream could be gold. The yellow metal of course does not pay any interest nor dividend, and costs money to store. What’s more, gold is priced in the dollar, so when the latter goes up in value, this tends to weigh on the former. The only hope for gold is if we see an unexpected fall in the dollar or a sharp rise in risk aversion, which would boost the appeal of the perceived safe haven commodity. Otherwise gold could fall back sharply given that it has also suffered a major technical damage in not being to hold its own above the key $1300 handle for too long. A potential break below the $1276 level – the last low prior to the rally that took out the $1300 resistance level – would more or less confirm a trend reversal in gold. 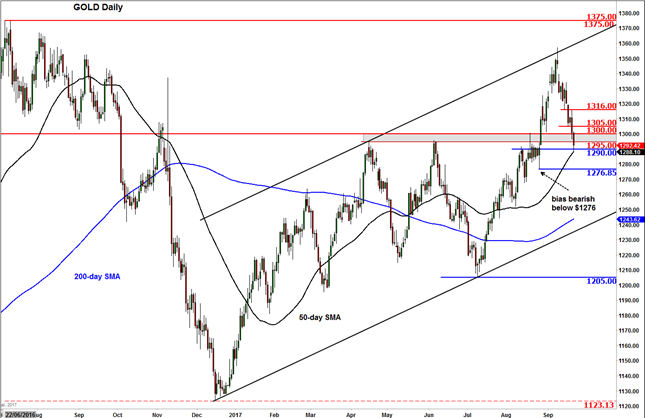