It is becoming a recurring theme: North Korea launches or threatens to launch a missile, gold rises, stocks tumble, then things calm down and stocks more than make up their losses. But is it different this time?

It is becoming a recurring theme: North Korea launches or threatens to launch a missile, gold rises, stocks tumble, then things calm down and stocks more than make up their losses. But is it different this time? After North Korea said it had tested a hydrogen bomb at the weekend, South Korea’s central news agency has reported that Pyongyang is preparing for the launch of a ballistic missile. In a clear sign of risk aversion, stock index futures opened with large gaps overnight, although European indices have bounced off their lows. It is a quiet day otherwise with the economic calendar largely void of any major data as North America observes Labor Day holiday. Thus, any volatility we may get today would be due to geopolitical issues rather than economic data. Things should however pick up as the week progresses as we will have plenty of data and interest rate decisions from the Reserve Bank of Australia, Bank of Canada and European Central Bank to look forward to.

For now though the focus remains firmly on North Korea and whether they will launch another ballistic missile, and how this may impact the markets. It is interesting to note that so far stocks have been quick to regain their poise on easing of geopolitical concerns, while gold has had a tendency to remain overall supported. Admittedly, precious metals and stock indices are two different animals with the former being supported additionally by a weaker dollar so far this year. However, even when you take the dollar out of the equation, the behaviour of the stock markets and gold does appear a bit bizarre. With US indices hitting repeated new highs, one would expect gold to be hovering near multi-year lows. But this is obviously not the case with dollar denominated repeatedly hitting new highs for the year, while gold in euro terms at €1120 also remains supported comfortably above the 2016 low (of around €988).

So, are gold market participants being unreasonably negative, or are stock market participants being unreasonably optimistic? I think a bit of both. But if you think about gold's traditional role as a safe haven commodity, it makes sense for it to go up and stay up while geopolitical tensions are high. Undoubtedly many sound money managers would allocate some portion of their funds in buying protection for their long stock holdings in case of a market correction. The protection can be a combination of options or safe haven plays like gold and silver. Buying the stock market dip has been a very successful trading strategy over the past several years, and evidently many people still prefer that strategy over selling the rips. These investors must still feel that the overall risk of geopolitical tensions are not big enough to outweigh the benefits of the variables (e.g. low interest rates) that keep stocks underpinned, even at these lofty levels. This explains in part why both stocks and gold remain largely supported rather than go in the opposite direction despite raised geopolitical tensions. Thus, unless the unthinkable happens and North Korea and the US start an actual war, I wouldn't be surprised if stocks were to come back again.

As far as gold is concerned, the precious metal continues to break key resistance levels. After taking out and holding above the $1290-$1300 key resistance area, gold has now hit $1337/8, the November 2016 high. At almost $1340, the metal achieved its best level overnight since September 2016, before pulling back a little. As before, our next immediate bullish objectives remain at $1352, the 161.8% Fibonacci extension level, and then at $1375, the 2016 high. But how it may get to these levels we are not so sure. Will it first dip to test support then continue higher, or was the weekend void a “power gap,” in which case it will continue pushing higher without a pullback? But because of its sharp gains, gold is looking a little bit ‘overbought’ in the short-term with the momentum indicator RSI moving north of 70 again. So there may be a possibility for a short-term pullback because of profit-taking. The immediate support would be the gap fill base and old resistance around $1325, followed by that $1290/$1300 range. However should gold eventually break below the $1276 swing low point then this would end the bullish bias. Unless that happens, we are expecting to eventually see higher prices in the coming days and weeks, especially given the break of the long-term bear trend (which can be observed on a weekly or monthly chart). 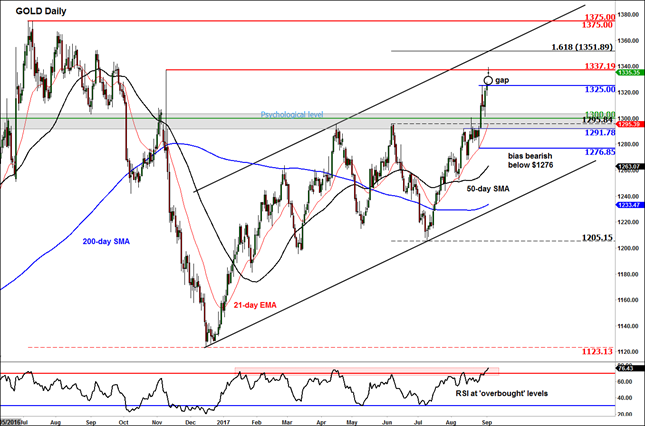