Despite the sizeable sell off in technology stocks, and the recent weakness in the dollar, gold has been heading south ever since early June. And so when the dollar rebounded yesterday, while government bond yields rose and the Dow hit a new record high, the buck-denominated, noninterest-bearing and perceived safe-haven precious metal took a bigger drop.

Despite the sizeable sell off in technology stocks, and the recent weakness in the dollar, gold has been heading south ever since early June. And so when the dollar rebounded yesterday, while government bond yields rose and the Dow hit a new record high, the buck-denominated, noninterest-bearing and perceived safe-haven precious metal took a bigger drop. The 1.7% fall was the metal’s biggest percentage daily decline since November. Due to these unfavourable fundamental developments, sentiment towards gold is currently and understandably bearish. Indeed, speculative market participants have already been withdrawing from gold and other precious metals for three consecutive weeks now, as highlighted by positioning data from the CFTC. This is likely to have continued for the fourth week given yesterday’s big drop, which also triggered sizeable gold-backed ETF outflows – the SPDR Gold Shares having experienced an outflow to the tune of 6.21 tonnes.

Gold’s inability to hold above its downward-sloping 200-day moving average and the subsequent breakdown below this technically important tool probably helped to exacerbate the price slide yesterday. While below this and the 50-day moving average, the trend is objectively bearish. For that reason, gold is probably not on bullish trend followers’ watch list any longer. If anything, it is certainly catching the eye of the bearish speculators. As more support levels break down, the selling pressure is only likely to increase. The next level to watch is the May low at $1214/15 area. If the metal breaks and holds below this level, we will have our first distinct lower low for the year. This would end the bulls’ hopes once and for all.  However, the bulls will be quick to return on any potential weakness in the selling pressure, especially around the key support levels that are now approaching, including that $1214/5 level and then the psychologically-important $1200 handle. Even so, any potential rebounds could be short-lived given the technical damage gold has already incurred. The long-term trend would only turn bullish once we create new high above $1295. Until and unless that happens, any potential rebounds should be taken with a pinch of salt. 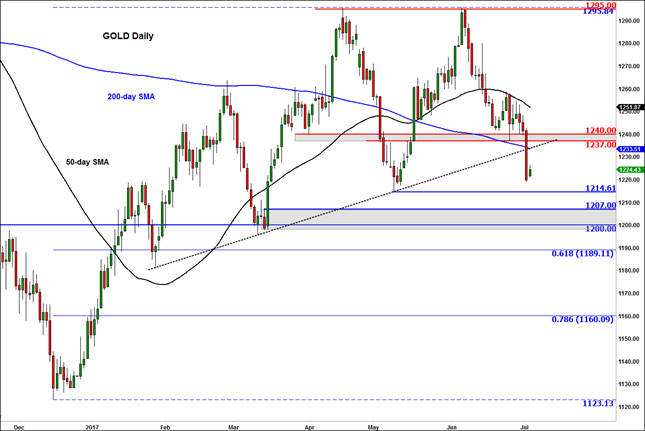