Gold loses shine ahead of Fed

<p>As the US dollar strengthened and global stock markets continued to stay supported on Monday, the price of gold resumed its sharp retreat from last week’s one-year high around the $1280 resistance level.</p>

As the US dollar strengthened and global stock markets continued to stay supported on Monday, the price of gold resumed its sharp retreat from last week’s one-year high around the $1280 resistance level.

Since mid-December, when gold rebounded with a clear double-bottom pattern off a new multi-year low around $1050, the precious metal has been rising swiftly in price for nearly the past three months. The latest culmination of this climb occurred within the past two weeks after price broke out above a key triangle pattern near its highs. Shortly after, a double-top high around the $1280 resistance level was formed, which provided an indication of potential market resistance to further appreciation.

After reaching up to hit that high late last week, gold has pulled back sharply to end up below its noted triangle breakout level. This retreat has occurred partly as a result of the recent rally in stocks, which reduced "safe-haven" flows towards gold, but more importantly due to a relatively well-supported dollar. As gold is denominated in US dollars, a strong inverse correlation generally exists between the two.

A major economic news event this week has the strong potential to affect both the dollar and equity markets in a significant way, and therefore the price of gold as well. Among several other central bank monetary policy statements this week, Wednesday’s US Federal Reserve statement and press conference should provide more clarity as to the Fed’s outlook on future interest rate hikes, especially in light of last week’s aggressive easing measures announced by the European Central Bank (ECB). If the Fed maintains a relatively hawkish outlook despite the ECB’s actions, the US dollar could continue to be supported and gold could slip further. In the event that the Fed has become pressured to take on a more dovish stance, however, the US dollar could break down, prompting a potential rebound for gold.

From a technical perspective, the price of gold has formed somewhat of a bearish divergence against technical momentum indicators near its noted $1280 double-top highs. In the event of a further pullback that results in a sustained breakdown below the $1225 support level, further losses for the precious metal could begin targeting major downside levels at $1190, which is also around the key 38% Fibonacci retracement of the noted three-month bullish run, and then the $1170 support level. To the upside, in the event of a rebound and then breakout above the recent $1280 double-top, a continuation of the three-month uptrend will have been confirmed, with further upside resistance targets at $1300 and then $1345. 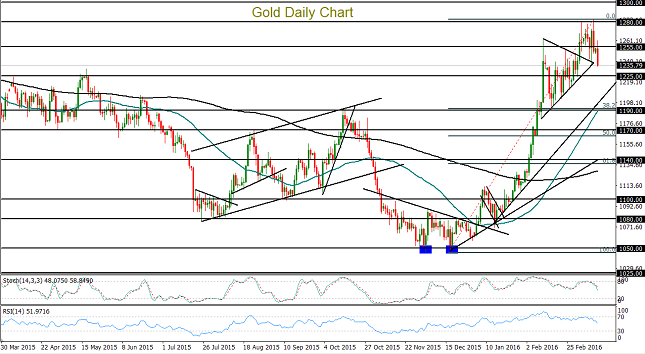