Gold ended higher for the second and silver for the third straight week on Friday ahead of the long weekend. The precious metals had been supported by a falling dollar, which last week hit its lowest level since early November against a basket of foreign currencies. That was last week, this week things might very well be very different. After all, the Dollar Index actually ended higher last week, albeit only moderately. The greenback may be due a stronger recovery ahead of this week’s US jobs data and the Federal Reserve meeting next month. If so, this could weigh on buck-denominated precious metals, especially if we also see further new all-time highs on Wall Street which in turn may dampen the demand for perceived safe-haven assets, including gold and silver.

The Dollar Index’s rebound last week was chiefly in response to the EUR/USD ending its own rally. The single currency had been rallying up until now on hopes that recent improvement in economic activity in the Eurozone would encourage the European Central Bank to start tightening its policy. However, those hopes have been dashed by Mario Draghi, the ECB President, who said that “an extraordinary amount of monetary support” is still needed. Although off its low, the EUR/USD has broken back below 1.12 handle. The possibly of an early election in Italy and renewed concerns about Greece are additional factors that could weigh on the euro this week. The dollar meanwhile could get a more profound boost if we see a surprise improvement in incoming US economic data.

In fact, gold was responding to a key resistance area at the time of this writing. As can be seen, the precious metal has turned lower after failing to hold its own above the highs of last week and Monday’s ranges. This on its own is usually a bearish sign as it shows the bulls are unwilling to bid the market any higher, but more so because of the fact that this apparent fake out has occurred near the $1265-70 old support area, now resistance. With the long-term bearish trend line still holding firm, the yellow metal could drop sharply if further support levels such as $1259 start to break down. 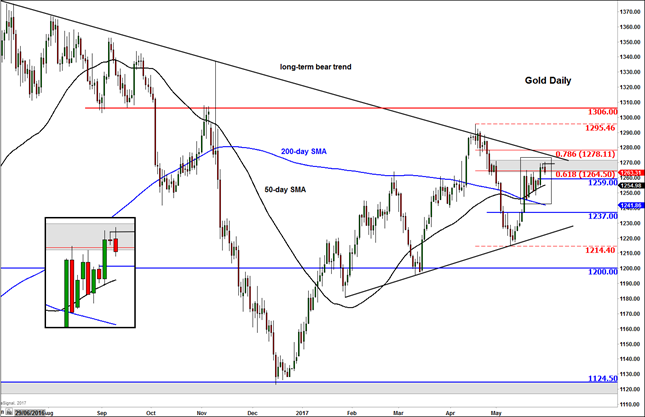