Gold melts down as dollar and yields heat up

The rebounding US dollar, rising government bond yields and the still-buoyant stock markets are helping to generate significant headwinds for gold.

The rebounding US dollar, rising government bond yields and the still-buoyant stock markets are helping to generate significant headwinds for gold.  The shiny metal is priced in US dollars and with the greenback rising, this is the main reason behind today’s sell-off. On top of this, the rising government bond yields further reduce the appeal of the noninterest-bearing commodity, while the rebounding European stock markets makes the safe haven asset even less appealing. So, for gold to come back, it needs the dollar, stocks and/or yields to head back south. At the moment, I am struggling to think what may weigh on the dollar, with the heads of the ECB and BOJ both likely to re-iterate their dovish policy stances this week. US stocks may come under pressure in the event the upcoming company earnings disappoint expectations, or if yields rise rapidly further. However, the outlook for EU stocks remain positive and they could extend their gains further. With both the pound and euro weakening relative to the dollar, this makes European export names attractive while foreign earnings could get a boost from the slightly weaker exchange rates. Furthermore, with geopolitical tensions easing, demand for safer assets is probably falling. So, the outlook for gold doesn’t look great at all, as things stand.

Gold’s poor showing should actually surprise no one. After all, gold once again failed to hold its own above last year’s peak at $1357 following its latest breakout attempt a couple of weeks ago. The repeated failure to break this level means the bears are only growing in confidence and this increases the odds of a breakdown. In fact, gold has now broken below its bullish trend line after taking out support at $1335. This $1335 level is going to be pivotal in the short-term outlook now. For as long as the metal stays below it, the short-term bias would remain bearish. If we go above it, then there’s a possibility for price to go towards the next resistance at $1341/2. The long-term bias would only turn bullish if and when we get a decisive break above that the 1$357 hurdle. If the selling pressure does not abate then gold could drop to the next support at $1318 very soon. Below this level, there’s nothing significant in terms of support until the pivotal $1300 level. In addition to this being previously resistance, we have the 50% retracement level converging with the 200-day moving average here, too. So, should gold get down to $1300, we may get at least a bounce here due to the convergence of several technical factors. 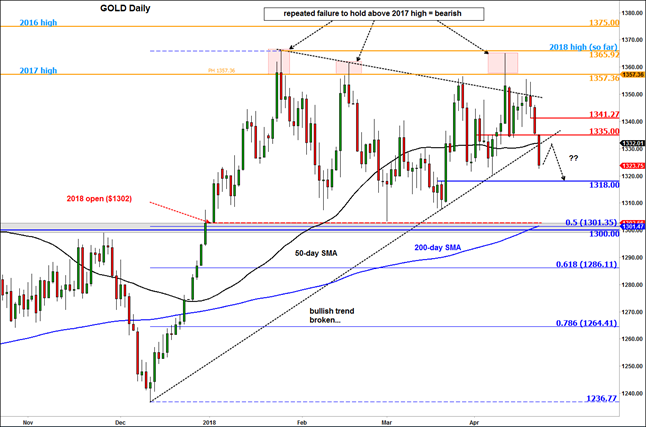