Gold and silver have started the new trading week, month and quarter on the back foot today. At the time of this writing, gold was trading at $1312 and silver was below $19.00 per troy ounce once again.

Gold and silver have started the new trading week, month and quarter on the back foot today. At the time of this writing, gold was trading at $1312 and silver was below $19.00 per troy ounce once again. The buck-denominated precious metals have been undermined by a small rebound in US dollar thanks to a stronger-than-expected reading on the ISM manufacturing sector PMI for September. Rising oil prices have also helped to underpin energy stocks and concerns over Deutsche Bank have eased. While the US equity markets have made a lacklustre start to today’s session, sentiment overall remains positive. Indeed, the UK’s FTSE 100 is closing in on that psychological 7000 handle again even though Prime Minister Theresa May has made it clear that Article 50 will be triggered before April of next year, paving the way for Britain to leave the EU in 2019. Some speculators clearly find better value in the still-buoyant equity markets and they consequently don’t want to tie up their trading capital in the safe-haven gold and silver.

This week though, there are plenty of US macro data to look forward to which could have a big impact on the near-term direction of the dollar, and in turn buck-denominated precious metals. So, while they appear to be out of favour now, gold and silver could make a comeback if the incoming US data, especially the nonfarm payrolls report on Friday, turn out to be mostly weaker than expected. However if the numbers are generally strong then

However gold does appear to be on a shaky footing, at least from a technical point of view anyway. The metal has now spent the best part of three months beneath its bearish trend line that has been in place since the year 2011 (see the inset). Meanwhile on the main daily chart, one can see that the bounce off the bullish trend line around the $1316 level on Thursday quickly ran out of juice and the metal has now moved below this level. At the time of this writing, gold was still holding above a shorter-term uptrend, which comes in at $1308. But if the buyers fail to hold their ground around these levels then the precious metal may drop towards $1300 again, and then potentially head further lower towards the 200-day moving average at $1255 should the dollar stage a more noticeable rally. This bearish outlook would become invalid upon a potential break above Friday’s high at $1328 or preferably above the $1342 resistance level. 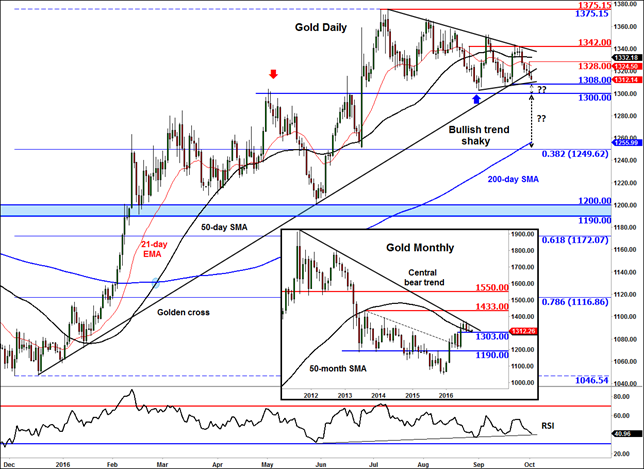