Gold on the brink as dollar and yields heat up

When stocks fall, the conventional wisdom is that safe haven gold would rise, and vice versa. But when stocks fall because of rising bond yields, it is a different story.

When stocks fall, the conventional wisdom is that safe haven gold would rise, and vice versa. But when stocks fall because of rising bond yields, it is a different story. That’s because, rising yields are equally if not more bearish for gold. Unlike in the case of equities and bonds, holding the yellow metal either in the psychical or paper form pays no dividend or interest, and costs money to store. So when yields rise, this reduces the appeal of the shiny metal for yield-seeking investors. Unfortunately for gold, it is not just yields that are on the rise, but the US dollar too. The Dollar Index is holding above a key area in the mid-95.00s as my colleague Matt Weller highlighted in his report yesterday HERE. With gold being priced in the dollar, the greenback’s volatility will have a direct impact on the metal’s prices and at the moment it is offering downward pressure.

So, gold – the buck-denominated and noninterest-bearing precious metal – has so far been unable to showcase any of its safe haven properties thanks to a strong dollar and rising bond yields. Gold will struggle to sustain any rally unless at least one of these influences are no longer at work. What it means for this week is that if gold has any chance of a comeback, then the bulls better hope that we get surprisingly weak US inflation figures in mid-week. However, if the PPI and CPI figures point to higher price levels in the US then investors will become even more convinced about the prospects of four more rate hikes from the Federal Reserve by the end of next year. As a result, the dollar and US bond yields might strengthen, further pressurising gold.

Thus, the path of least resistance continues to remain to the downside, especially after short-term support around $1196/7 broke down yesterday which probably triggered a cluster of sell stop orders that were resting below that level. If the next level support around $1181/83 breaks down then the next target for the bears will be the liquidity pool below the mid-August low at $1160 next, with the 2017 low at $1146 being an attractive level. However, in the event that gold rises, the outlook would only turn bullish – as before – if its breaks and holds above that $1205-15 resistance area. 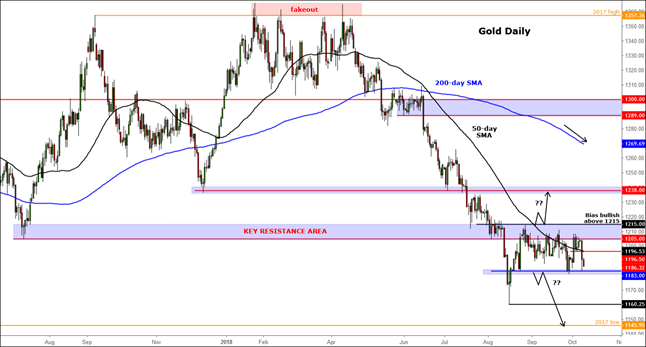