In the immediate aftermath of Wednesday’s FOMC statement, in which the Fed held rates steady as expected while still acknowledging improved economic conditions, gold spiked down on the mildly hawkish elements of the statement. Shortly after, however, as the markets digested the Fed’s characteristically non-committal comments that gave no indication as to the potential timing of a future rate hike, the precious metal surged on the continued interest rate uncertainty.

In the immediate aftermath of Wednesday’s FOMC statement, in which the Fed held rates steady as expected while still acknowledging improved economic conditions, gold spiked down on the mildly hawkish elements of the statement. Shortly after, however, as the markets digested the Fed’s characteristically non-committal comments that gave no indication as to the potential timing of a future rate hike, the precious metal surged on the continued interest rate uncertainty.

Prior to Wednesday’s surge, the price of gold had been in retreat mode, pulling back from the new two-year high around $1375 that had been reached less than three weeks ago. This pullback was partly due to gold’s diminished safe-haven appeal as equity markets hit new record highs, and also partially driven by anticipation of a more hawkish Fed in the wake of improving US economic data and declining concerns over Brexit.

From a technical perspective, Wednesday’s Fed-driven bounce tentatively preserved gold’s uptrend that has been in place since the end of May. This shorter-term uptrend, which is supported by a clear two-month trend line, lies within the context of a larger parallel uptrend channel that extends back to the $1050-area lows of late last year.

While Thursday saw an initial pullback after Wednesday’s surge, if gold is able to remain above both its noted two-month trend line as well as the key 50-day moving average, the prevailing easing trend of global central banks along with the prolonged hesitation by the Fed to raise interest rates could lead to an extension of the precious metal’s medium-term uptrend. In this event, the price of gold could once again target the noted $1375 high. With any further breakout above that high, the next major upside resistance target is around the $1420 level. In the opposite event of a sustained breakdown below the two-month trend line and 50-day moving average, strong downside support resides at the lower border of the noted parallel uptrend channel. 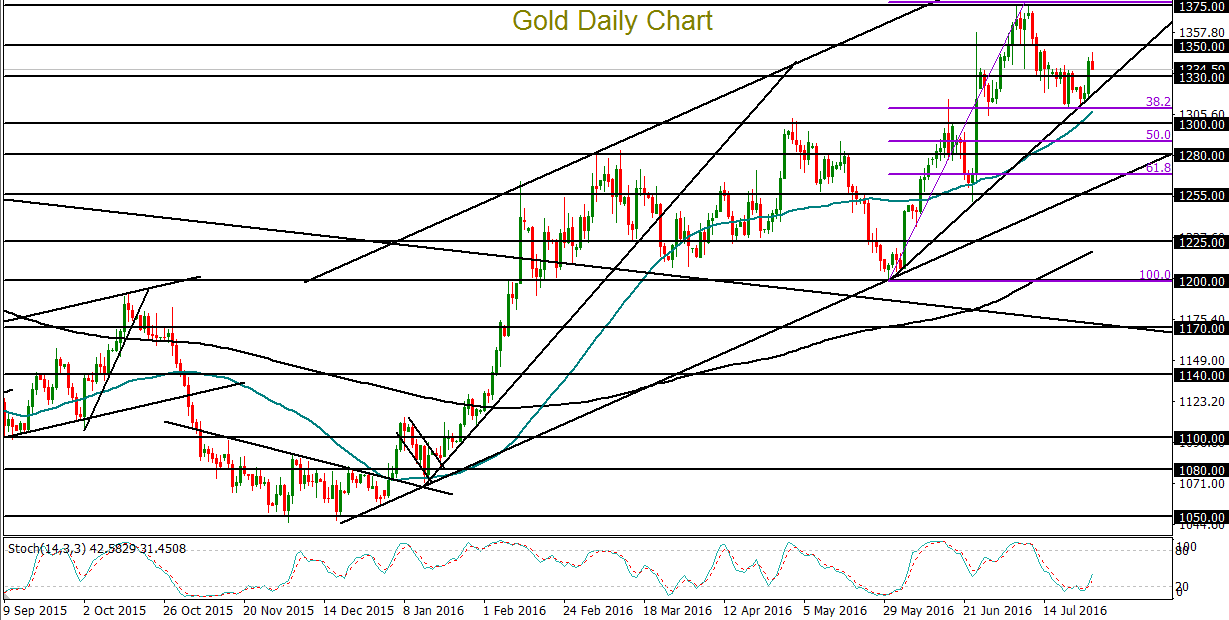