<p>The price of gold less than a day ahead of Britain’s EU referendum hangs by a very thin thread. Since late last week, when market concerns over a potential Brexit began to wane, that thread has become even more tenuous. The precious metal has been falling for the past week from last week’s long-term high above $1300 resistance as the Remain campaign within the Brexit debate has regained some momentum in recent days. Still, despite volatility in recent polling, the overall picture continues to show an exceptionally tight race, with polls of polls showing the two sides essentially even.</p>

The price of gold less than a day ahead of Britain’s EU referendum hangs by a very thin thread. Since late last week, when market concerns over a potential Brexit began to wane, that thread has become even more tenuous. The precious metal has been falling for the past week from last week’s long-term high above $1300 resistance as the Remain campaign within the Brexit debate has regained some momentum in recent days. Still, despite volatility in recent polling, the overall picture continues to show an exceptionally tight race, with polls of polls showing the two sides essentially even.

A pro-Brexit outcome could prompt an extensive surge in gold for a couple of reasons. Such an outcome would likely promote financial and economic turmoil throughout Europe as well as across global markets, which could reasonably lead to further buying of safe haven assets, of which gold is a primary one. Also, a Brexit would likely preclude a US rate hike by the Federal Reserve, at least for the immediate future, which would provide less of a reason for investors to abandon non-interest-bearing gold in favor of a higher yield. Finally, if the Fed continues to maintain a dovish stance in a post-Brexit environment, the US dollar could continue to be pressured, which would, in turn, give a further boost to dollar-denominated commodities like gold.

In sharp contrast, a Remain outcome could very well help cut the thread currently holding up gold prices, leading to a potentially substantial drop for the precious metal. In that event, with Brexit-related risk off the table, gold could likely lose its safe haven appeal, leading to a quick sell-off. Additionally, the Fed could then be given a green light to resume its monetary tightening aims, provided US employment data stages a strong reversal after last month’s very disappointing jobs numbers. Any rise in US interest rates could lead to a rapid abandonment of gold.

From a technical perspective, as noted, the price of gold retreated from the key $1300 resistance area late last week and has been in a modest pullback since then. On Wednesday, a day before the referendum, this pullback reached back down to gold’s 50-day moving average. Since the end of last year, the precious metal has been trading in a strong uptrend, staging a sharp recovery from its December long-term lows.

Whatever the referendum’s outcome may be, volatility promises to be high during and in the immediate aftermath of the voting. A pro-Brexit result could prompt a strong breakout above the noted $1300 level, continuing the recent recovery for gold. Such a breakout could lead to a further recovery towards the $1400 target area and beyond. A Remain win, in contrast, could likely lead to a strong extension of gold’s current pullback under its 50-day moving average, which could open the way to further losses towards $1200 support, last hit less than a month ago in late May. 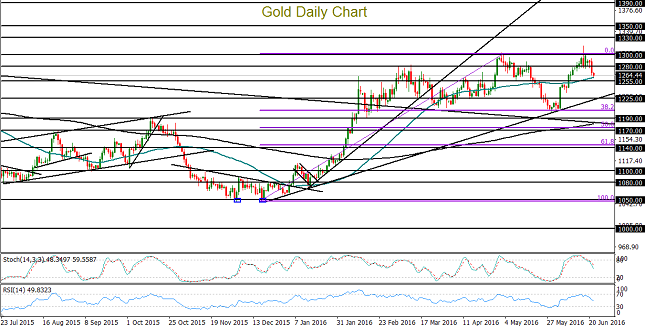