Gold’s 10 per cent rally since early December has certainly been impressive, but not a surprise given the on-going stock market turmoil and dollar weakness. The precious metal obviously pays no interest or dividends, and costs money to store. But then again with central bank currency war being at full throttle, yields are universally low or come with undesirably high risks. Given the current level of investor pessimism about the global economy, investors are unsurprisingly not showing much enthusiasm about riskier assets like stocks. Consequently, they appear to be moving back into cash or the perceived safe haven assets such as gold and silver. This is reflected in the strong inflows into gold ETFs.  According to Bloomberg data, an additional 4.8 tons of gold were added yesterday, bringing the total ETF inflows since the start of the year to a solid 86 tons. If ETF inflows continue at this pace, the price of gold could extend its gains sharply in the coming weeks. The physical demand for gold is also likely to have risen due to jewellery purchases ahead of the Chinese New Year celebrations, which starts on Monday.

But jewellery demand could be more subdued after the Chinese New Year, and there’s also potential for significant profit-taking from ETF speculators. Indeed, gold’s good run of form could easily reverse if for example the equity markets recover their poise and/or the dollar manages to rebound sharply. This could happen, say, as a result of a sudden improvement in economic data, starting with today’s US jobs report. If seen, investors may readjust their expectations about the next Fed rate hike, which would increase the relative opportunity cost of holding gold. That being said, the leading employment indicators that were published throughout this week point to a weaker growth in the number of jobs created last month. Indeed, the consensus expectation is centred around 190 thousand jobs, a much weaker performance than for example 292 thousand jobs that were created in December. However, the actual figure could undershoot even this number, with my colleague Matt Weller’s model for example pointing to a headline NFP reading of just 160 thousand jobs. So, there is a scope for disappointment, especially when you consider the fact that analysts are expecting a 0.3% rise in earnings over the month or a steady rate of unemployment at 5.0 per cent.

Should the jobs data disappoint and/or otherwise the dollar falls, gold could extend its gains further. With the metal trading at a good $1158 per troy ounce at the time of this writing, it was holding its own almost $30 above the 200-day moving average at $1130. This is important because in the past couple of times when gold attempted to rise above this moving average, the follow-up gains were relatively mild. It suggests that we could be in the process of a much larger recovery. But as the metal is still below a long-term bearish trend, one should proceed with caution as the run could potentially end soon or at least pause for breath, particularly because the Relative Strength Index (RSI) is once again at the ‘overbought’ threshold of 70 and above. Traders should watch their resistance levels carefully now. The immediate potential hurdles could be the 78.6% Fibonacci retracement level of the last significant downswing, at $1160, followed by the 261.8% extension level of the last mini correction at just shy of $1180, with the latter also being a pivotal level on larger time frames. Thereafter, there is not much further resistance until the $1190/92 area – the October 2015 high. Watch for a potential false break or double top reversal pattern to emerge around this area, should we get there. Otherwise, gold may make a run towards the long-term bear trend around $1200 and potentially higher. The previous resistances such as $1155 and $1130 could be the new potential support levels to watch. 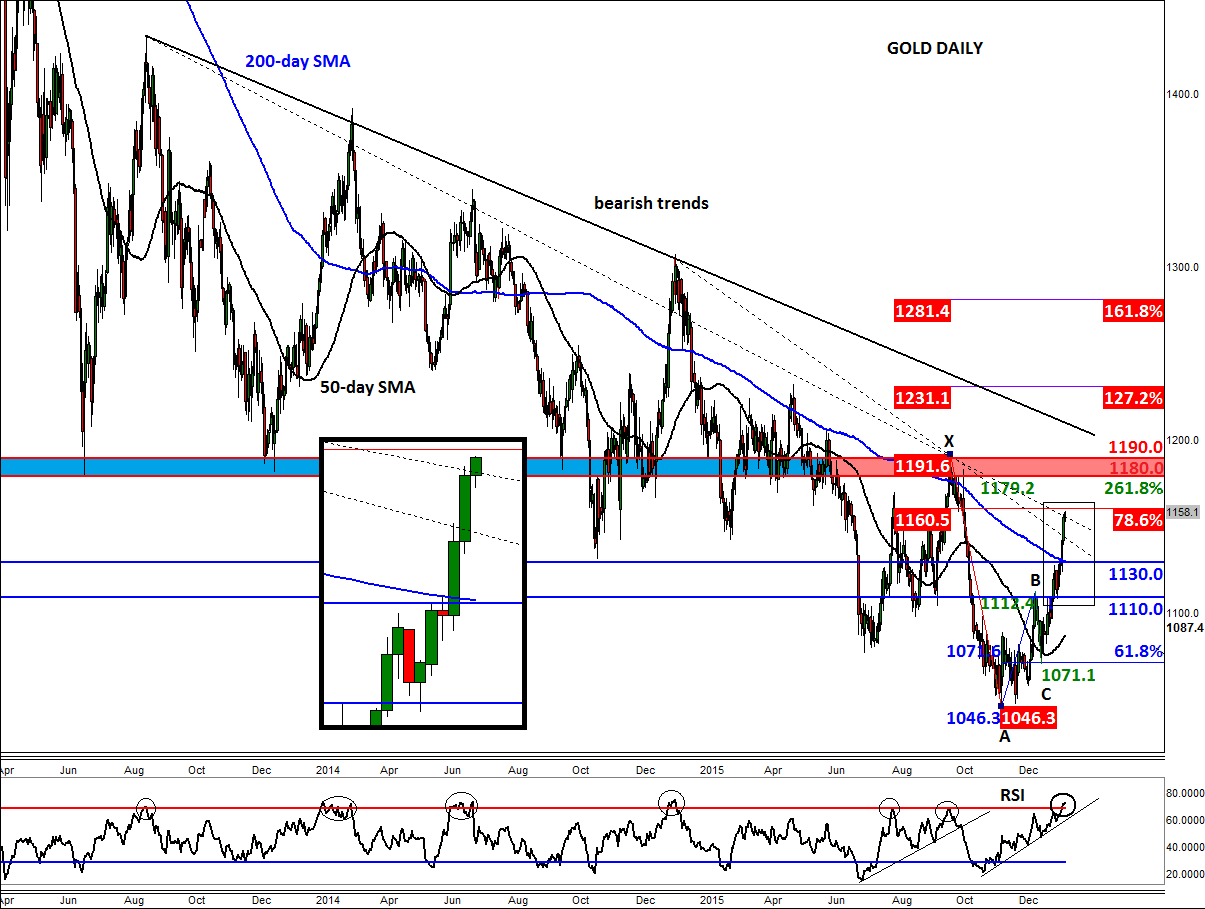