Gold on shaky footing as dollar surges to highest since 2003

Sentiment towards gold remains and grows negative by each passing day. The perceived safe-haven metal’s recent big plunge has been in part due to a sharp improvement in risk appetite, as highlighted for example by the rally in US equity prices. In addition, benchmark global bond yields have been rising, further damaging the appeal of the noninterest-bearing precious metal. But it is the dollar which is exerting the most pressure on the buck-denominated gold, as after all the metal in euro terms is still positive on the week

Sentiment towards gold remains and grows negative by each passing day. The perceived safe-haven metal’s recent big plunge has been in part due to a sharp improvement in risk appetite, as highlighted for example by the rally in US equity prices. In addition, benchmark global bond yields have been rising, further damaging the appeal of the noninterest-bearing precious metal. But it is the dollar which is exerting the most pressure on the buck-denominated gold, as after all the metal in euro terms is still positive on the week (see the inset).

With the Dollar Index breaking out above the 100 level to its highest point since April 2003, gold could be on the verge of a more significant correction than we have so far witnessed. The Fed’s chief Janet Yellen has more or less confirmed yesterday that a December rate rise is forthcoming as a delay could result in the FOMC having to “tighten policy relatively abruptly to keep the economy from significantly overshooting both of the Committee's longer-run policy goals." What’s more, holding rates at current levels for too long “could also encourage excessive risk-taking and ultimately undermine financial stability." Consequently, market participants are evidently moving away from gold with ETF investors in particular taking no chances: outflows from gold-backed ETFs have been ongoing for several weeks now. The ETF accumulation since July has been virtually wiped out.

Technically, gold does appear oversold at the levels and a short-term pullback cannot be ruled out, especially around these technically important areas. However, the trend remains decidedly bearish and with the dollar breaking out to multi-year highs, any short-term bounces could be sold into by bearish speculators. That being said, our bearish outlook would become weak if gold were to climb back above the prior support area between $1241 and $1250. But even so, the trend would still remain bearish until and unless gold forms a higher high above $1337 (a tall order).

Meanwhile the 50-day moving average looks set to cross below the 200. When the averages are in this particular order (which is bizarrely called a “death cross”) some trend followers tend to only focus on selling rather than buying setups. So, the pressure on gold may increase from this group of speculators. Thus, the path of least resistance remains to the downside for now, even if we were to see some short-term bounces here and there. The next level of support is the psychologically-important $1200 mark, although a more significant support level is at $1190 which was formerly resistance. Given the technical damage, we reckon that gold could eventually fall much lower than these levels before we see a bottom – possibly around the long-term 61.8% Fibonacci retracement level at $1172. 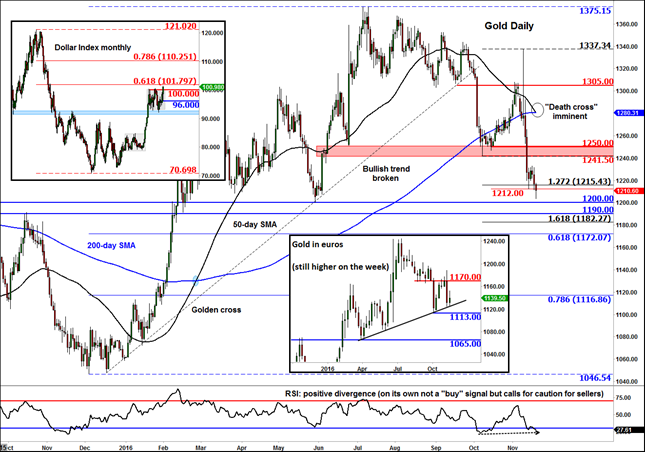