Gold’s sharp rally off December’s low of $1046 has seen its price rise more than 17 per cent in the space of a few weeks. At the time of writing today, the precious metal was trading at just shy of $1230. Gold’s sudden waking from its slumber has caught many people by surprise, myself included. Likewise, the stock market plunge has lasted a lot longer than what most people had probably envisaged when it first started to descend. Clearly, gold’s status as the ultimate safe haven asset has well and truly been confirmed, yet again. The buck-denominated precious metal has also benefitted from a weaker dollar as hopes about further 2016 rate rises from the Federal Reserve have basically been dashed. Janet Yellen, the Fed’s Chairwoman, more or less confirmed that no further rate rises are on the horizon at her testimony yesterday. Consequently, the opportunity cost of holding the yellow metal, which pays no interest, has been reduced on a relative basis. Hence, investors have rushed back into gold, as evidenced, for example, by the continued inflows into gold-backed ETFs.  The only thing that could stop gold now is if the dollar and/or stocks rebound strongly; unlikely events. That being said, there will be some US data out on Friday which could potentially provide some support to the dollar, while stocks could rebound on potential intervention from a major central bank or if oil bounces back, with WTI now being below $26.50 a barrel!

On the physical side of the equation, demand for gold in the fourth quarter of last year jumped 4% year-over-year according to the World Gold Council. Investment demand rose 15% while central banks expanded their purchases by a further 25%. Due to weaker demand in the first half of 2015, total gold demand was slightly lower than the previous year, however.  Clearly, the lower prices of gold led to a significant rise in demand in the second half of 2015, especially for coins, bars and jewellery.  China maintained its position as the largest consumer of gold, followed closely by India.  Going forward, the WGC thinks that demand from both nations is set to rise in 2016.

Nearly all of the short-term resistance levels have broken down with so much ease, suggesting that gold could be in the process of a major upward cycle. Looking at the long-term weekly chart, below, there is still some potential resistance that it needs to clear in the range between $1230 and $1250. Here, the upper resistance trend of a bearish channel meets the shallow 23.6% Fibonacci retracement level of the entire 2011-2015 downswing.  This channel has been in place since 2013, and given the overbought conditions on smaller time frames, the precious metal may at the very least pause for breath here.

That being said, the break above the 55-week average has been sustained, while the ease at which other short term resistances have broken down is also noteworthy. Added to this, the momentum indicator RSI had already formed a triple divergence with price, correctly suggesting that the selling pressure was waning towards the end of 2015. All of these indications point to a break out of the channel. If seen, gold could potentially rise towards its 200-week average at $1345 or even test the long-term bearish trend and 38.2% Fibonacci level at $1380.

Now that the key resistance at $1190 has broken down, the buyers will be happy for as long as price holds above this level. In the event that it breaks back below this level however, fresh selling pressure could resume. For now, all the focus is on the $1230-50 range, which as mentioned, marks the resistance trend of the bearish channel and 23.6% Fibonacci level. 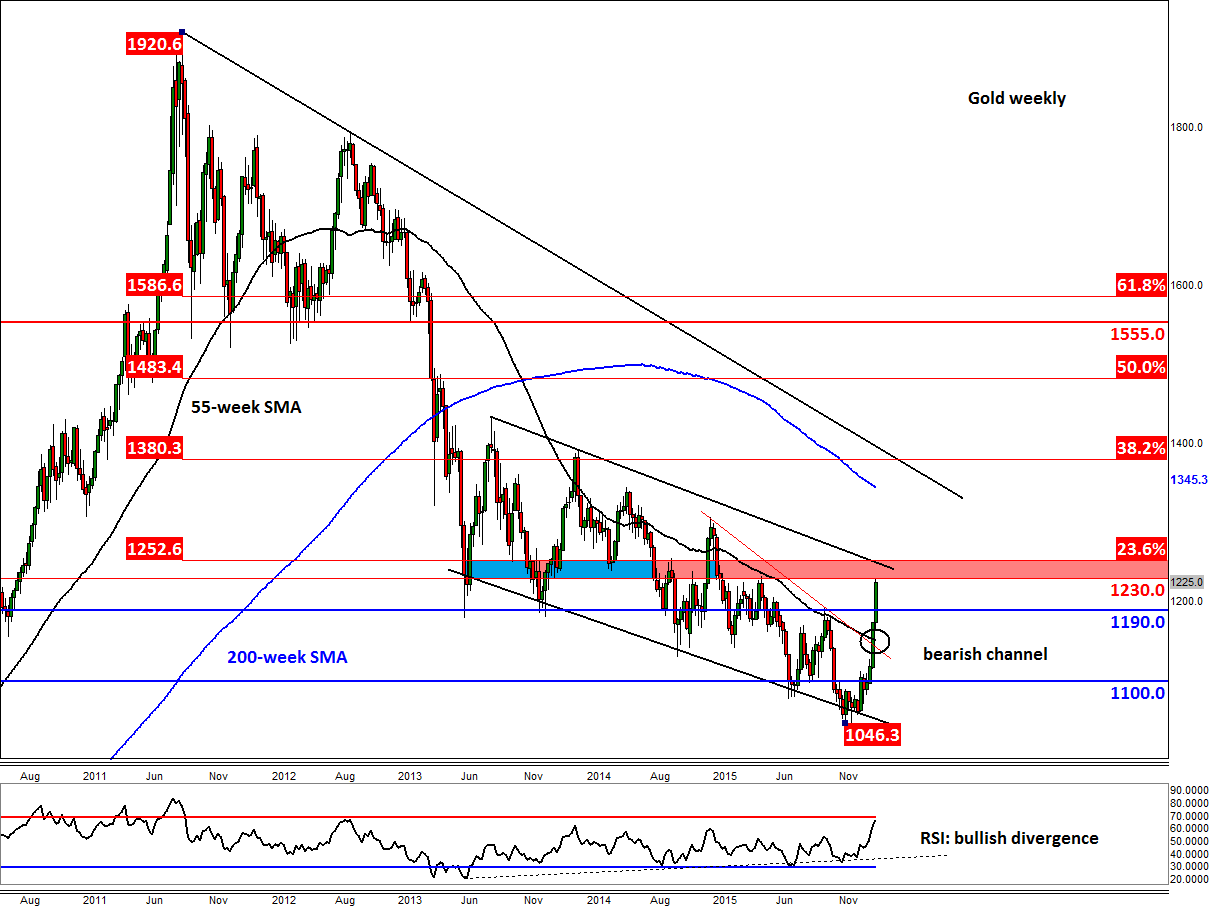