His comments were hawkish and so they caused a sharp sell-off in Treasuries, which pushed the benchmark 10-year bond yield back above 2.9%. As a result, the dollar rallied sharply and noninterest-bearing commodities like gold and silver tanked.

Today all eyes were on the new Federal Reserve Chairman Jerome Powell, who was testifying for the first time since taking charge. Markets were watching to see if Mr Powell would suggest if there will be more rate hikes than the expected three this year. While he shied away from giving anything specific, he did point out that “each of us is going to be taking the developments since the December meeting into account and writing down our new rate paths as we go into the meeting.” He added that his personal outlook on the economy had strengthened since December and that he saw inflation was advancing towards the bank’s 2% target. His comments were hawkish and so they caused a sharp sell-off in Treasuries, which pushed the benchmark 10-year bond yield back above 2.9%. As a result, the dollar rallied sharply and noninterest-bearing commodities like gold and silver tanked. Stocks also eased back although their losses were contained.

Could a potential stock market correction save gold?

There has been some suggestions that despite the rising yields and the rebounding dollar that gold will be able to find demand amid concerns over a stock market crash. We don’t entirely agree with this argument. While I think that the stock markets are severally overvalued and soon or later we will see a nasty correction, the bullish exuberance and – dare I say – irrationality could last several further months before that happens. When it does finally happen, this could provide some support for safe haven gold. However, with yields elevated and the dollar on the verge of a potential comeback, there are good reasons why some investors would think twice about holding paper gold as a hedge against a stock market drop. Indeed, there may be better hedges in the form of options for stock market participants.

As we have been pointing out in recent days, the metal’s inability to hold above the 2017 high of $1357 has made us rather cautious even if other technical indicators point to an eventual breakout. As gold is still residing above the 200-day moving average, which is also pointing higher, this objectively tells us that the long-term trend is indeed bullish. However, it is just that we don’t like the price action around last year’s high from a bulls’ point of view. In fact, the bears would point to the failed breakout attempts as signs that the trend is turning lower, with Friday’s bearish engulfing candle providing some confirmation. If that wasn’t enough, today breakdown further bolsters the bears’ case.

At the time of this writing, gold was trading around $1315, so it was below both the 50-day average ($1323) and the 38.2% Fibonacci retracement level ($1316.5). If the selling pressure persists, then the metal’s next stop could be around $1300 given that there’s nothing significant in terms of support apart from that pivotal long-term psychotically hurdle. Below $1300, the next potential support is at $1286. This level marks the confluence of the 61.8% Fibonacci level with the 200-day moving average. On the upside, resistance comes in at $1321/2, followed by $1327 and then $1345. These levels were the old support levels, so they could turn into resistance. If these levels fail to hold gold down then it will be very likely that gold will go on to take out that $1357 at the fourth time of asking. But we will cross that bridge when and if – a big if – we come to it. 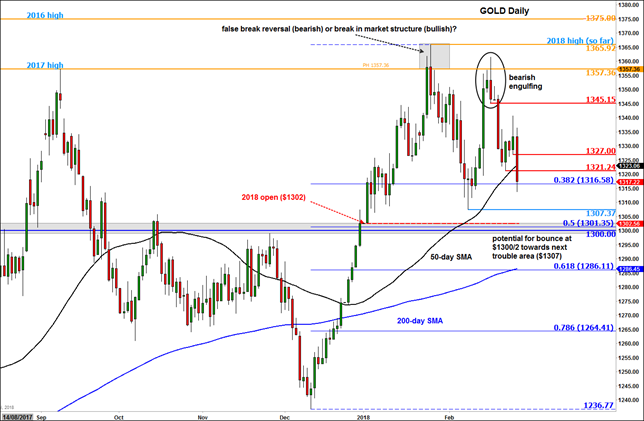