Wednesday’s release of minutes from the last FOMC meeting on January 31 – February 1 struck a slightly more hawkish tone as Fed members discussed the appropriateness of another rate hike “fairly soon.” At the same time, however, concerns over the risks and uncertainties surrounding the Trump Administration’s fiscal stimulus plans as well as a strengthening US dollar tempered that hawkish stance. In the end, markets were once again left with continued ambiguity regarding the pace of monetary policy tightening in the coming months. Indeed, the Fed Fund futures market still saw a low percentage probability of a March rate hike – in the high-teens to low-20’s – a day after release of the FOMC minutes. This sustained policy uncertainty helped weigh on the dollar while boosting the price of gold further.

Despite the virtually unrelenting rally in US and global equity markets, geopolitical risks continue to abound, particularly in Europe. Article 50, which officially begins the process of separation between the UK and European Union (“Brexit”), is slated to be triggered no later than in March. A former European Commission official has recently stated that the triggering of Article 50 could lead to a “complete breakdown” of UK/EU relations.

Additionally, France’s far-right, anti-EU presidential candidate, Marine Le Pen, is leading in polls for the first round of the upcoming French elections. Although she is not currently favored to win against frontrunner Emmanuel Macron, any surprise victory by the populist/nationalist Le Pen will undoubtedly lead to serious questions about the future of the EU.

Amid these uncertainties in Europe as well as those in the US under the Trump Administration’s still-hazy policy trajectory and the Fed’s murky monetary policy, gold has continued to extend its sharp uptrend that began after price bottomed out around the $1125 support area in late December.

Having hit the $1250 level on Thursday, the price of gold has reached a critical technical juncture. This level also represents the 50% retracement of last year’s July-December downtrend. A strong breakout above this resistance on increasing global uncertainty could open the way towards a medium-term target around the key $1300 resistance area. However, any clear turn-down from around the current levels would highlight the strength of the current resistance, potentially leading to a short-term pullback to the $1220 support level. 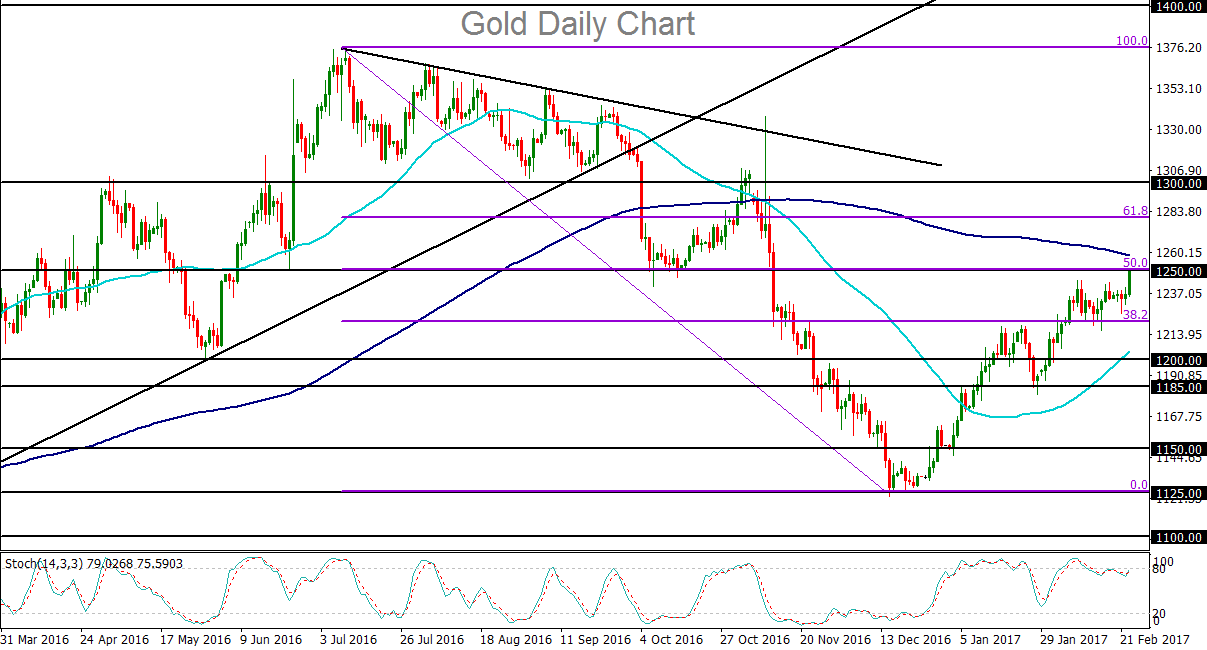