<p>The price of gold hit a new March low on Wednesday after relatively hawkish comments from US Federal Reserve officials weighed on the precious metal and boosted the US dollar. As a result, gold dipped below $1225, a key support level.</p>

The price of gold hit a new March low on Wednesday after relatively hawkish comments from US Federal Reserve officials weighed on the precious metal and boosted the US dollar. As a result, gold dipped below $1225, a key support level.

The comments from Fed members appeared to mitigate last week’s FOMC statement, which was widely seen as surprisingly dovish due to its significant lowering of expectations for US rate hikes this year. That dovish statement prompted a sharp and immediate sell-off last week in the US dollar along with a corresponding rise in gold.

Hawkish Fed statements generally pressure the price of gold for a couple of reasons. Since gold is a non-interest-bearing asset, rising interest rates increase the cost of gold ownership, thereby leading to a shift away from investment in the precious metal. This prompts a decline in demand and value. In addition, rising US interest rates generally lead to an increase in demand for the dollar. Since gold is denominated in dollars, there exists an inverse correlation between the two. Therefore, a higher dollar typically leads to a lower price for gold.

From a technical perspective, the current slide extends gold’s retreat from the new one-year high slightly above $1280 resistance that was reached less than two weeks ago. As of this writing, this drop has prompted price to reach down and hit a steep uptrend support line extending back towards the lows of mid-January. In addition, price has also dropped down to approach the important 50-day moving average.

Having hit a critical technical juncture, gold could have further to fall if it breaks down below the current support. With any further retreat for the precious metal that prompts such a breakdown below the noted trend line and moving average, further losses could push price back down towards progressively lower support levels at $1190, $1170, and $1140, which also correspond roughly with the key 38%, 50%, and 62% Fibonacci retracement levels of the sharp uptrend from mid-December to mid-March. 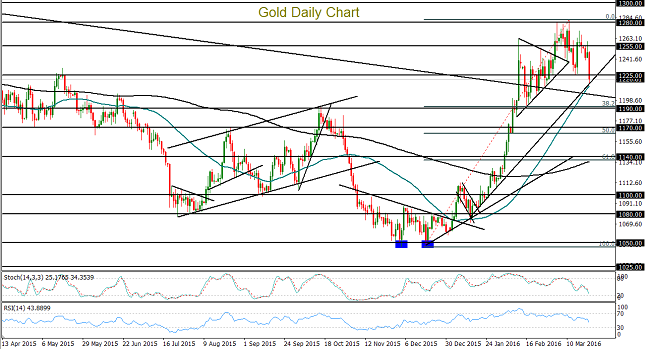