Gold: Two critical fundamental drivers and the importance of 1250

<p>After residing in traders’ doghouses throughout all of last year, everyone’s favorite yellow metal has been on much better behavior thus far in 2016.</p>

After residing in traders’ doghouses throughout all of last year, everyone’s favorite yellow metal has been on much better behavior thus far in 2016.

As we’ve noted before, the price gold is determined by the interaction of supply and demand, as with any commodity. While the supply of gold is relatively predictable in the short term, the demand for gold is not driven by the conventional industrial demand that drives most commodities. Instead, gold demand is driven primarily by its attractiveness as an investment, which is in turn driven by real interest rates and the value of the US dollar. 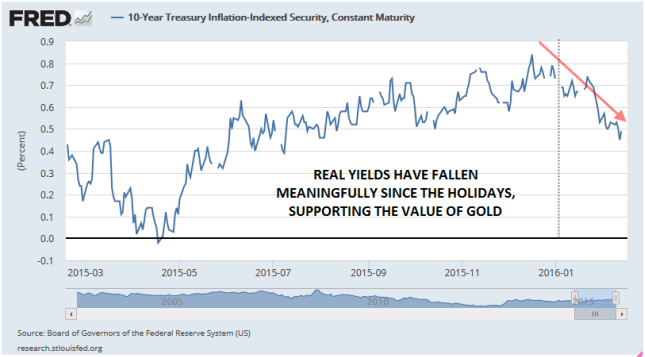 Fundamental Driver #2: The US Dollar

The other major fundamental driver of gold prices is the US dollar. Of course, gold is denominated in US dollars on the international market, so all else equal, a decline in the value of the dollar would increase the price of gold in dollars and vice-versa. Beyond this mechanical relationship, the US dollar has also been seen as a bit of a "risk" currency given the (relative) hawkish positioning of the Federal Reserve. Therefore, traders have been selling the greenback and buying safe haven gold as a result of the global market turmoil thus far this year, exacerbating the upside move in gold. As long as these conditions (falling real yields and a weak US dollar) remain intact, gold will continue to shine.

Everyone’s favorite yellow metal had a rough start to the week after stalling out in the key 1250-60 resistance zone, but based on the recent price action, we may be back testing that area before long. The metal dipped back down to test key previous-resistance-turned-support at 1195 on Tuesday, but the rally is showing signs of resuming so far today. Meanwhile, the MACD continues to trend higher above both its signal line and the "0" level, showing bullish momentum, while the RSI is holding at an elevated level above its own bullish trend line.

On a longer-term basis though, there is critical resistance in the 1250-60 zone, where two key Fibonacci levels converge (the 61.8% retracement of the drop off the March 2014 high and the 78.6% retracement of the fall from the January 2015 high). In addition, the top of the bearish channel that has contained gold prices since mid-2013 comes in at that same zone, so buyers will need to muster significant strength to break that barrier conclusively.

If gold can establish itself above 1260, further gains toward 1300 or higher are likely in the weeks to come, whereas a drop back below the key 1195-1200 zone would shift the medium-term bias back in favor of the bears. 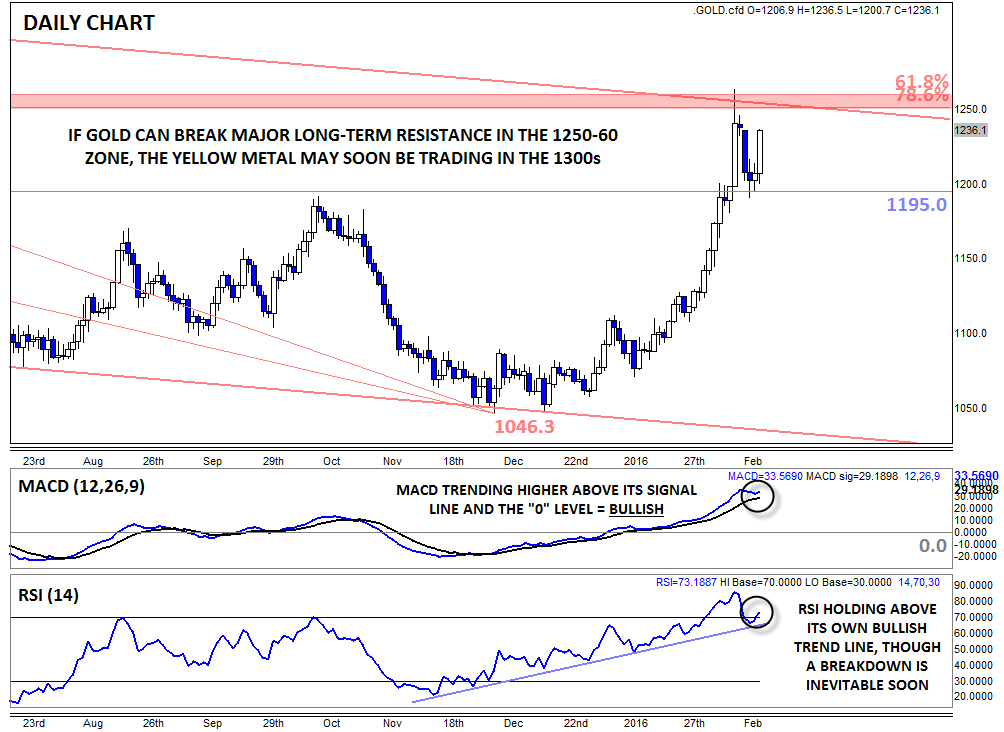