The culprit is the rising government bond yields boosting the dollar and making low and noninterest-bearing commodities like gold and silver less attractive to yield-seeking investors.

Gold has bounced off its worst levels, but it may be far too early to draw any conclusions from the rebound. Granted, I, for one, am a little bit surprised by gold’s sizeable pullback recently, especially given the simultaneous sell-off in the stock markets. The culprit is the rising government bond yields boosting the dollar and  making low and noninterest-bearing commodities like gold and silver less attractive to yield-seeking investors. But if yields stop rising, then gold has a chance to stage a comeback.  The metal may find further support if it turns out that the recent rally in the dollar was just a pullback in a downtrend, rather than a trend reversal. This may very well be the case, as so far the Dollar Index hasn’t broken a previous high to suggest the low is in for the greenback. But if the dollar were to make a more meaningful comeback then gold could break down regardless of the ongoing stock market volatility.

From a technical perspective, I am not too sure on gold’s near-term direction. When the metal broke above its 2017 high of $1357 towards the end of last month, but failed to hold above it, this was a big clue that it was going to head lower. And given that so many short-term support levels have been taken out since, gold now needs to print some bullish price action to suggest that the long-term trend is still bullish. In the short-term, a break above resistance at $1325 would be ideal, more so if the next level at $1332 also gives way. Should that happen, then gold may make another run towards the recent highs, and who knows, this time might go on to break decisively higher. However, if gold falls below the key $1300 support level again and holds below it, then it is game over for the bulls in my opinion. 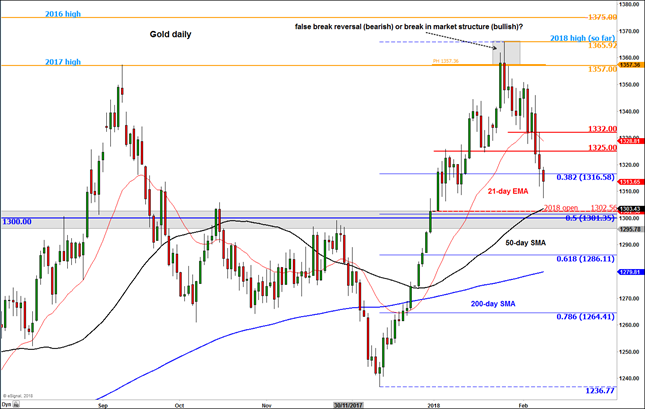