Gold: where to next?

Gold has been quietly edging higher in recent weeks and today finds itself at just shy of $1110 per troy ounce. From its low point in December to the high it hit earlier this month, the metal has tacked on a good $65 or just over 6 per cent. Gold’s recovery has been driven almost exclusively by a rise in risk aversion, for the US dollar has also risen during this period. Global stocks have had their worst ever start to a year on fears about a global economic slowdown, most notably in China. At the height of the sell-off, the major global indices were down some 20% or more from their recent record or multi-year highs. When compared to the extent of the stock market’s decline, gold’s performance as a safe haven asset has therefore been poor. If stocks now manage to regain their poise then gold could quickly fall out of favour as investors unwind their safe haven trades. Nevertheless, the metal’s ability to withstand the slightly stronger performance of the US dollar cannot be ignored.

This week’s focus for gold traders, and indeed many other markets, will be the Federal Reserve meeting on Wednesday and Friday’s advance release of US GDP. Virtually no one is expecting the Fed to make any changes to monetary policy at this meeting. The key question is whether the central bank will continue its rate hiking cycle in March or postpone it until June or later. The hope is that the Fed’s policy statement will provide some clarity on this. But according to the Fed Fund Futures, the probability of a rate hike in March has fallen to below 30 per cent, which makes sense given the recent sharp rise stock market volatility and disappointing economic data. The odds for a rate increase in June are about 50 per cent. Thus if the Fed delivers a more dovish-than-expected policy statement, which would imply a later rate hike, then this should decrease the opportunity cost of holding gold. On the other hand, a more hawkish than expected statement would most likely cause gold prices to fall.

From a technical point of view, gold’s recent price action has been bullish and there may be further momentum left in its current move higher. Since hitting a fresh multi-year low of $1046 at the start of December, the metal has made a series of higher lows with the most recent one being around the 61.8% Fibonacci retracement level at $1071 in mid-January. From here, the metal has steadily risen to approach its recent range highs around $1110/12. A break above this area would probably clear the way towards $1136/8, which is where a clear Bearish Gartley pattern resides. There, the point D of an ABCD price pattern converges with the Fibonacci levels of two price swings: the 61.8% retracement of XA and 161.8% extension of BC. In addition, the 200-day moving average, at $1133/4, also resides in close proximity. Given the conflux of all these technical indicators, this is where we would expect gold to at least face some short-term resistance, should it get there in the first place. If gold breaks above here without much hesitation then it would suggest that we are in the process of a much bigger recovery. Meanwhile if gold fails to even break above the $1110/12 area and subsequently falls back decisively below $1100 then that could signal the end of the short-term bullish trend. 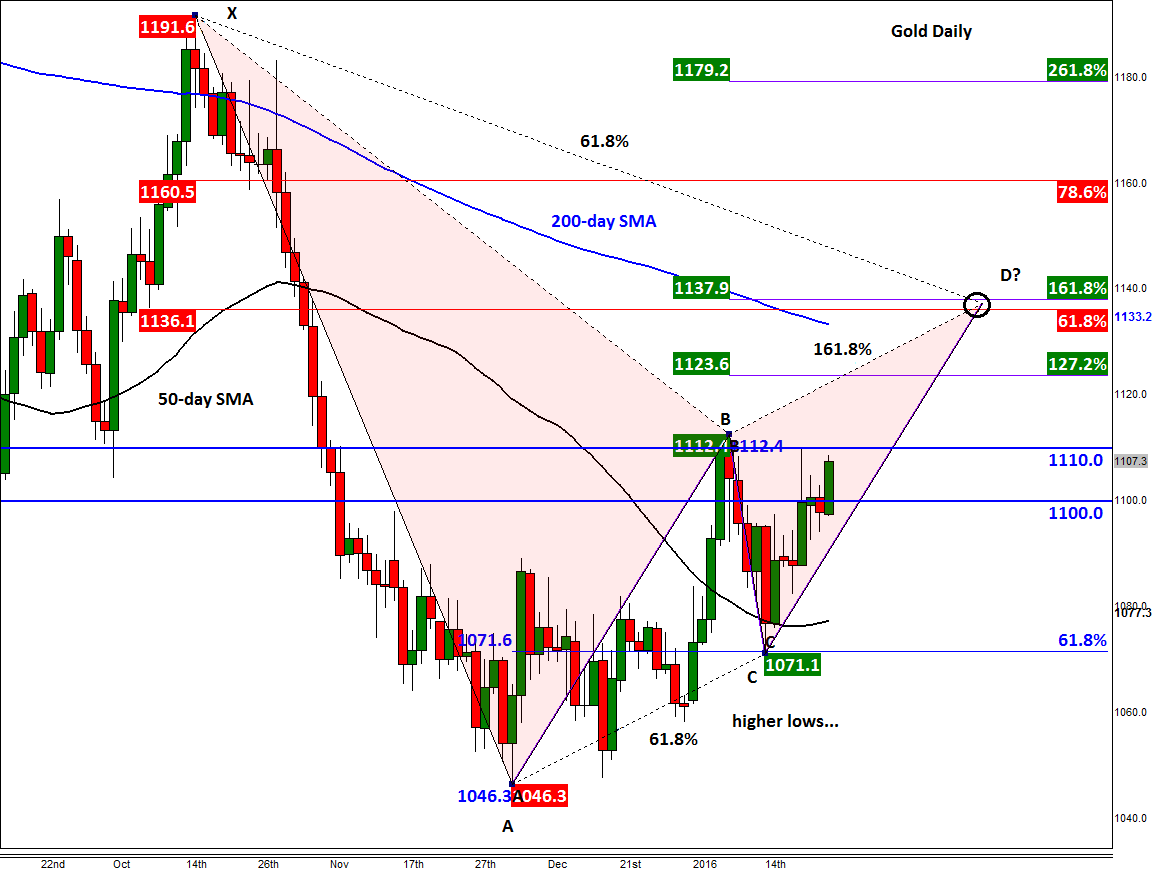