Oil prices have been driven higher by momentum in recent days and weeks as investors speculated about tighter market conditions amid the recent de-stocking of crude inventories, owing in part to reduced crude production from the OPEC and Russia.

Oil prices have been driven higher by momentum in recent days and weeks as investors speculated about tighter market conditions amid the recent de-stocking of crude inventories, owing in part to reduced crude production from the OPEC and Russia. But US shale oil output should rise with firmer prices, and this may keep the market amply supplied in the coming months. So, I would be very surprised if Brent oil goes significantly above $70-$75 or WTI north of $65-$70 a barrel.

In fact, crude oil may have reached a short- or medium-term peak already. I was interested to see what happened when Brent probed liquidity above its previous swing high of $69.60 hit back in 2015, yesterday. If there was acceptance above it then this would have pointed to further gains. However, it looks like the buyers have had enough, for now anyway. The London-based oil contract formed a reversal-looking pattern around this $69.60 handle and the psychological level of $70. After an initial break higher, it closed yesterday’s session almost where it had opened. As a result, a long-legged doji candle was formed. This particular pattern is occasionally found at the top of major trends.

If this is indeed the top, and given the overbought conditions, then at the very least I would expect to see a pullback towards the next level of support at $68 on the daily while the next weekly support is seen at $65.80. However if the above pattern is a ploy to trap the bears, and price goes on to make a new high for the year, then in this potential scenario I wouldn’t be surprised to see Brent eventually head towards $75 or even $77 next, with the latter being an old broken support level.

So, in summary, we may have seen Brent oil form a top. But it is far too early to say that with conviction. Acceptance below Thursday’s bearish-looking candle would bolster the sellers’ case, while acceptance above $69.60, the 2015 high, would be deemed bullish. Let’s wait and see what happens. 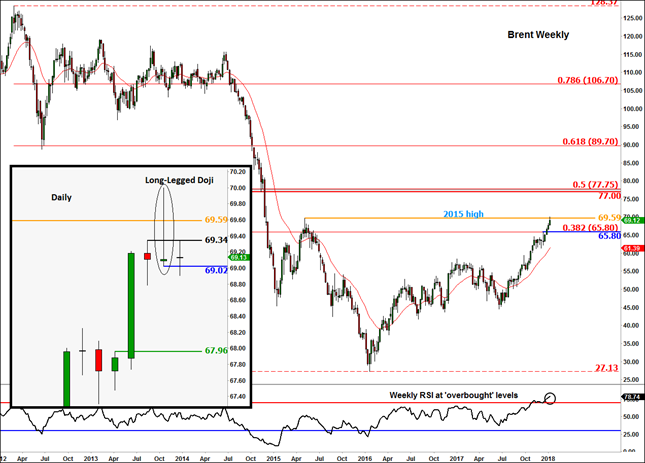