Has the gold recovery reached near exhaustion?

Since the beginning of the new year, gold has been on a sharp recovery, erasing more than half of its losses suffered after Donald Trump’s presidential election victory in early November. The recovery actually began in late December, when the price of gold lifted off its 10-month lows around the $1125 price area and quickly embarked on what has become a significant relief rally. Much of this rally has been tied to an overall pullback in the US dollar as the initial market-euphoria sparked by Trump’s pro-growth agenda began to wear down.

Since the beginning of the new year, gold has been on a sharp recovery, erasing more than half of its losses suffered after Donald Trump’s presidential election victory in early November. The recovery actually began in late December, when the price of gold lifted off its 10-month lows around the $1125 price area and quickly embarked on what has become a significant relief rally. Much of this rally has been tied to an overall pullback in the US dollar as the initial market-euphoria sparked by Trump’s pro-growth agenda began to wear down.

The direction of both the dollar and gold now hinge largely upon how events unfold after Trump is inaugurated as President of the United States on Friday. The ultimate path that the new Trump Administration will take with regard to economic growth is exceptionally uncertain at the current juncture. This uncertainty has been reflected in ranging, noncommittal market moves in the immediate run-up to the inauguration, especially within equity markets and the US dollar.

What continues to be rather certain, however, is that any of Trump’s key economic promises that he made prior to taking office will take significant time to implement, if indeed they are fulfilled at all. In turn, the Federal Reserve will take its cues from the path of US growth and inflation under Trump when it decides on the trajectory of monetary policy changes going forward. The longer-term fate of the dollar and gold, therefore, will rest to a large extent on the success of Trump’s fiscal stimulus plans and the Fed’s accompanying monetary policy moves.

In the meantime, though, if short-term expectations remain after inauguration that Trump will likely stay on his promised path, and the Fed also continues to emit hawkish signals of more rate hikes this year, the dollar could have much further to run and gold could see a continuation of its post-election plunge.

From a price perspective, gold just saw a significant pullback on Wednesday from Tuesday’s year-to-date high around $1218. That high was also around the 38% Fibonacci retracement area of its plunge from July-December of 2016. If the price of gold continues to fall below the $1200 psychological level as the Trump Administration eases into office, price could soon return to its December lows and fall further towards $1100 with rising interest rate expectations. 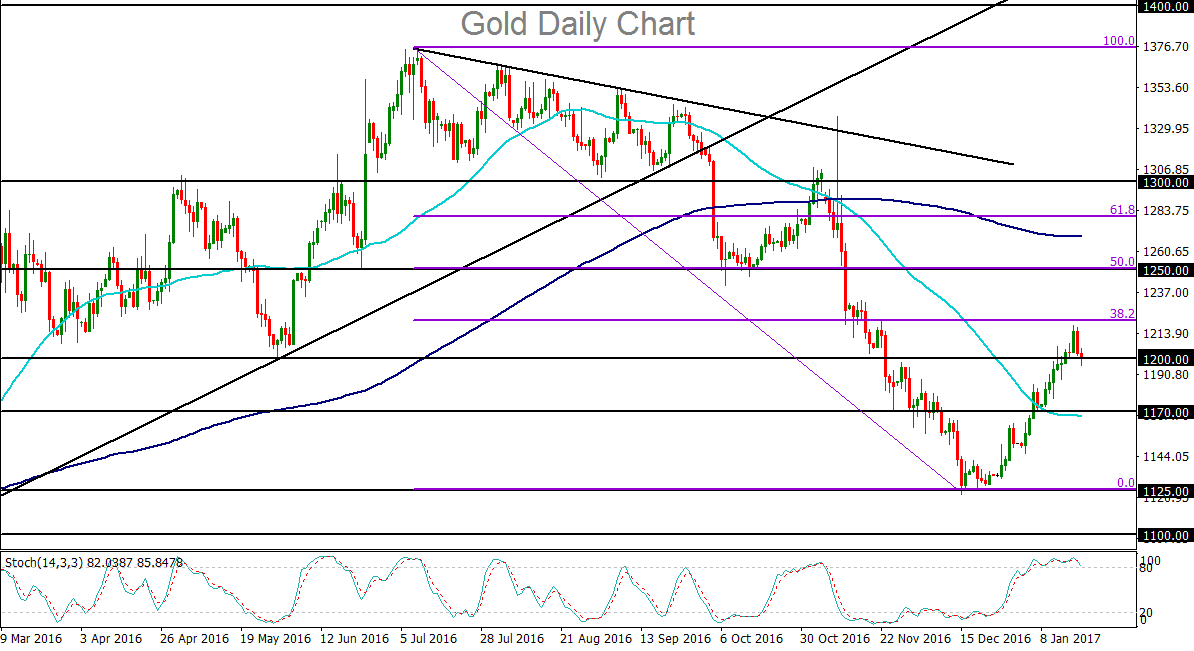