Home buyers were out in full force in September; DXY, EUR/USD

New Home Sales for September MoM were up 14%!

Did you buy a house in September?  Were you trying to buy your house before rates moved higher? Congratulations if you did! During the month of September, MBA 30-Year Mortgage Rates averaged roughly 3.0475, having moved slightly higher towards the end of the month after the September 22nd FOMC meeting.  As of October 20th, rates were nearly 18 basis points higher at 3.23.  Whatever the reason for the September buying, there were a lot of you!

The US Dollar Index (DXY) had been moving aggressively higher since putting in a low of 91.95 on September 3rd.  However, the index failed to break through a long-term trendline dating back to 2011 (red) near 94.55 on October 12th and pulled back.  The DXY has been trading in a range between 93.36 and 94.56 since September 29th.  There is a confluence of resistance above at the October 12th highs, the long-term upward sloping trendline, and horizontal resistance from the highs of September 2020.  These levels converge between 94.55 and 94.76.  Support is at the October 26th lows of 93.48, the 50-Day Moving Average at 93.34 and the 50% retracement from the September 3rd lows to the October 12th highs at 93.25. 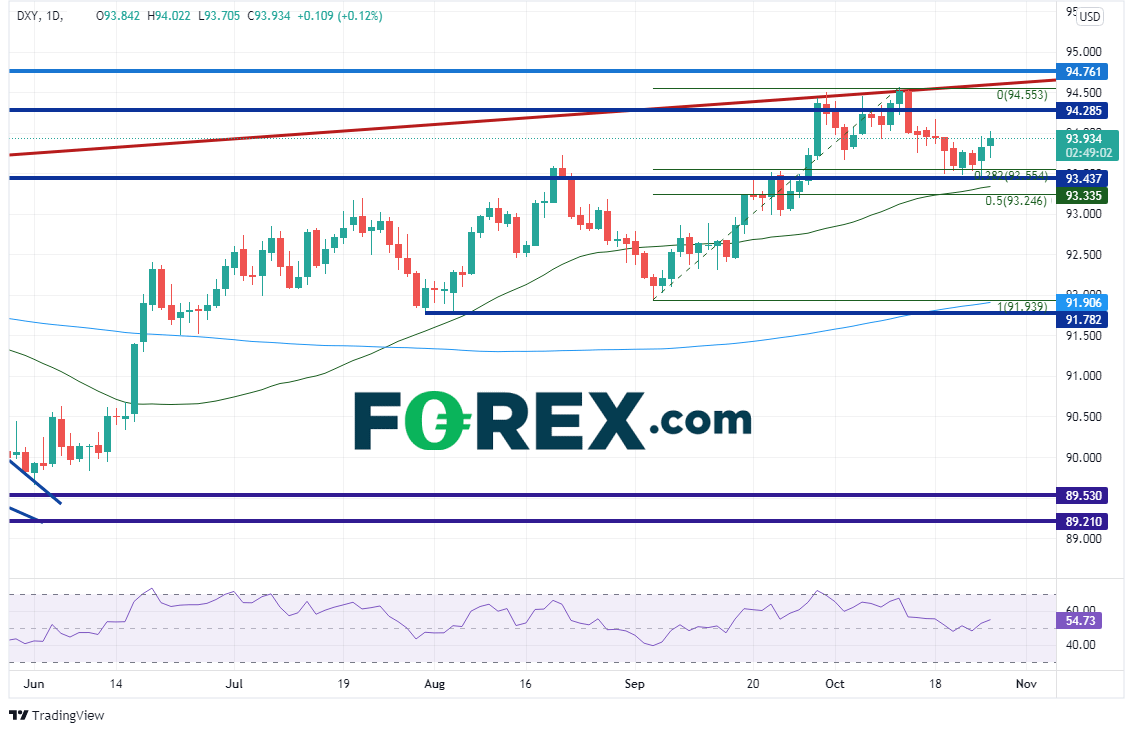 EUR/USD acts inversely to the DXY.  The pair had been moving lower from September 3rd when it tested previous highs at 1.1908.  On September 29th, EUR/USD broke through horizontal support at 1.1664, setting up a double top formation.  The target for a double top is the height of the pattern added to the breakdown point, which is near 1.1410.   However, price stalled on the downside after reaching the 161.8% Fibonacci retracement level from the August 20th lows to the September 3rd highs, near 1.1525.  EUR/USD has been range bound between 1.1525 and 1.1669 since September 29th (bouncing to the neckline of the double top). Strong resistance is between 1.1669 and 1.1684.  Just above is the 200-Day Moving Average at 1.1700.  Horizontal support is at 1.1572 and then a confluence of support between the previously mentioned 161.8% Fibonacci extension, horizontal support and the 50% retracement from the March 2020 lows to the January 6th highs.  These levels converge between 1.1490 and 1.1515. Home buyers were out in full force during the month of September buying both existing and new houses.  However, rates began moving higher towards the end of the month. Were these people rushing to buy ahead of rising rates?  We’ll find out when October’s numbers are released in a month!