How will German elections impact the DAX? Three scenarios to watch

Below, we explore the possible implications for the DAX under coalitions led by each of the three leading parties...

In the lead up to the hotly-contested election, we’ll share a series of articles analyzing how major markets may react under different scenarios. Last week we covered possible implications for the euro, and today we’ll delve into the potential impact on the DAX, Germany’s most-traded stock market index. 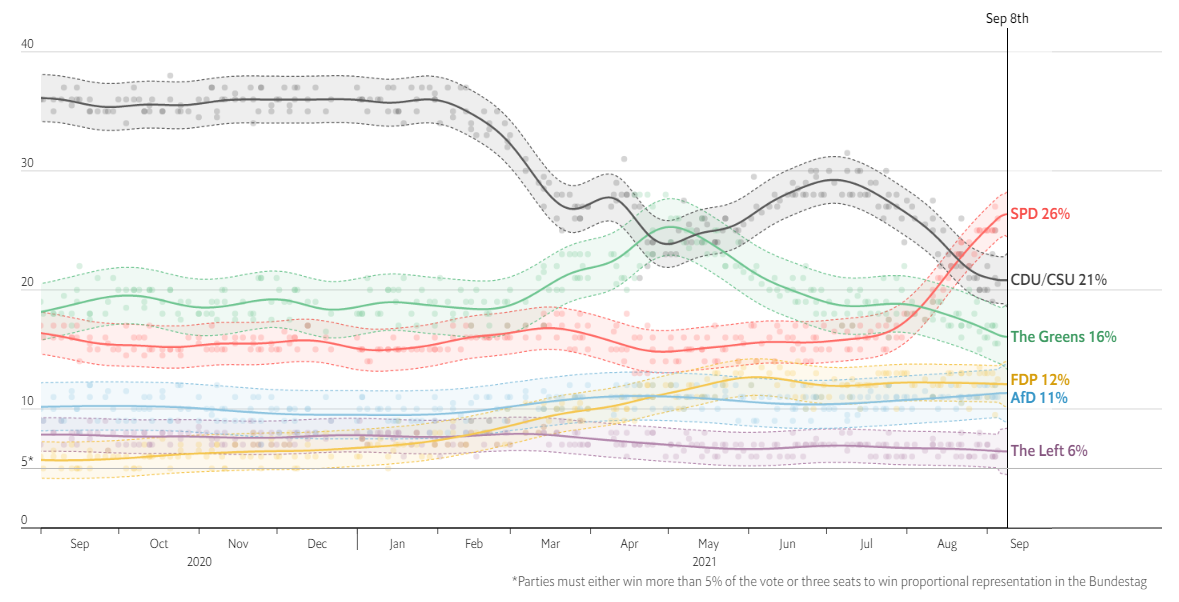 Below, we explore the possible implications for the DAX under coalitions led by each of these three parties, though of course the coalition partner(s) will also have a major impact on policies and the market’s reaction:

With a marginal, but growing lead in the polls as we go to press, a coalition led by the center-left SPD is among the most likely scenarios. As a more left-leaning party than the established CDU/CSU, an SPD-led coalition could be a relatively bearish development for the DAX, as the party has advocated for raising minimum wages, raising taxes, and supporting “labor” at the expense of “capital” at the margin. Of course, the likelihood of more liberal-leaning policies getting enacted will depend on the coalition partner(s) and their priorities.

Angela Merkel will be a tough act to follow, and that responsibility may well fall on Armin Laschet, the premier of North Rhine-Westphalia, Germany’s most populous state. With the CDU/CSU and SPD seemingly at odds after eight years of a coalition, a CDU/CSU victory later this month would likely result in a new coalition and a conservative shift in policy. All else equal, this may be a bullish outcome for the companies that make up the DAX, with a lower likelihood of higher taxes, additional regulations, and labor reforms.

It’s said that markets absolutely hate uncertainty, and a victory by the left-leaning Green party, led by Annalena Baerbock, would certainly introduce a heavy dose of uncertainty into Germany’s politics. The party advocates for an ambitious climate-change policy, widespread public investment, and deeper European integration, all of which could increase costs for German businesses. Therefore, a Green-led coalition could well be the most bearish election result for the DAX, and one that should have bullish traders keeping a close eye on the polls in the coming weeks.

While the above outlines three different high-level scenarios to watch, along with the potential implications for the DAX, there are countless permutations of coalitions that traders will have to sift through in the wake of the election.