If Rates Have Peaked Then The Dollar May Have Too

Just yesterday we warned that the USD could face headwinds as we approach April, and that certainly seems to be more the case now. Only there is a real risk USD could remain under pressure for much longer, if bond markets are anything to go by.

With the Fed’s target rate stuck at 2.5%, it’s worth noting that the 2-year treasury yield has fallen to just 2.4%, the 10-year is now 2.52% and both point lower. This is significant, as yields have shown a strong tendency to lead a shift in Fed policy. And, with potential for an inverted yield curve, we should seriously consider the potential for the Fed to cut rates further out. Remember, markets are forward looking, and they’re pricing in an increased probability for the Fed cut rates this year. Ultimately this could likely be bearish for USD whilst  traders remain defiantly long.

A Fed pause could be positive for stocks over the near-term (with potential for US markets to break to new high) and negative for bond yields (as money flows back into bonds). However, if the Fed do begin to cut this could be negative for stocks as it assumes the economy has derailed and earnings 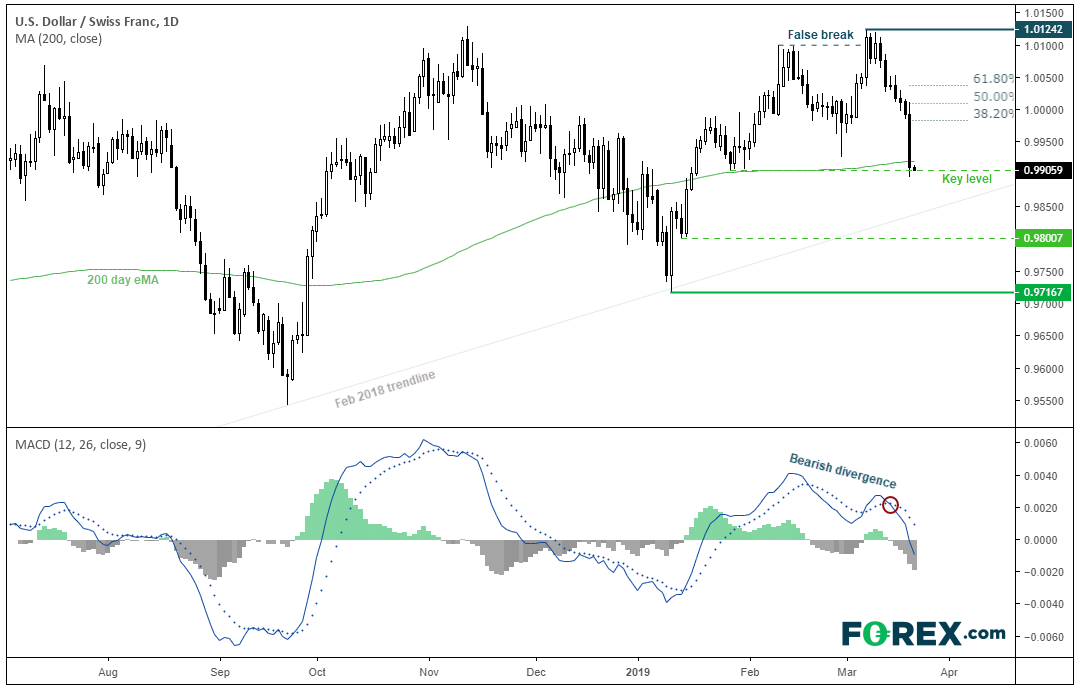 Going back to the US dollar, USD/CHF remains of interest around a bearish greenback theme. The Swissy has just endured its most bearish session this year, and now teeters on the edge of 0.9900 support. A clear break of this level brings the 0.9800 and 0.9718 lows into focus, although we’re hesitant to jump onto an extended move over the near-term.

USD/CHF has stalled near a structural low, is near its lower Keltner band and resides near the 200-day eMA.  And as we’re heading into the weekend, its plausible to expect profit taking, after 7 consecutive bearish days. Therefore, caution is warranted around current levels as to avoid entering an over-extended move. If prices are to rebound, we can use a Fibonacci retracement to seek areas of weakness (as there are no clear structural levels to play with above).

But further out, we see its potential to head for the 0.9716 lows and beyond given the shift sentiment post-Fed, and the broader technical landscape. A false break above February’s high was coupled with a bearish divergence on the MACD. Moreover, a MACD sell-signal occurred on the 14th March, the histogram points firmly lower (showing the averages are expanding with bearish momentum) and we’ve also on track for a weekly sell-signal on the MACD.