Is EUR/GBP about to drop?

Market participants looking for fireworks were left disappointed when the UK government officially started the process of leaving the EU on Wednesday. The pound has weakened a tad against the US dollar, but strengthened versus the euro and is holding its own relatively well against the yen.

Market participants looking for fireworks were left disappointed when the UK government officially started the process of leaving the EU on Wednesday. The pound has weakened a tad against the US dollar, but strengthened versus the euro and is holding its own relatively well against the yen. Meanwhile the FTSE 100 finds itself about 75 points shy of its March 17th record high level – hardly a disaster. To be fair, the UK stock index didn’t exactly fall off a cliff on the back of the Brexit vote back in June last year, as it was supported among other things by a corresponding slump in the pound and extremely accommodative monetary policy . So, even if negotiations between the UK and EU were to start going bad then it remains to be seen if the response from the FTSE will be any different this time, but it may haunt the pound. But now the focus is slowly turning away from Brexit to a potential Frexit with upcoming French elections in April. In the event that support for Marine Le Pen – the leader of the far right-wing National Front party – increases, so too will anxiety among market participants, and serious question marks will be raised about the future of the whole EU project. Given this uncertainty, the euro could come under pressure in the coming weeks and months. Consequently, the EUR/GBP may start to ease as speculators potentially reduce their record net short positions in GBP and increase their bearish bets on EUR. However the long-term outlook on GBP remains uncertain, so we are only expecting – at this stage – a moderate GBP recovery relative to EUR.

But from a technical perspective, the EUR/GBP may be in the process of forming a complex Head and Shoulders reversal formation, potentially pointing to a significant change in the tide. The cross has now failed twice to break the key resistance zone above the 0.8780 area, the second attempt resulting in a lower high. So it could be forming the right shoulder here. But the cross still remains well above the neckline and key support area of 0.8300-8340 and also above the still-rising 200-day moving average (0.8585/90), which objectively tells us that the long-term trend is still bullish. However will it now head decisively lower? To have any chance of doing that, it will first need to break below short-term support levels at 0.8590 and 0.8490, levels which were formerly resistance. 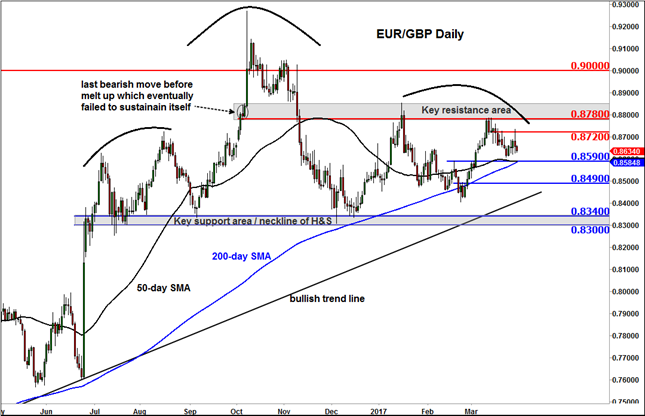