Is the world still crypto-crazy?

Bitcoin has recently pulled back nearly 75% from its all-time highs, and is threatening to move lower once again.

According to Investopedia, a cryptocurrency is “a digital or virtual currency that is secured by cryptography, which makes it nearly impossible to counterfeit or double-spend.”  It is also decentralized, which means governments and central authorities (i.e. central banks) can’t control them.  Although the original intent may have been to “outsmart” the government or possibly even to use them for criminal activities, the role of cryptocurrencies has turned into one of speculation.  Some of the more popular cryptocurrencies are Bitcoin, Ethereum, Litecoin and Ripple. 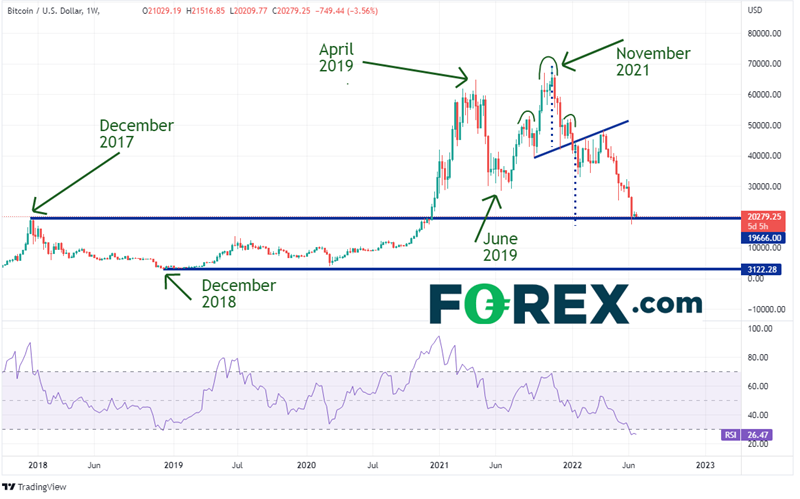 From there, price went on to form a long-term Head and Shoulders pattern.  Bitcoin began its 3rd move to all-time highs in November 2021 at 69,000 before pulling back to the neckline of the pattern. Note that this was around the same time that the NASDAQ 100 made all-time highs.  As interest rate expectations rose, stocks and cryptos began to sell off.  However, the selloff in cryptos was much more aggressive. During the first week of January 2022, BTC had broken through the neckline of the pattern.  The target for a head and shoulders pattern is the height from the head to the neckline, added to the breakdown of the neckline.  In this case the target was near 17,350.  After bouncing to retest the bottom-side of the neckline, price could only get as high as 48,234 before the bottom fell out.  BTC came within a few hundred dollars of reaching the head and shoulders target on June 18th, reaching a low of 17,592.78. 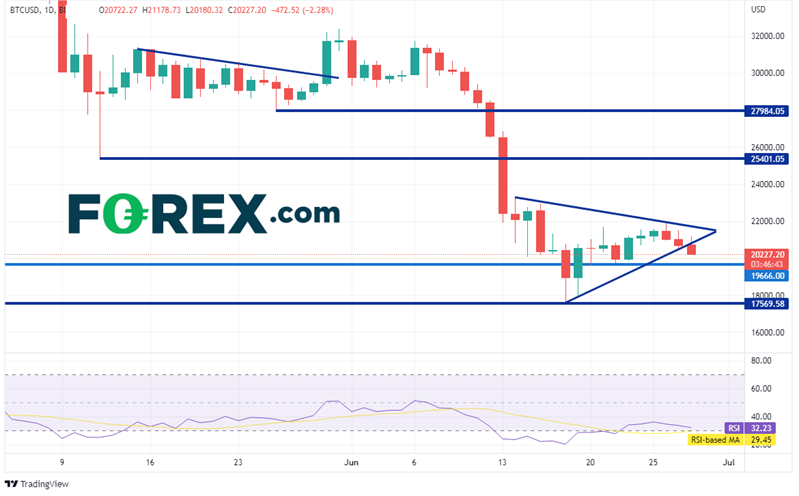 Cryptocurrencies have been moving lower, in general, since November 2021.  However, the most famous of them all, Bitcoin, has recently pulled back nearly 75% from its all-time highs, and is threatening to move lower once again.  Does that mean the cypto-craziness is on the verge of collapsing?  It appears we might find out sooner rather than later!