Is this the dollar’s comeback?

<p>The dollar has been pounded in recent days as expectations about a July Fed rate hike receded. Today however the greenback found good support against certain currencies, especially the euro which fell across the board. Despite the delay in the potential rate rise, the Fed remains the only major central bank looking to tighten its policy. In contrast, most other central banks are still very much dovish, including the ECB, BOJ and BoE. For this reason, we remain fundamentally bullish on the US dollar. However it could still be a long time before we see a significant appreciation in the currency.</p>

The dollar has been pounded in recent days as expectations about a July Fed rate hike receded. Today however the greenback found good support against certain currencies, especially the euro which fell across the board. Despite the delay in the potential rate rise, the Fed remains the only major central bank looking to tighten its policy. In contrast, most other central banks are still very much dovish, including the ECB, BOJ and BoE. For this reason, we remain fundamentally bullish on the US dollar. However it could still be a long time before we see a significant appreciation in the currency.

But the rally could occur at any time and we need to be alert to that possibility. In fact, the Dollar Index is in the process of forming a bullish engulfing candle on its daily chart today. This technical pattern suggests that the previous selling pressure has ended and the buyers have stepped back in. It is interesting that this rebound has occurred at around the 61.8% Fibonacci retracement level against the most recent rally off the support trend of the bear channel. When long-term trends change, a retracement to the 61.8% Fibonacci level is often seen before price stages another impulsive move. The first impulsive move occurred in early May when price formed a reversal looking pattern (false break) below prior support at 92.65, leading to a sharp rally. As the Dollar Index has not breached this level yet, that potential reversal pattern remains valid and so today’s bullish engulfing candle could signal the resumption point of the new upward trend.

All that being said however, the Dollar Index is still stuck inside a bearish channel and remains below all the main moving averages, as per the chart. So despite the potential reversal signs mentioned above, the trend is still clearly bearish. For that reason, bullish traders will need to proceed with extra care as the selling could resume at any moment. It is therefore important to pay close attention to key resistance levels such as the area shaded on the chart between 94.95 and 95.15 (if we even get there!). This is where prior support meets the top of the bearish channel. Only when the Dollar Index breaks through this region can we confirm the bullish reversal.

Conversely, if the buyers fail to show up in significant numbers soon and the DXY breaks below the 61.8% Fibonacci support at some stage then a deeper correction could be on the way. In this potential scenario, one will then need to watch the next Fibonacci retracement level down, namely 78.6%, at just below 92.80. Thereafter are the prior price reference points at 92.60/5 and 91.90/5. 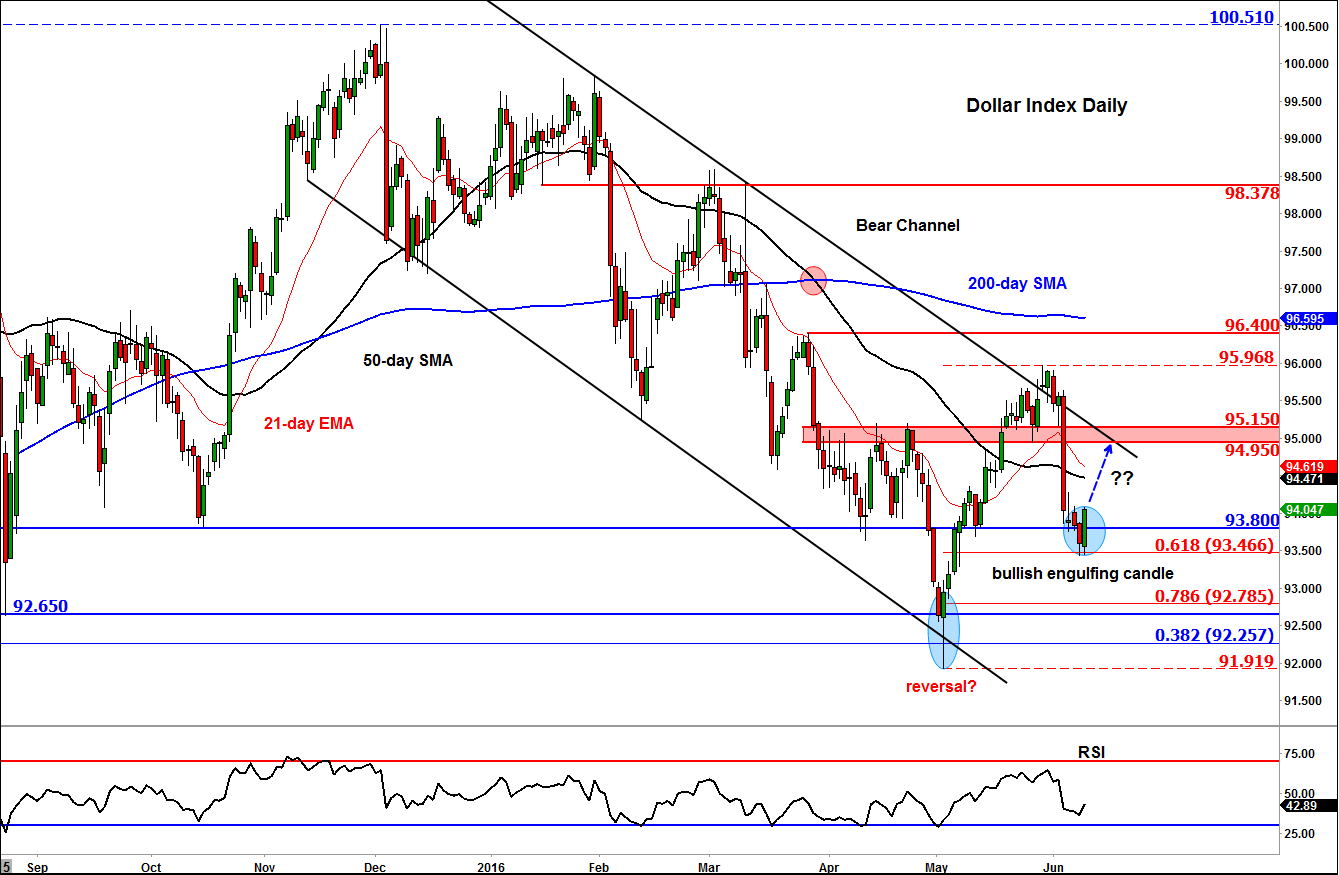