Is USD/CHF trying to tell us something about DXY?

If the 2 assets are truly, positively correlated, one may expect that the DXY will bounce soon

DXY and USD/CHF is known to have a positive correlation, and it’s usually a strong one.  As such, when traders don’t have access to the DXY, they sometimes trade USD/CHF as a proxy.  Except for a brief dip in late February, the correlation between the 2 assets has been above +0.90 for most of 2021.  The current correlation coefficient is +0.93.  A correlation coefficient of +1.00 means that the two assets are perfectly correlated and move together on a 1-for-1 basis.  A reading of +0.93 is pretty close!   USD/CHF hit a key inflection point today at 0.9200 and bounced.  This level has acted as both support and resistance many times.  Does this mean that the DXY is ready for a bounce as well? What is the US Dollar Index?

The price action in the DXY has been similar to that of USD/CHF.  DXY had been moving lower since March 2020 as well.  The US Dollar Index began moving higher on February 25th (2 days after USD/CHF bottomed) and stalled on its way toward a descending wedge target, putting in a high on March 31st (1 day prior to USD/CHF).  However, as DXY pulled back, it took out horizontal support AND the 38.2% Fibonacci retracement from the February lows to the March 31st highs (whereas USD/CHF did not).  Support is now at the 50% Fibonacci retracement level from the same timeframe near 91.57, and then the March 18th lows and horizontal resistance near 91.30.  Horizontal resistance is at yesterday’s high and the 200 Day Moving Average near 92.26. 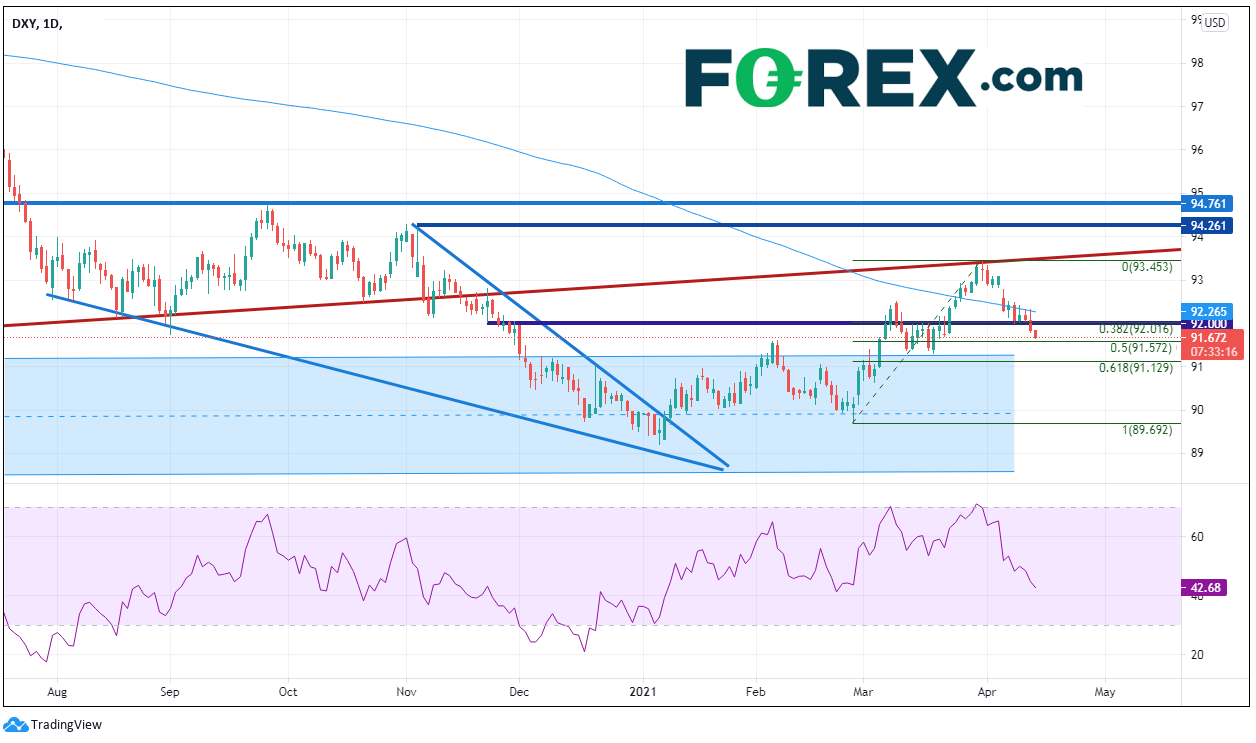 The DXY has moved lower relative to USD/CHF since April 1st and is approaching support at the previously mentioned 50% retracement level.  USD/CHF tested support today and bounced.  If the 2 assets are truly, positively correlated, one may expect that the DXY will bounce soon as well.