NZD/USD does not seems to be benefiting from New Zealand's planned lockdown lift and upbeat CPI data...

Share:
Yesterday (April 20), the New Zealand dollar outperformed other major currencies against the greenback, gaining 0.2% compared with the prior session. New Zealand Prime Minister Jacinda Ardern said the coronavirus alert level 4 lockdown in the country will end in a week, where key sectors will resume operations. Meanwhile, a day before, government data showed that New Zealand consumer inflation grew 2.5% on year in the first quarter, the strongest since 2011 and higher than 2.1% growth expected.

However, NZD/USD, widely considered as a commodity pairing, performance does not seem to be convincing so far this week, as the recent slump in oil prices has dampened sentiment in commodity-linked currencies.

From a technical point of view, the longer term outlook for NZD/USD remains skewed to the downside as shown on the daily chart. The pair is trading with in a bearish rising wedge pattern, while the upside potential is also likely to be limited by a declining trend line drawn from December last year. Below the nearest resistance at 0.6260, and a downside break out from the wedge would suggest that potentially it is heading downward to the first and second support at 0.5840 and 0.5690 respectively. In an alternative scenario, a break above 0.6260 might open a path to the month-high in March at 0.6450 on the upside. 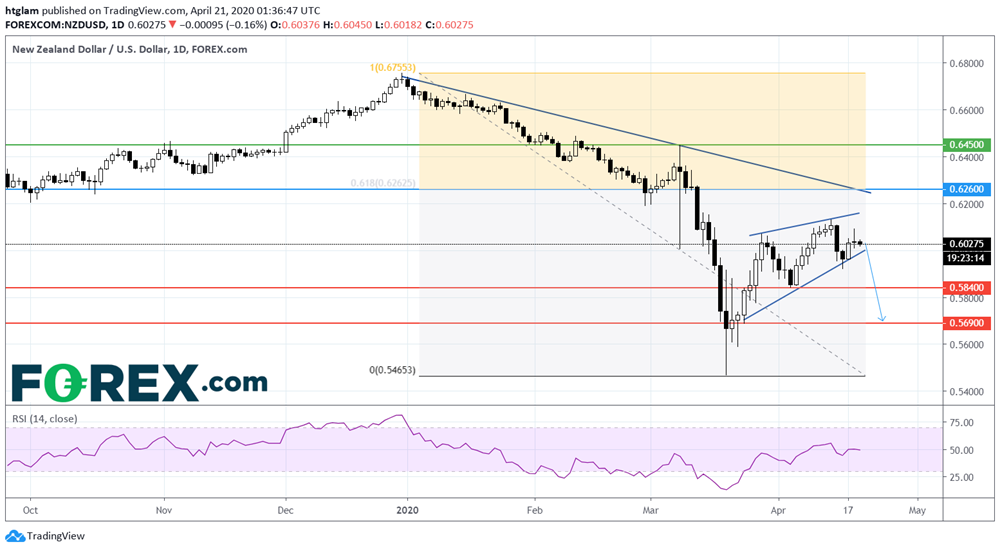