Both Lyft and Uber are aiming to turn profitable this year, but which stock will get there first? We outline what to expect from the pair’s first-quarter results and look at how Lyft and Uber shares could react.

When does Lyft report Q1 results?

Lyft will be the first to report first-quarter results on Tuesday May 4.

Lyft earnings consensus: what to expect

It has been a tough year for ride-hailing stocks. The pandemic severely limited travel and kept people at home, causing Lyft’s annual revenue to plunge 35% year-on-year and its losses to widen. However, Lyft has been experiencing a steady recovery since the third quarter of 2020 and that continued into the fourth.

Recent reports from other companies that suffered during the pandemic, ranging from McDonalds to Mastercard, suggest things have improved markedly during the first quarter thanks to the government’s stimulus cheques and the progress being made with the US vaccination programme allowing restrictions to be eased, which should bode well for Lyft.

Lyft has said it is ‘positioned for strong organic growth and margin expansion as the recovery takes hold’. Investors will want to see evidence that the recovery is continuing. Understandably, revenue will be significantly lower year-on-year in the first quarter due to strong pre-pandemic comparables.

Smaller losses will be welcomed by shareholders, who are eagerly waiting for Lyft to get back on its feet and turn a profit.

Lyft recently revealed it is selling its self-driving car unit for $550 million, of which $200 million is being paid upfront with the rest due over the next five years, to a subsidiary of Toyota. The deal is significant. Although the division holds huge potential in the future it currently only burns through cash – around $100 million of R&D spend a year – and offloading the business generates cash for the Lyft and cuts costs.

This will accelerate Lyft’s path to profitability and the company is expecting to report a profit at the adjusted Ebitda level in the third quarter of this year, when the deal should be completed. It will also leave Lyft more focused on its core business of transportation-as-a-service.

Lyft trades within a descending channel dating back to mid-March. After rebounding off the upper band of the channel the price slumped through its 20SMA and 50 SMA on the daily chart. The RSI is indicative of further downside whilst it remains out of oversold territory.

On the flip side a move above $60 could see the buyers gain traction. A breakout above 64 the upper band of the channel and horizontal support is needed to negate the current bearish trend. 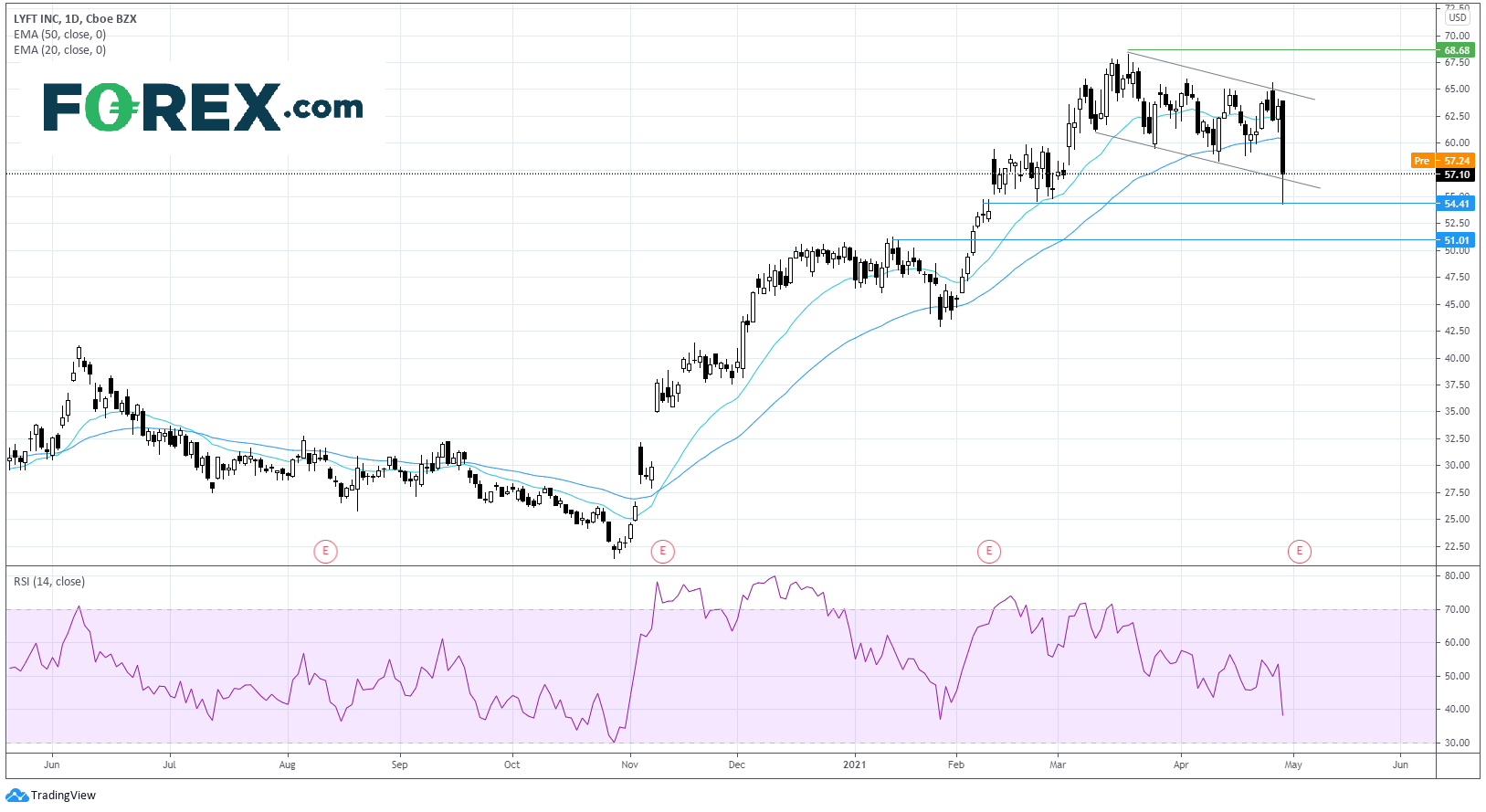 When does Uber report Q1 results?

Uber will release first-quarter results the day after Lyft on Wednesday May 5.

Uber earnings consensus: what to expect

Uber has also signalled it has seen a significant improvement since the start of 2020, having already revealed that gross bookings reached its highest-ever monthly total in March in its 12-year history.

Notably, Uber is a very different beast to Lyft. The company has been able to offset any weakness in ride-hailing with strength in deliveries of food, which has skyrocketed during the pandemic. In fact, gross bookings for deliveries were up 150% year-on-year in March. Still, the ride-hailing division also saw bookings increase 9% in March compared to February, implying that the recovery in travel has remained on track during the first quarter.

A potential barrier to capitalising on the recovery is the shortage of drivers, with demand currently outstripping supply in the US. Although Uber is acting to remedy this by improving incentives to attract more drivers, this will also increase costs.

Analysts are expecting revenue to rise 3.4% quarter-on-quarter and for losses to remain broadly level, although much narrower than the year before.

Another problem that Uber has encountered that Lyft has escaped is the UK ruling that means Uber drivers are now classed as workers, which will hurt revenue and lead to significant one-off charges being booked in the first quarter. Still, it is worth noting that the UK only accounts for 6% of global ride-hailing bookings.

Despite signs that higher costs and charges could weigh on results in the near-term, Uber has said it still aiming to become profitable at the adjusted Ebitda level sometime in 2021, although it has not provided a specific timeframe so this is an area to watch out for when it releases its results.

The Uber share price has been trading within a symmetrical triangle pattern, with a break out or a break down potentially coming.

Whilst the share price briefly broke down through the ascending support, it closed above it and is looking at further gains pre-market.

Seller should wait for a confirmed move below $54.70 the ascending support for a deeper selloff towards $51.00 the February low.

Meanwhile, buyers will look for a breakout above the descending resistance at $60.86 for as move higher towards $64. 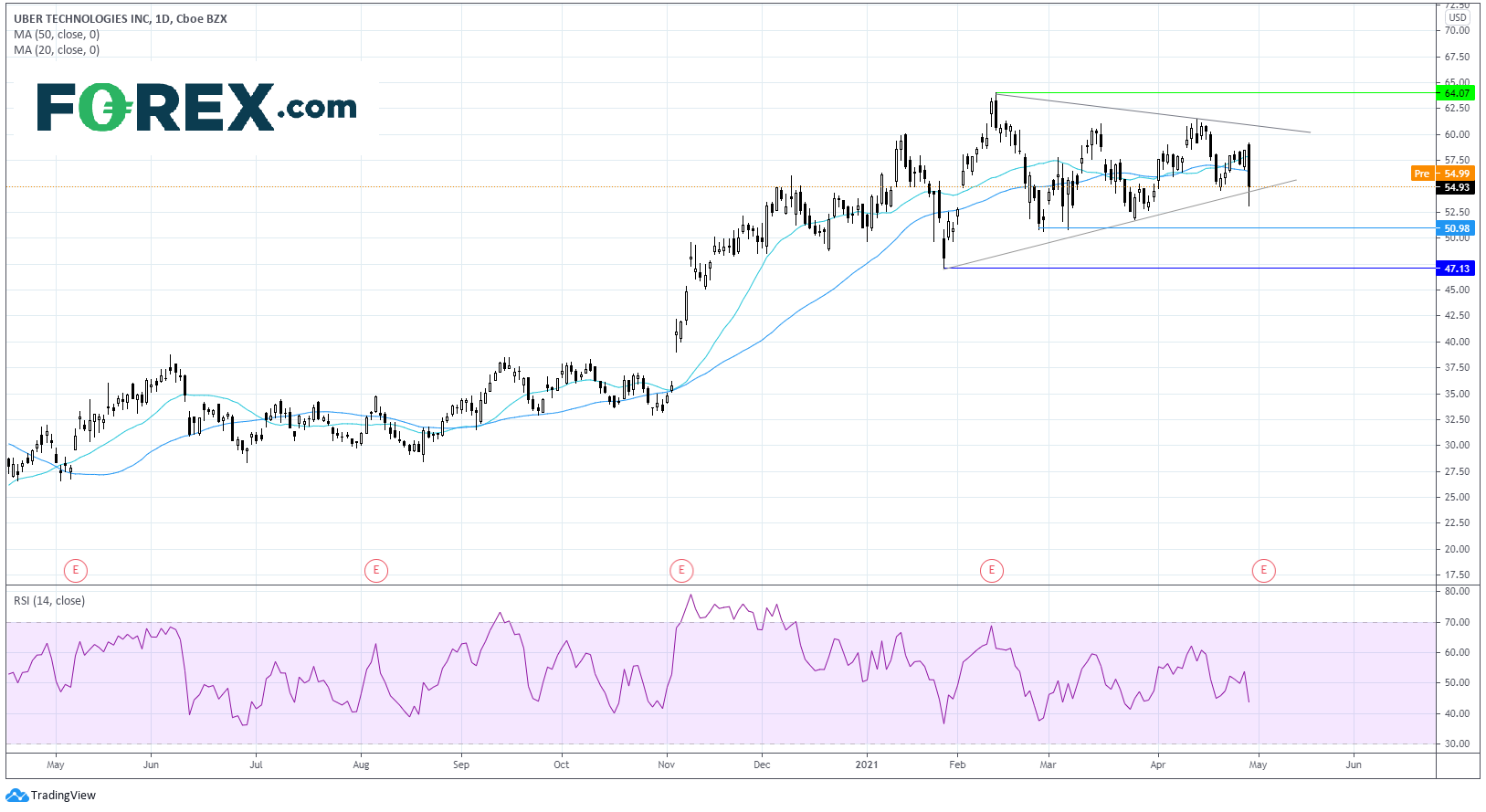 How to trade Lyft and Uber shares

You can trade Lyft and Uber shares with Forex.com. Follow these easy steps to start trading today: