Major indices stacked up their 3rd straight bullish year – Can they make it a 4th in 2022?

*This article is part of our 2022 Global Market Outlook collection, where we highlight the key themes, trends, and levels to watch on our most traded products. We’ll be publishing these reports to our pages from December 13-20, so please visit the official 2022 Outlook hub page to see the whole collection!

As of writing in mid-December, index investors have little to complain about; after all, major indices from the US to Germany to Australia are putting the finishing touches on their third consecutive bullish year (Australia’s benchmark ASX 200 technically fell -1% in 2020, but the total return was positive after accounting for dividends).

Following a strong 2019 across the board, global fiscal and monetary policymakers aggressively flooded the financial system with liquidity in 2020 to mitigate the impact of the COVID pandemic, and indices continued to ride high on the back of that stimulus in 2021 despite the lingering pandemic. Now every trader is asking the same question: Will indices be able to extend their winning streaks to four years in 2022?

What does the historical data show?

With any market-related question, it’s essential to understand historical base rates before making a specific forecast. In other words, how often have major indices risen for four straight years historically?

Focusing in on the three major US indices and Germany’s DAX, here’s what we found over the last 50 years (since 1971, excluding dividends):

To summarize, even after rising for three straight years, major indices have usually (70% of the time) tacked on another gain in year four.

What factors will drive equity indices in 2022?

Notably, we may already be past “peak stimulus” globally. Across the major developed economies, fiscal policymakers are rapidly looking to rein in deficits to improve their balance sheets and mitigate inflation fears. Meanwhile, most major central banks are similarly looking to “normalize” monetary policy after cutting interest rates to 0% (or below in some cases!) and instituting massive asset purchase programs in recent years. At the margin, government spending and interest rates will likely provide less of a tailwind for global indices in 2022 as compared to 2021 or 2020.

Despite the potential for interest rates to edge higher, equities should still benefit from the TINA (“There Is No Alternative”) trade in 2022. Especially with inflation at multi-decade highs, the appeal of holding safe assets like cash and bonds is as low as ever; from massive financial institutions to individual mom-and-pop investors, everyone is feeling pressure to invest in stocks in order to maintain their purchasing power. This dynamic, and the attendant low discount/hurdle rate for making new investments, should support global indices in the coming year.

Finally, we would be remiss not to mention the (microscopic) elephant in the room, COVID. While many rich countries have gotten back to a semblance of normalcy through vaccines and mitigation measures, the pandemic remains stubbornly entrenched across the globe. As we’ve seen, new variants can emerge and propagate at lightning speed, so readers should be wary of the risk that a new strain of the disease could lead to travel and economic restrictions, as well as exacerbate the ongoing disruptions in global supply chains.

Below, we highlight the relevant trends and levels to watch on five of our most-traded indices:

See our guide to trading the Dow!

Established in 1896, the proverbial “granddaddy” of modern indices is still among the most followed bourses on the planet. As of writing, the Dow is pulling back from the 161.8% Fibonacci extension of the COVID collapse near 36,600, but the index nonetheless remains in its post-COVID uptrend for now.

Looking ahead, the key level to watch will be around 33,700, which marks the convergence of previous support from the last three quarters of 2021 and the rising 50-week EMA. A break below that level early in 2022 would be cause for concern for bulls, whereas a move above 36,600 would confirm the uptrend and have bulls targeting 40,000 next: 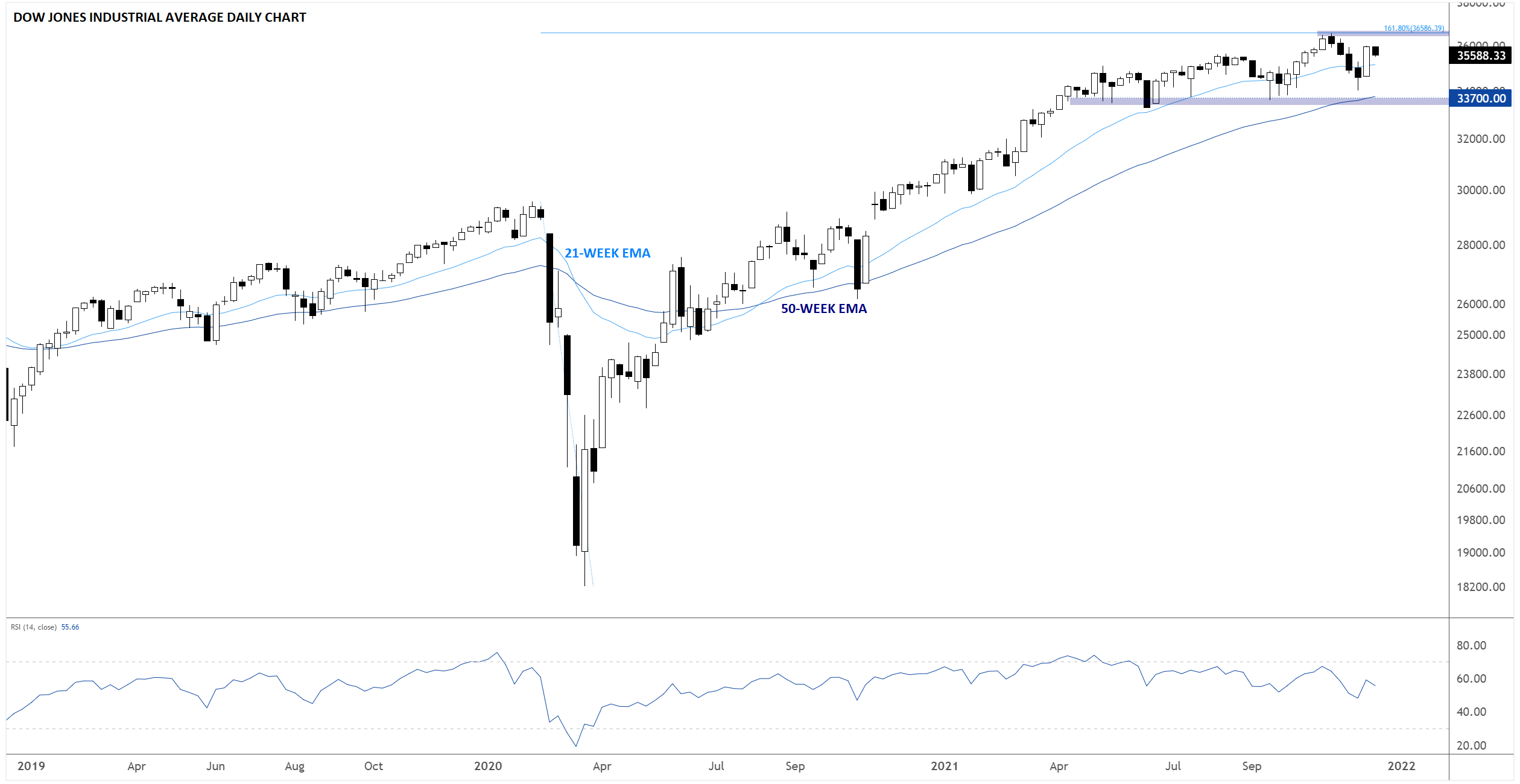 As we flip our calendars to 2022, the broader S&P 500 index remains in an even more well-defined bullish trend than the Dow. The index has formed a clear rising channel over the last 18 months, with support coming in around 4500, the confluence of the bottom of the channel and its 21-week EMA.

A break below that level, if seen, would weaken the near-term bullish bias, though support could still emerge near the previous lows at 4275 and keep the longer-term uptrend intact. Meanwhile, a clear rally through 4740 resistance could bring the psychologically-significant 5,000 level into play sooner rather than later:

See our guide to trading the Nasdaq 100!

The chart of the tech-heavy Nasdaq 100 index looks similar to the S&P 500, with prices rising in a well-defined bullish channel and traders consistently buying dips toward the 21-week EMA over the last 18 months. In this case, the key support level to watch at the start of the year will be around 15,400, with a potential move below that area exposing 14,500 next; only a confirmed break of 14,500 would call the longer-term uptrend into question. To the topside, bulls will be gunning for 18,000+ if the 2021 high at 16,700 is eclipsed: 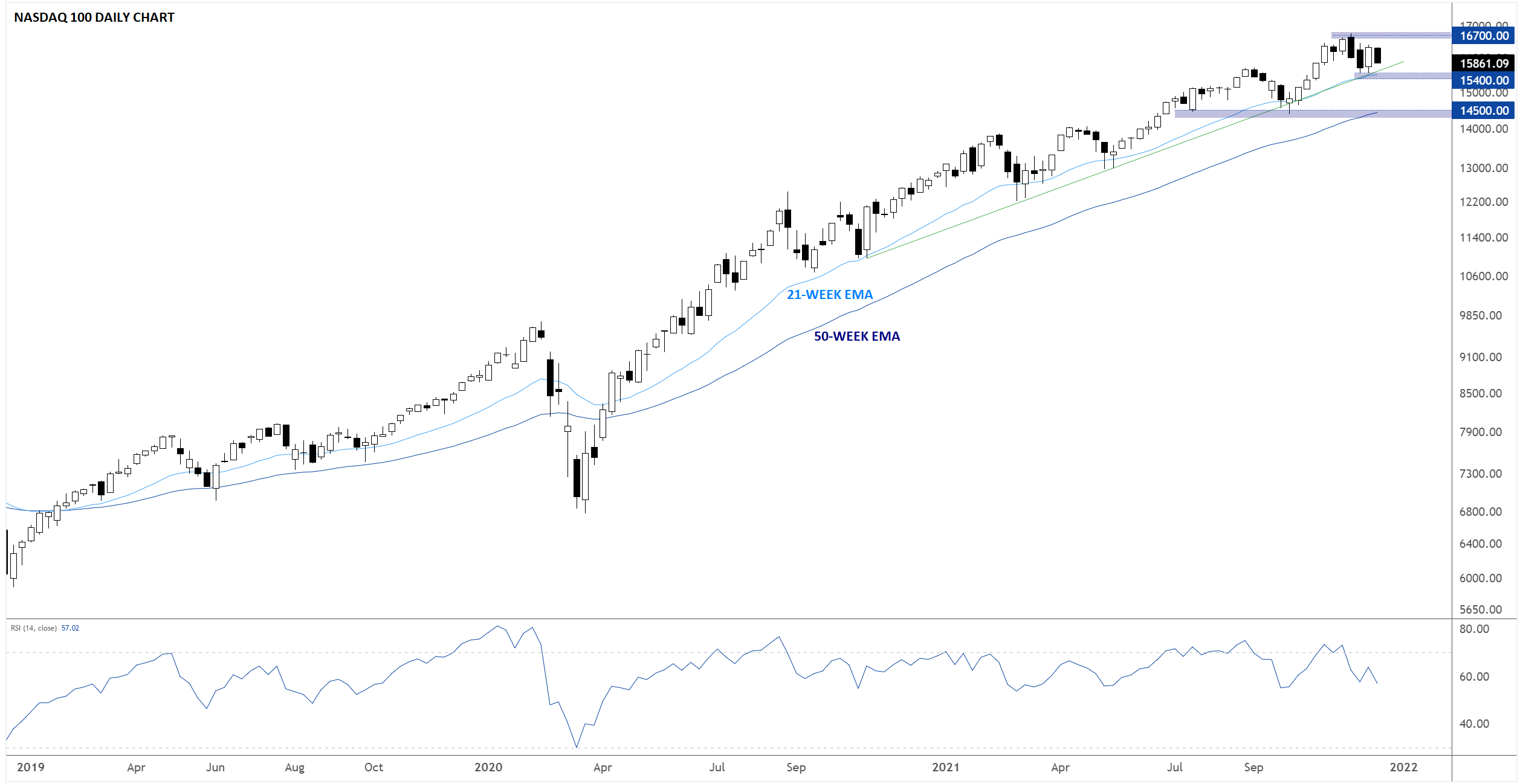 See our guide to trading the DAX!

Looking across the Atlantic, Germany’s widely-traded DAX index lagged its US brethren in 2021, with prices moving more sideways than trending over the last three quarters of the year. After trailing on the upside move, the DAX may be more vulnerable to a selloff if global stock indices stumble in 2022. To start the year, there is critical support in the 14,800 area, and if the German bourse breaks that, there will be little in the way of logical support until near 13,500, which marks resistance from H2 2020 and support from early 2021. Under a more bullish scenario, a confirmed move above 16,200 would open the door for continued gains to record territory above 17,000:

See our guide to trading the ASX 200!

Last, but not least, Australia’s ASX 200 also appeared to lose momentum in the latter half of the year. Indeed, the index peaked for the year back in early August and is trading near its lowest level in seven months as we go to press. The sideways range to watch is clear heading into 2022: Strong support sits just below current prices at roughly 7,100 while resistance looms up near 7,600. A move beyond this 7-month range could set the scene for a continuation in the same direction in the coming year: 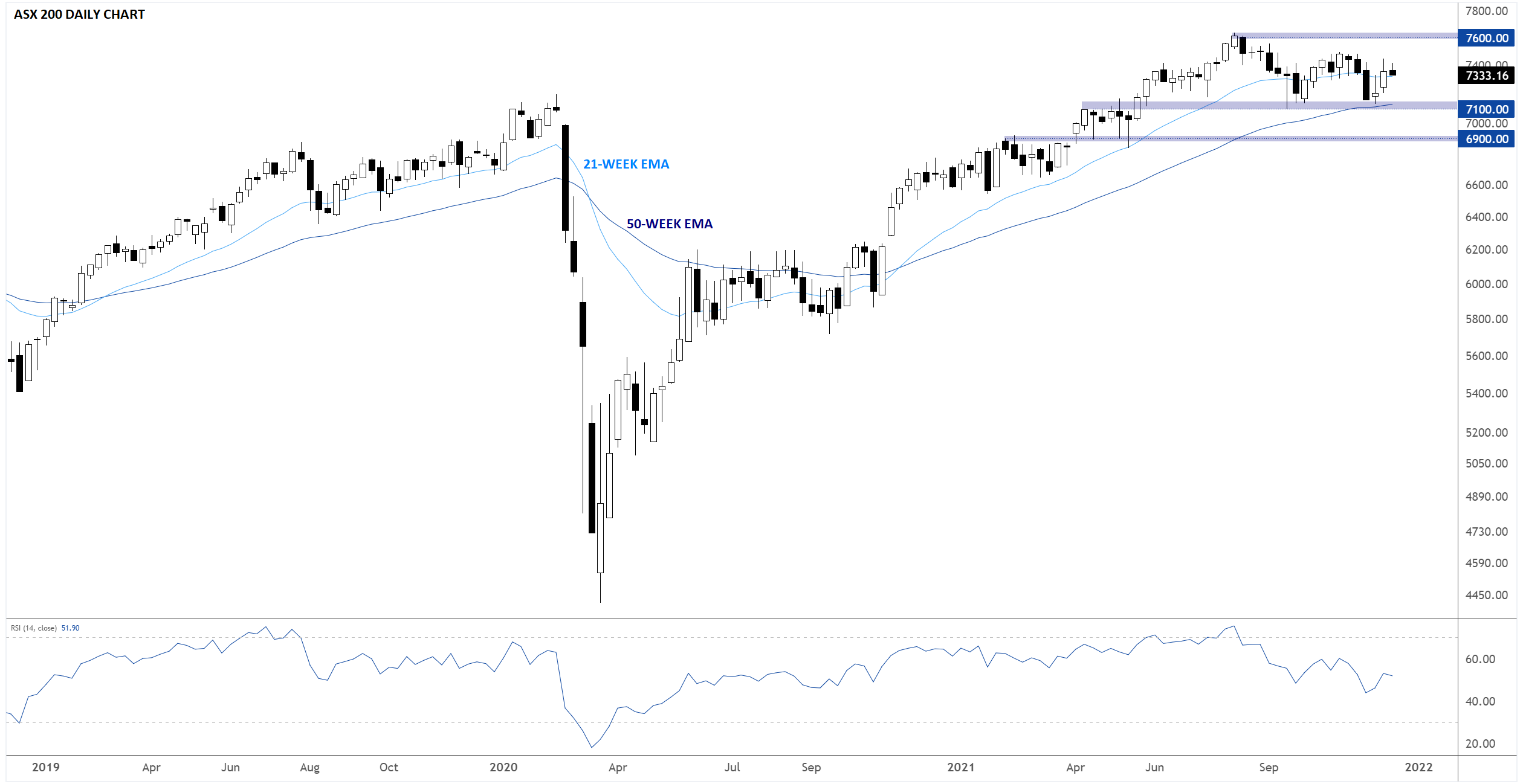