Talk of ‘green lights’, ‘tunnels’, and ‘constructive’ discussions has given UK-tied assets a shot in the arm. Now for the hard part.

From the markets’ point of view, the next challenge is to see the skin on the bones of the sketchy outline that’s emerged so far, on which so much optimism has been based. The pound’s upwards surge on Friday is now the biggest since 2009. This follows the “pathway” to a deal that emerged after what were widely seen as last-ditch talks between PMs Johnson and Varadkar on Thursday.

Indications from a specialised type of options trade called a risk reversal underscore the momentum of the swing in sentiment. According to Bloomberg data that, admittedly, only go back to 2003, gauges of this ‘risk-neutral’ strategy are showing the biggest bullish bias ever. 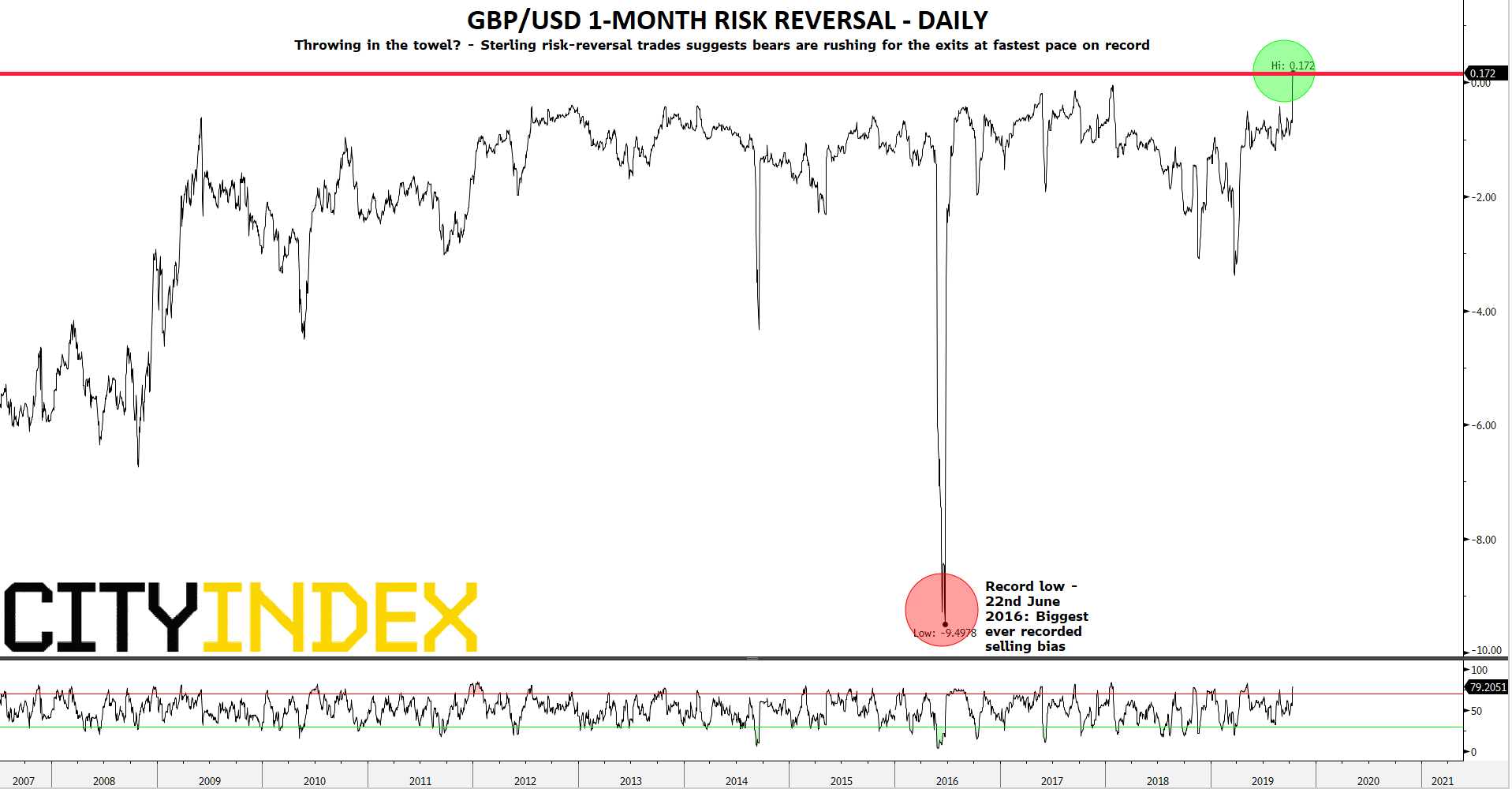 This type of strategy is mostly the domain of professional traders, including those employed by major financial institutions. Combined with what could be a record low in sterling risk-reversals in days leading up to the Brexit referendum, Friday’s moves suggest that the biggest and bearish market participants are showing signs of throwing in the towel. Also, some of the biggest enthusiasm ever for buying the pound seen since 2016. The current move has been building up for weeks but is hitting a peak on Friday. That’s in line with increasingly hopeful news flow. The other way of looking at today’s trades is as a humongous short squeeze. That could certainly help account for the size and intensity of some of the cross-asset surges on view.

But are these moves justified, given what we know for sure, which in reality is not much?

London and Brussels have now signalled that they’re approaching the possibility of detailed talks. The EU’s chief negotiator, Michel Barnier, whom no one believes is given to capricious decisions, has let it be known that he recommended that EU-UK talks should enter a procedure known as a ‘tunnel’.

Talks will thus intensify from here—continuing over the weekend—and Brussels is expected to ‘take stock’ on Monday.

This renewed enthusiasm for talks can really only mean that there’s something new to talk about; a new concession, and it must have come from Prime Minister Boris Johnson. Reports point to something linked to customs, what else? Whatever that something is obviously hasn’t been disclosed. Yet only a kind of ‘shadow backstop’ that can be defined by the UK as ‘not quite the backstop’ will really cut the mustard. Briefings by Downing Street today have suggested Britain may now be open to a simple majority endorsement of any deal by Northern Ireland, instead of the Irish veto Johnson initially proposed. That would also be cogent with a ‘backstop prequel’, along the lines of its initial form from February 2018. The EU noted on Friday that its position on the backstop hasn’t changed. Still, it’s worth noting that a ‘time-limited’ backstop has been rallying quite sharply this week, on both sides.

If Johnson’s new proposal turns out to be along the speculated lines, these may turn out to be fault lines.

At this stage, it remains touch and go whether Brexit-supporting Conservatives will support such a plan, having consistently rejected any notion of an Irish border. The former rebels have buttressed the PM from the worst effects of his loss of control over Parliament but may now become less reliable. How the rest of the House will take such plans is just as uncertain, as is the response from the small Northern Ireland unionist party that has played an outsize role in underpinning the Tories.

If any of these of threads unravels, the deal can unravel too, taking an almost unprecedented swing by sterling with it.

Any resumed downturn wouldn’t stop there either. The largest British shares that have the closest known ties to the UK have been rallying sharply, some in double digit percentage amounts, this session. RBS, Kingfisher, Barratt, Lloyds, Persimmon, Next, BT, ITV and several others – some EU-listed – are likely to return the day’s gains rapidly, at the first whiff of disappointment. In the worst case, the EU suggests that a let-down might cause it to abandon ‘tunnel’ talks. Even if nothing as drastic as that is seen, moderation of the tone of EU-UK commentary relative to the optimistic levels of recent days could chill sentiment too. Under current circumstance, signs that Brussels and London are moving to a short highly conditional extension could still be taken positively by investors.

Cable will need to do something very simple to demonstrate that buyers are crossing the line from ‘hopeful’ to ‘(more) convinced. At the time, the high on 25th June around $1.2784 looked like an innocuous attempt to extend a near two-week up move. The outcome was a not very surprising failure, but for various reasons the scale was large. The pound eventually bottomed at one of its deepest lows in two years. Hence a well-founded bull ought to be able to push aside $1.2784 fairly easily. Particularly in the context of the year’s $1.33 highs, when a ‘no-deal’ disaster was averted but with no end to Brexit in sight at the time. GBP/USD slicing through the trend line connecting highs back to the March peak was a good sign. The rate must now follow through in a few sessions or an inclination to fade will set in.