The markets’ initial reaction to the outcome of the German federal election has been negative. The German DAX futures and EUR/USD both gapped lower at the open overnight as Angela Merkel’s achievement of securing a fourth term at the helm of the German parliament was overshadowed by the stronger-than-expected showing from the right-wing AfD party.

The markets’ initial reaction to the outcome of the German federal election has been negative. The German DAX futures and EUR/USD both gapped lower at the open overnight as Angela Merkel’s achievement of securing a fourth term at the helm of the German parliament was overshadowed by the stronger-than-expected showing from the right-wing AfD party. However the DAX was able to regain its poise shortly after the open, thanks mainly to lower bund yields and a weaker EUR/USD exchange rate, which boosted the appeal of some German export names. The EUR/USD was unable to rise more than 1.1935/40 area overnight, so some of its weekend gap was left unfilled. Meanwhile Germany wasn’t the only place where elections were taking place. In New Zealand, too, the incumbent Bill English won the biggest slice of the vote, but like Merkel he still fell short of forming a majority government. A coalition-building process will now begin in New Zealand, which could take weeks.  Elsewhere, Japan’s Prime Minister Shinzo Abe has called a snap election to capitalise on the boost in support during the North Korea crisis and to the weak showing for the opposition. Japan’s parliament will dissolve on Thursday, with the vote to be held on either 22nd or 29th October. Mr Abe also announced a 2tn yen stimulus package on education, debt reduction and social spending. The news provided a bit of a boost for the Japanese yen.

EUR/JPY could be on the verge of a correction

As a result of Merkel’s disappointing showing (euro-negative) and the announcement of Japan’s snap elections (yen-positive), the EUR/JPY has turned sharply lower. In fact, the EUR/JPY could be on the verge of a correction here given its extended bullish run and the fact that price has turned lower from a key long-term resistance area around 134.15-40. This level marks the low from October 2014 before the rally to near 150 that ultimately failed to sustain itself. Once support, this level is now offering some resistance. What’s more, the monthly chart also shows that price has reached the long-term 61.8% Fibonacci retracement level. On the daily chart, the EUR/JPY has broken back below the rising trend line that had capped the previous upsurges. In the process, key short term support at 133.50 has also broken down. Going forward, this level may be the new resistance to watch. The next immediate support at 133.05/10 area was being tested at the time of this writing. Any further breakdown below this level could pave the way for a larger drop in the days to come, perhaps towards the next support zone in the 131.70-132.00 range. 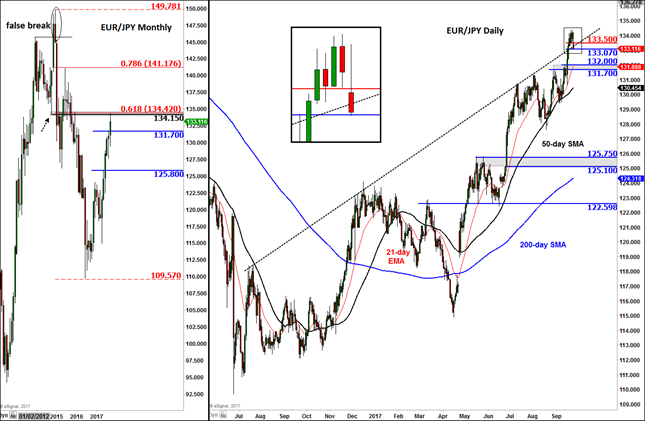