The Mexican currency has been inversely correlated with Trump's campaign performance in recent months due to Trump’s very public and hardline positions on trade and immigration with respect to Mexico. A potential Trump victory would widely be seen as a negative for Mexico, leading to substantial pressure on its currency. This Trump-driven pressure on the Mexican currency has already been clearly seen as peso-weakness prompted USD/MXN to reach an all-time high around 19.92 in late September. The peso rebounded from that low against the dollar immediately after the first 2016 presidential debate between Donald Trump and Hillary Clinton on September 26th, in which Clinton was widely considered to be the victor. The peso then continued to rebound and USD/MXN continued to fall as Clinton’s lead widened throughout October.

Last week, however, USD/MXN rebounded from a key uptrend support line extending back to late April, as the peso began to retreat once again. This was exacerbated by Friday’s news that the FBI was opening a new investigation into Clinton’s potentially damaging emails and private email server from her stint as Secretary of State, which helped boost Trump’s campaign. On Tuesday, the Mexican peso sharply extended its pullback as Trump continued to build some momentum, prompting a strong surge for USD/MXN.

Currently, USD/MXN has shot back up above a short-term uptrend line which had been broken down in mid-October. The Mexican peso, as well as the US dollar, remain laser-focused on how the Trump/Clinton drama plays out in the week remaining before the presidential election. Clinton presently still retains a lead in overall polling. But developments in the FBI investigation could change that in the days to come. If Clinton is able to salvage her lead, USD/MXN should once again head downward as the peso continues to recover from the fear of a Trump win. Alternatively, if the FBI’s investigation of Clinton proves too damaging to her campaign, USD/MXN could once again reach back up towards its noted 19.90-area all-time highs and above. 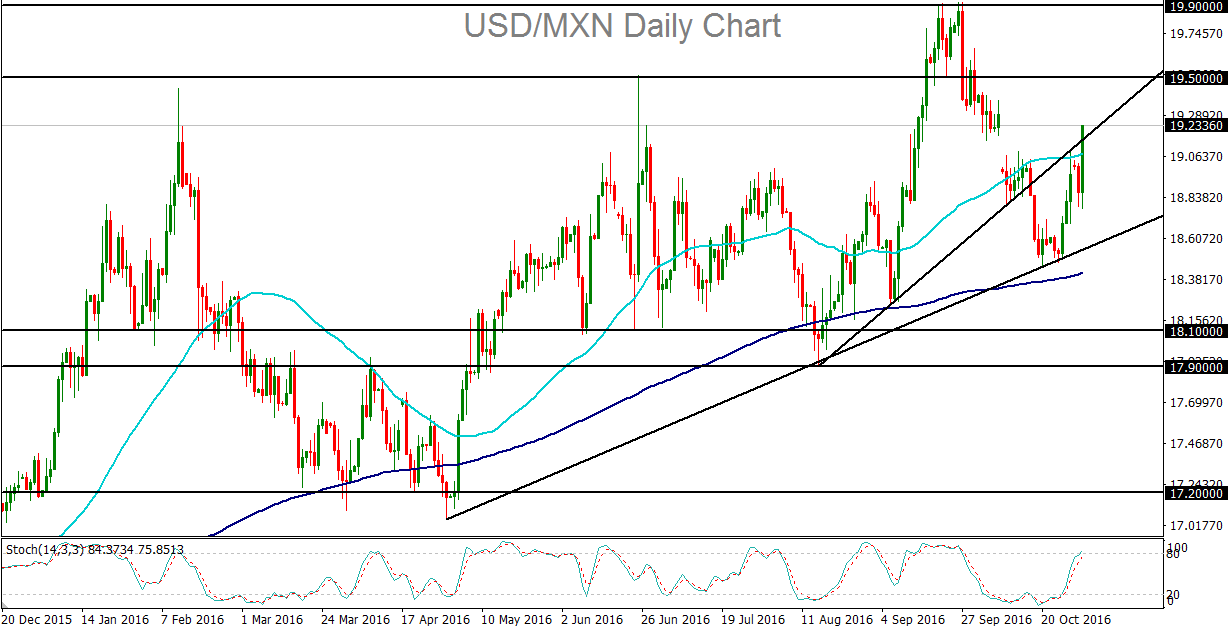