The YoY headline inflation number for mid-month October rose to 6.12% from 5.87% in September

At Mexico’s last central bank meeting on September 30th , Banxico hiked interest rates from 4.5% to 4.75% and said that the recent rise in inflation is transitory (like so many other central banks around the globe).  They also stated that they expect inflation to converge to their 1%-3% target within the horizon forecast.  Today, Mexico released its mid-month Inflation Rate for October. (Mexico is one of the few countries that releases a mid-month and a final inflation report.)  The YoY headline inflation number for mid-month October rose to 6.12% from 5.87% in September, moving above April’s high of 6.08% and reaching its highest level since 2017.  Early this year, the Bank if Mexico had said they has hoped inflation would be within target by the end of the year, however inflation continues to move further away from the 1%-3% area!  Banixco meets again on November 11th.

USD/MXN has been holding above a key support zone between 19.5481 and 19.7464 since December 2020.  Every time price had reached that zone, it bounced, putting in a lower high. On September 28th, USD/MXN finally broke out above the downward sloping trendline dating back to June 30th, 2020.  The pair traded just short of previous horizontal support (now resistance), and is now at a large confluence of support between 20.2217 and 20.1000, which includes: 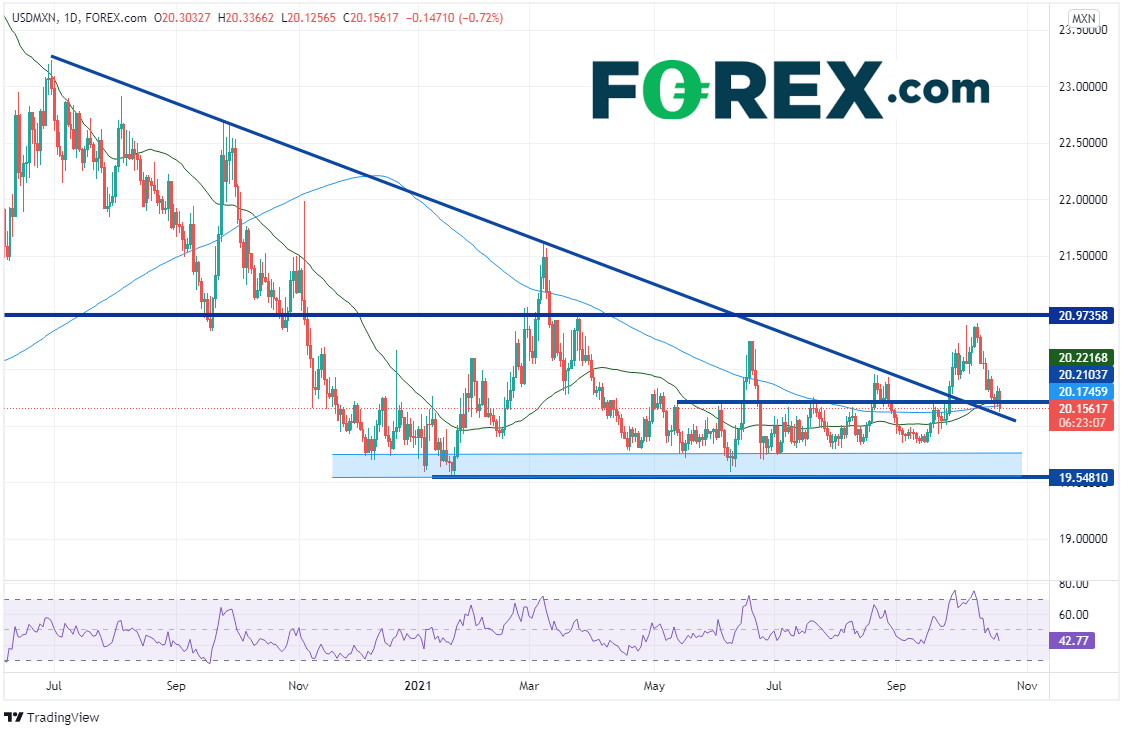 Although Mexico’s central bank continues to raise interest rates, inflation continues to rise as well.   Banixco continues to see the inflation as transitory and feels it will fall to their forecasted target range of 1%-3%.  The question is, “How much higher will the central bank need to raise rates before inflation begins to level off?”.  Banixco doesn’t meet again until November 11th. Traders will find out then if the rate hikes will continue.