The longer the Russian/Ukraine continues, the more likely the possibility that the EU will end up sanctioning natural gas.

Recall that last week Russian President Putin had threatened to shut down the flow of gas from Russia to Europe if it was not paid in Rubles.  Both Germany and France said no, and Putin showed his hand, leaving the pumps on for now.  However, the EU has been discussing the idea of banning energy imports from Russia since the beginning of the war.  After the atrocities committed by Russian forces in Bucha, Ukraine, the EU finally committed to new sanctions, including a ban on all coal imports.  As a result, natural gas is in high demand and traders are pushing prices higher to levels not seen since early October 2021.

On October 6th, 2021 Natural Gas made a high of 6.427 and pulled back to a low of 3.572 by December 7th, 2021.  Natural gas prices have been extremely volatile since then, trading back up to 5.728 on February 2nd, only to retreat and fall to 3.938 just 7 days later.  The energy commodity has been on the move higher since then.  On March 31st, Natural Gas moved above those February 2nd highs and today, price reached its highest levels since the October 6th high.  Can it continue higher and take out that level? 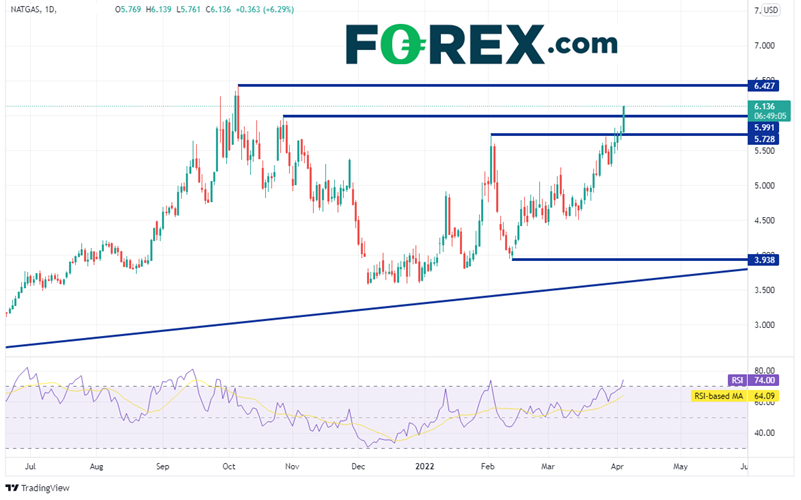 On a 240-minute timeframe, Natural Gas has been trading higher in an orderly channel since March 14th.  Price is currently testing resistance at the top trendline of the channel near 6.149.  If price continues higher, the next resistance level isn’t until the October 6th, 2021 highs at 6.427 (see daily). However, notice that the RSI on both the daily timeframe and the 240-mintue timeframe are in overbought territory, an indication that natural gas may be ready for a near-term pullback.  First support is at the breakout level above the October 27th highs at 5.991, then the February 2nd highs at 5.728. Below there, price can fall to the bottom trendline of the upward sloping channel near 5.61. 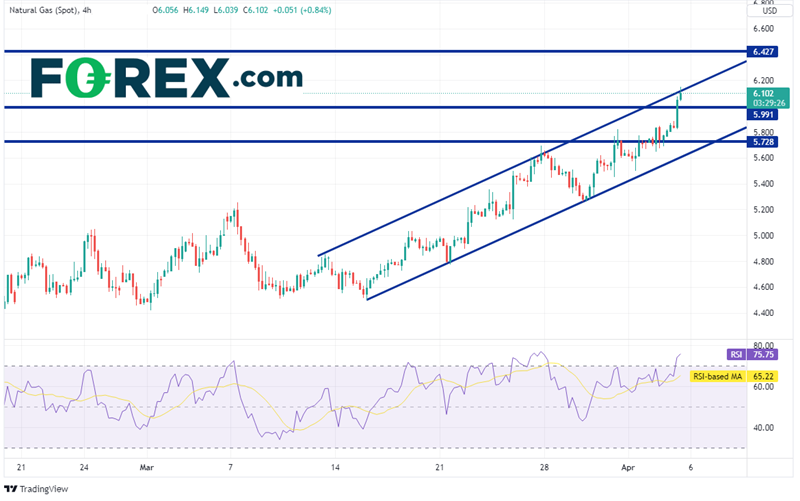 The longer the Russian/Ukraine continues, the more likely the possibility that the EU will end up sanctioning natural gas. Until then, the demand is high, as EU has already banned coal.