NFP PREVIEW: DOLLAR INDEX NEAR 2018 HIGH AHEAD OF JOBS DATA

Ahead of Friday’s US non-farm payrolls report the dollar has managed to extend its recovery, thanks mainly to renewed weaknesses in foreign currencies rather than actual strength in the greenback.

Ahead of Friday’s US non-farm payrolls report the dollar has managed to extend its recovery, thanks mainly to renewed weaknesses in foreign currencies rather than actual strength in the greenback. Disappointing Aussie data, for example, weighed on the Australian dollar earlier in the week, while growing Brexit uncertainty held back the British pound. But it was the Canadian dollar and the Euro which dominated the headlines over the past couple of days. That’s because the Bank of Canada dropped its hawkish bias, sending the Loonie tumbling, while the European Central Bank managed to shoot down the single currency yet again by revising downward its growth projections, introduced a fresh round of cheap lending for eurozone banks and pledged to keep interest rates on hold until the end of the year.

As a result of all these currencies falling, and despite this week’s mixed US data releases, the Dollar Index broke to a new high for the year and closed in on the 2018 high of 97.71 ahead of Friday’s US jobs report (see the chart below). Given the renewed strength for the dollar, the latest jobs and wages data better beat expectations, for if they were to disappoint badly then this would reinforce the Fed’s cautious outlook on the economy and reduce the possibility of rate increases even further. As a result, the dollar could fall back sharply.

The consensus expectations for Friday’s headline non-farm payrolls data point to around 180,000 jobs added in February, after January’s much stronger-than-expected 304,000 print. The February unemployment rate is expected to have fallen to 3.9 from 4.0 percent.  In terms of wage growth, average hourly earnings are expected to have increased by 0.3% month-over-month or 3.3% year-over-year after the modest 0.1% m/m increase last time (3.2% y/y).

The pre-NFP leading indicators that we normally monitor have all disappointed expectations, which bodes ill for the official jobs report:

Given the above considerations, our target range for the NFP for this month is tilted to the lower end of the average expectations. With the consensus expectations of around 180,000 jobs added in February, our target falls in the range of 160,000-190,000. Though the US dollar will likely be moved by a host of other fundamental factors, any headline jobs outcome falling above this range should give the US dollar a boost. A result falling within the range will unlikely make much of a significant impact, unless the wages show a big surprise. And any reading that falls significantly below this range could result in a sharp dollar sell-off.

In the event the jobs and crucially wages data beat expectations, then we would favour looking for short-term bullish setups on the dollar against the likes of the British pound given the ongoing Brexit uncertainty in the UK, or the Canadian dollar after the BOC dropped its hawkish bias. But if the jobs data turns out to be very poor, then we would favour looking for bearish setups on the dollar against gold and silver, given the renewed weaknesses in government bond yields this week as a result of more central banks turning dovish. 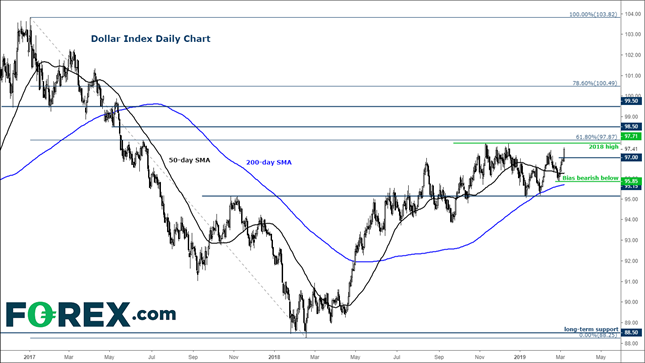