NFP Preview: How Ugly Can it Get?

The leading employment indicators all saw unprecedented collapses in April, confirming the market’s expectation for a truly abysmal NFP reading.

“That is a trick of human nature. We get used to things.” – Author R. J. Palacio

Picture this scenario: On the first day of 2020, a time traveler appears in your living room with a dire warning. Without specifying why, he states that economists are expecting US Non-Farm Payrolls report to show 21.4 million jobs were destroyed in the month of April alone, with the unemployment rate expected to spike from 4.4% to a post-Depression high of 16.0% in a single month. Being the savvy trader that you are, you’d likely review the historical record, including more than a decade of consistent-if-unspectacular expansion in the labor market, and proceed to dismiss the time traveler as a clueless crank.

Nonetheless, that’s where we find ourselves, and markets have been remarkably resilient and adaptable to the biggest economic interruption that we’ve seen in nearly a century (to say nothing of the ongoing global health crisis). While it won’t have the usual influence on Federal Reserve policy, Friday’s NFP report will still provide much-needed insight on the damage to the US labor market, and as such, will likely have a major impact on trading activity across all liquid markets.

As regular readers know, there are four historically reliable leading indicators that we watch to help handicap the NFP report:

In other words, the leading employment indicators all saw unprecedented collapses in April, confirming the market’s expectation for a truly abysmal NFP reading. Needless to say, traders should take any forward-looking economic estimates with a massive grain of salt given the truly unparalleled global economic disruption as a result of COVID-19’s spread. That said, weighing the data and our internal models, the leading indicators point to a worse-than-expected reading from the April NFP report, with headline job growth potentially declining by more than -25,000,000 jobs(!), albeit with a bigger band of uncertainty than ever given the current state of affairs 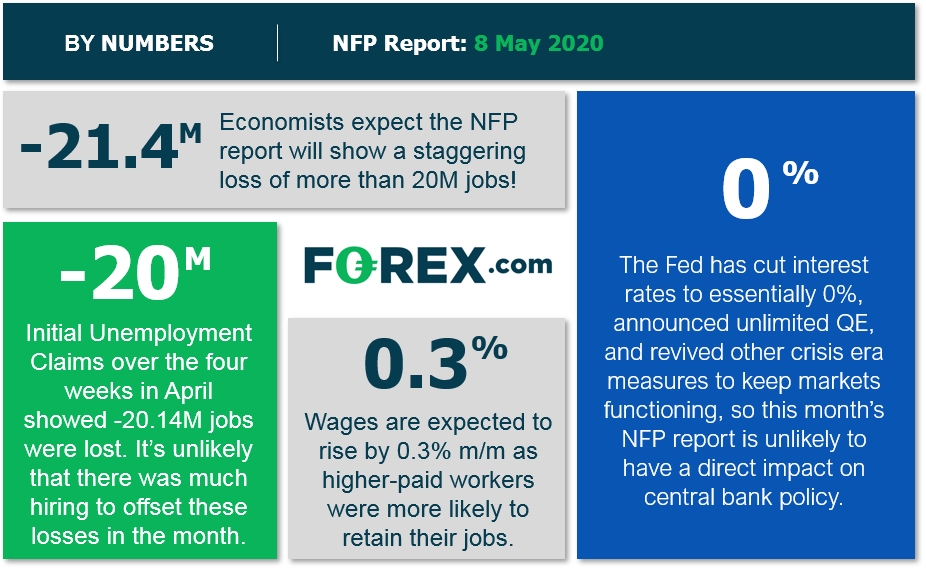 In the event the jobs and the wage data beat expectations, FX traders may conclude that the labor market disruption has not been as bad as feared and look to buy currencies closely linked to global growth; with AUD/USD holding steady above its 50-day EMA this week, that could be a pair to watch for a rally back toward last week’s highs in the mid-0.6500s. Counterintuitively, a weak jobs report could spark safe haven demand for the greenback. In that scenario, we could see USD/CAD make a run at its recent highs in the mid-1.4200s (though loonie traders should be sure to keep a close eye on the simultaneous release of Canada’s April jobs report as well).