NFP Preview: Potential for a Upside Beat…but Will Traders Care?

Anyone following the US labor market this year (read: every trader) has been put through a wringer of emotions...

Anyone following the US labor market this year (read: every trader) has been put through a wringer of emotions. Despite the longest government shutdown in the history of the country, job growth through the months of January and February was strong, with the US economy creating more 200k jobs in each month. Just when traders thought the coast was clear, last month’s reading printed at just 20k, raising fresh concerns about the health of the US worker.

For what it’s worth, both February’s abnormally strong print and March’s peculiarly weak report may be influenced by seasonal and shutdown distortions, as the current 3-month average is 184k, roughly in line with the average over the last year and the expectations for this month’s reading (180k). Traders have taken the apparent job market volatility in stride, with US indices experiencing their strongest first quarter in decades and the US dollar holding near the middle of the FX relative performance charts year-to-date.

When it comes to the FX market, the primary way that the NFP report influences markets is through its impact on monetary policy. As we noted last month, the Federal Reserve has made a big dovish shift and the median member now doesn’t expect to raise interest rates whatsoever this year; markets have gone a step further and are now pricing more than 50% odds of an interest rate cut from the Fed this year: 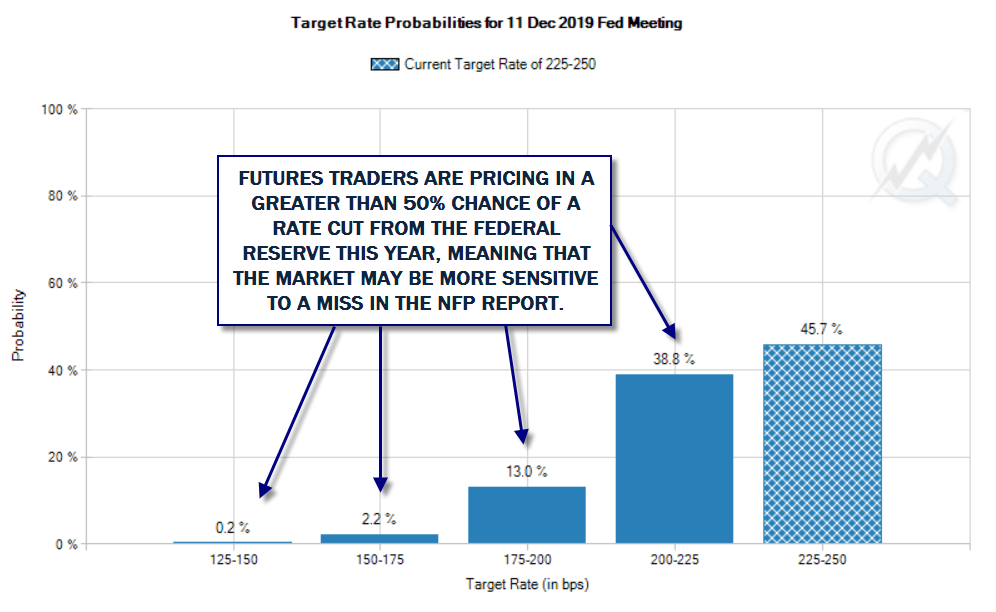 As a reminder, economists expect the report to show 180k in net new jobs, with the unemployment rate holding steady at 3.8% and average hourly earnings rising 0.3% m/m. Against this backdrop, traders may be more sensitive to a “miss” relative to the headline expectations than a stronger report.

With both ISM surveys and initial jobless claims pointing to a stronger headline reading (not to mention the potential for some “payback” after last month’s anomalously low figure), we lean toward a better-than-expected report, perhaps around the 200k figure.

Of course, with the Fed definitively on hold for the next six months, if not longer, the reaction in the US dollar could be limited, even if we see a stronger-than-anticipated reading. Likewise, the medium-term momentum in US stock indices is bullish, so stock traders may be inclined to interpret the jobs report as supportive of stocks, regardless of the exact reading. Finally, readers should note that the unemployment rate and wages reading will also influence how traders interpret the strength of the reading.

In the event the jobs and crucially wages data beat expectations, then we would favor looking for short-term bullish setups on the dollar against the likes of the British pound given the ongoing Brexit uncertainty in the UK. But if the jobs data misses expectations, then we would favor looking for bearish setups on the dollar against a currency like the Aussie dollar, as it could serve as a catalyst for more “risk on” sentiment on the theory that the Fed may have to cut interest rates later this year.