NFP Preview: Will the Jobs Report Save the US Dollar?

When it comes to the FX market, the elephant in the room is the US dollar. The greenback is in the midst of a sharp downtrend against all of its major rivals with the US dollar index testing its lowest level in over two years.

As US President Trump has been at pains to highlight, the last two Non-Farm Payroll reports have been the strongest in the history of the United States…but as those on the other side of the aisle are just as quick to point out, those reports came on the back of the truly horrific April jobs figure and don’t come close to repairing the damaged labor market.

Unfortunately, in the current partisan, pre-election US political climate, every data point from gun violence to vaccine news to economic figures has been highly politicized, and the monthly jobs figures are no exception. Regardless of how tomorrow’s NFP report comes out, traders can rest assured that there will be aspects that both Republicans and Democrats can identify as supporting their predetermined perspectives. As we enter the highly-fraught election season in earnest, it’s critical for traders to put aside any of their personal political leanings and focus purely on the fundamental data and price action.

The COVID-19 pandemic has thrown all aspects of normal life into flux, and the collection and interpretation of labor market data is no different. On balance, this month’s leading indicators suggest that we’ll see a worse jobs report than last month’s initial +4.8M estimate, but the extent of the deterioration remains to be seen.

As we’ve noted repeatedly over the last few months, traders should take any forward-looking economic estimates with a massive grain of salt given the truly unparalleled global economic disruption as a result of COVID-19’s spread. That said, weighing the data and our internal models, the leading indicators point to a worse-than-expected reading from the July NFP report, with headline job growth potentially rising by “just” 700k-900k jobs, though with a bigger band of uncertainty than ever given the current state of affairs

Regardless, the month-to-month fluctuations in this report are notoriously difficult to predict, so we wouldn’t put too much stock into any forecasts (including ours). As always, the other aspects of the release, prominently including the closely-watched average hourly earnings figure, will likely be just as important (and as politicized!) as the headline figure itself. 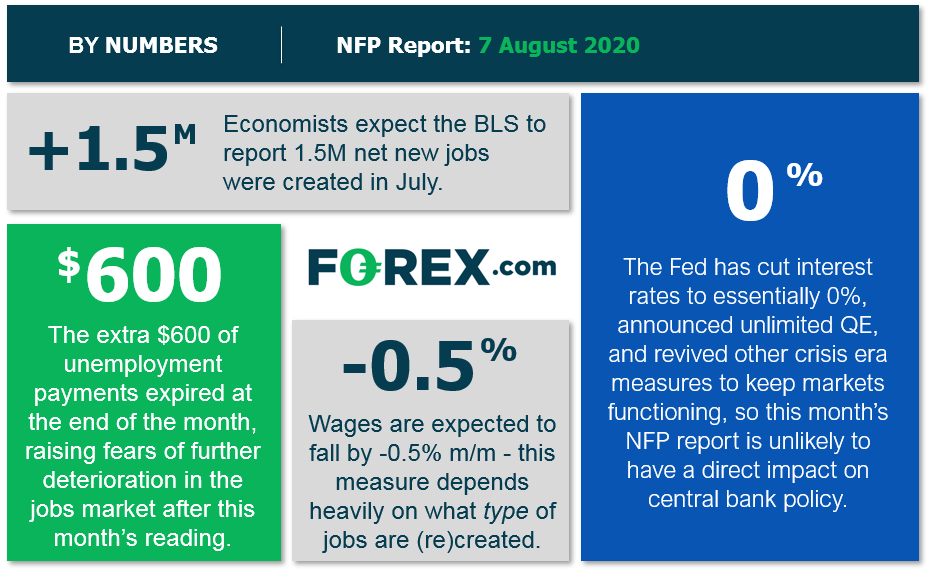 When it comes to the FX market, the elephant in the room is the US dollar. The greenback is in the midst of a sharp downtrend against all of its major rivals with the US dollar index testing its lowest level in over two years. Therefore, if we see stronger than expected jobs growth and wage figures, the greenback may be poised for a recovery against the British pound in particular; traders could play this theme through potential short setups in GBP/USD. Meanwhile, a weaker-than-anticipated NFP reading could create a sell opportunity in USD/JPY, which is not nearly as stretched as many of the other major currency pairs.