As it turns out, there may have been a good reason why the president refrained from teasing the data this time around: while the headline number of jobs created did come in slightly higher than expectations at +213k vs. +195k expected, the secondary aspects of the report were mixed. On the bright side, revisions to previous two months’ reports added +37k jobs as the US labor market continues to maintain a pace of job creation closer to that of a post-recession recovery than one associated with a near-decade of uninterrupted economic growth.

That said, there were some negative, or at least mediocre, aspects of the report. First, and most prominently, average hourly earnings rose just 0.2% month-over-month (2.7% year-over-year), confounding economists who were expecting wage growth to accelerate with the unemployment rate at an historically low level.

Speaking of the unemployment rate, it ticked up 0.2% (nearly 30bps unrounded), though some will argue that it was a “good” rise in the unemployment rate because it was driven by a 0.2% rise in the labor force participation rate to 62.9%. In other words, the improving job market has pulled more citizens into the workforce in yet another sign that there is still “slack” in the labor market.

After years of steady job creation, traders have shifted their focus from the headline job growth figure to average hourly earnings as the most important figure to watch. Viewed through that perspective, the market’s reaction is logical: the slight miss in wage growth makes it marginally less likely that the Fed will be able to hike interest rates aggressively in the coming quarters.

Accordingly, we’ve seen US stock indices bounce from their pre-market lows, though they’ve still opened in bearish territory. Meanwhile, US bond yields of all maturities are ticking lower. Most significantly, the US dollar index has fallen to a three-week low, breaking support from last month and confirming a potential “double top” pattern. As the chart below shows, key support for the greenback comes in around 93.20, a level that corresponds with ~1.1850 on EUR/USD. 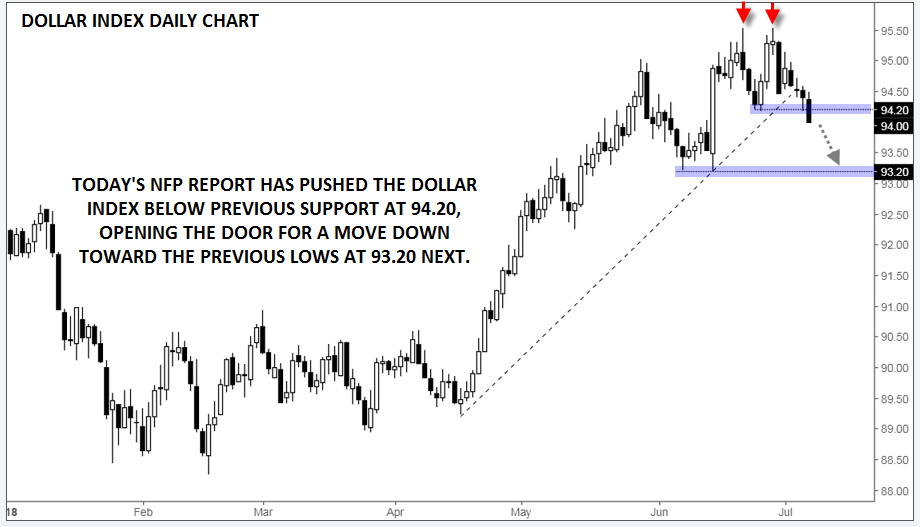