<p>This month’s jobs report was always going to be a tough one to predict – are they ever easy? But on this occasion it was extremely difficult because the nonfarm payrolls data was released before two of the most reliable leading indicators, the ISM Services and Manufacturing PMIs. Consequently, there was even more uncertainty than usual. That being said, the leading indicators that we did have in hand had still pointed to another decent report: initial unemployment claims were essentially unchanged relative to last month at a historically low level (259K) for the survey week, while Wednesday’s ADP private sector payrolls report had come out in-line with expectations at 200K.</p>

This month’s jobs report was always going to be a tough one to predict – are they ever easy? But on this occasion it was extremely difficult because the nonfarm payrolls data was released before two of the most reliable leading indicators, the ISM Services and Manufacturing PMIs. Consequently, there was even more uncertainty than usual. That being said, the leading indicators that we did have in hand had still pointed to another decent report: initial unemployment claims were essentially unchanged relative to last month at a historically low level (259K) for the survey week, while Wednesday’s ADP private sector payrolls report had come out in-line with expectations at 200K.

As it turned out, the official jobs report was actually better than expected. It was thus a surprisingly outcome for those who had sold the dollar in advance of the report on the back of Janet Yellen’s dovish remarks from earlier in the week. The headline nonfarm payrolls report showed that a solid 215K jobs were added into the economy in March while the average hourly earnings rose by a good 0.3 per cent on the month. Both figures topped expectations of 205K and 0.2 per cent, respectively. What’s more, the labor force participation rate unexpectedly rose slightly to 63.0 per cent from 62.90 per cent in February. So you would have thought that the jobless rate would also decline. But you would be wrong, because the rate of unemployment actually rose back to 5.0 per cent from 4.9 per cent previously. This was the only disappointing aspect of the jobs report. Still, the report is unlikely to be a game changer and the Fed will most likely wait for further evidence that the economy is on a solid path of growth before thinking about raising rates again.

Indeed, the market’s initial reaction was fairly subdued as the dollar failed to make a decisive comeback against the euro or the yen. Nevertheless it fared better against the pound and the commodity currencies which fell along with buck-denominated metal and oil prices. Equities showed a mixed reaction, moving very little post the data. Global stocks had already been sharply lower as a rallying EUR/USD exchange rate made EU exports less attractive while the falling crude prices had hurt commodity stocks. Looking ahead to the remainder of the day, the ISM services PMI was due for release at 15:00 BST (10:00 ET), followed by the oil rig counts data from Baker Hughes later this evening.

The daily chart of the USD/JPY has been making lower lows and lower highs, while the moving averages are all in the wrong order. So the trend is clearly bearish as things stand. However, there is a small possibility that it may have carved out a short-term bottom in the middle of last month when it failed to break through the prior low around the 111.00/111.10 area.  The false break there suggests the sellers lacked conviction to sell the USD against JPY, perhaps because they were waiting for some fundamental stimulus or may be because the RSI was in a state of bullish divergence. Since then, Janet Yellen has spoken along with several other FOMC colleagues, mostly delivering dovish comments. Yet, the USD/JPY has refused to penetrate that key support level. And while today’s US jobs report may not be a game changer, the fact that it has topped expectations may suggest that the buyers will step in at a support level such as the 61.8% Fibonacci retracement of the bounce from the March low, at 111.85/7 and defend their ground. While the 111.00/111.10 area holds as support, the bias would remain neutral. A potential break below this level on a daily closing basis however would end any bullish hopes, while a break above the short-term bearish trend line would be deemed a bullish development. The longer-term outlook remains bearish for as long as the USD/JPY holds below the 116.00/50 area – or unless it posts a clear reversal pattern on its charts elsewhere. Trade the USD/JPY cautiously while the trend is uncertain. 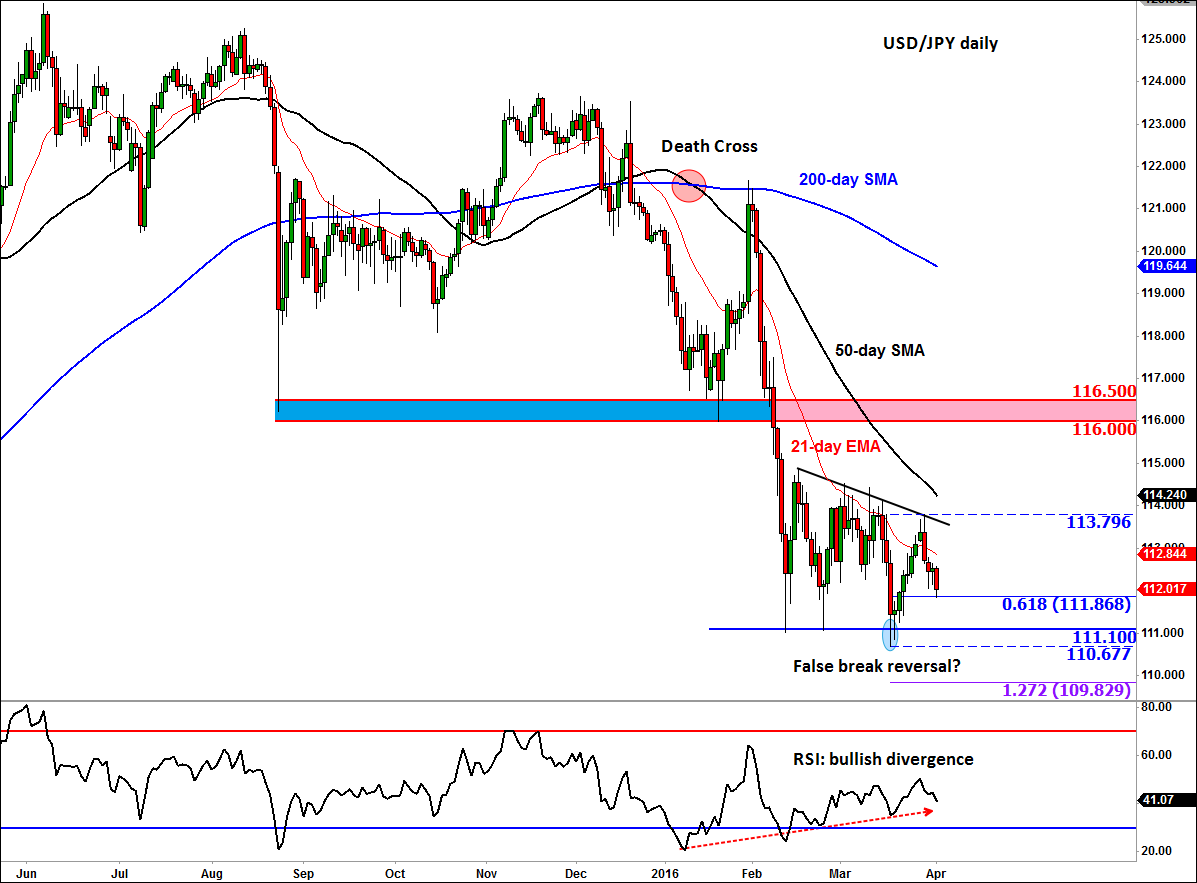