No silver lining for precious metals

Compared to last week when both gold and silver took a big plunge, precious metals have been a little bit more stable so far this week. After that vicious drop, bearish speculators have apparently eased off the gas a little. They have probably used this US data-void first half of the week as an excuse to book some profit on their short positions, and who would blame them given that both metals have tested their technically-important 200-day moving averages?

However, the selling for gold or silver may not be over just yet and the pressure could increase further if market participants grow more confident in foreseeing a rate rise in the US before the year is out. These buck-denominated and noninterest-bearing assets tend to weaken when yields and the dollar are both rising. As yields and the dollar are still rising – as evidenced, for example, by the EUR/USD dipping near the 1.10 handle today – precious metals could fall further in the coming days.

Today’s key event risk is probably the FOMC’s last meeting minutes which will be published later on. If they convey a more hawkish tone than what the market is expecting then this will only increase rate hike expectations in the US, which have been climbing in recent days in the wake of the second TV debate in the presidential election campaign. The market now believes that the odds for a Donald Trump victory are falling which is why the probability of the Fed raising interest rates by December has risen to around 70%.

Silver has found support in recent days from the key $17.15 level where a bullish trend line meets the rising 200-day moving average. The bounce from this level has been noticeable but not in a meaningful way, not yet anyway. So far, the sellers have been able to hold the price of silver down below the $17.75/82 resistance area. Yesterday, another failed attempt to push higher saw the precious metal form a bearish engulfing candlestick pattern on its daily chart. This price pattern basically shows there was a shift from moderate buying to selling pressure and it thus points to more weakness.

The final nail for silver could be a potential break below the $17.15 support level. If seen, the metal could then quickly drop to the next potential support and bearish target area of $16.25-$16.50. Here, the previous support/resistance area meets the 61.8% Fibonacci retracement against the December low. Assuming silver has already bottomed out at $13.65 in December, this $16.25-$16.50 area is where a potential low is more likely to form. Usually a deep pullback such as a 61.8% retracement is seen after a major low is created, before price takes another leg higher. Obviously for silver to get there, it would have to break the bullish trend line which, which may actually accelerate the downward pressure in the short-term as new momentum-based traders show up. That’s why I think a potential break of $17.15 support could lead to a “quick” drop.

But silver has not yet broken its bullish trend line or the 200-day moving average for that matter, and for all we know it could start its next up leg from here. Undoubtedly many bears’ targets have now been met, too. Thus a potential bullish scenario here would be if silver were to climb above the $17.75/82 resistance level. In this scenario, a quick rally towards the long-term support and resistance area of $18.40/50 would not come as a surprise to me. And should silver go on to break above this area, then the next bullish target would be the point of origin of the breakdown at around $19.00.

So there you have it: the key level of support to watch is at $17.15 and resistance is at around $17.75. Depending on which of these levels break first, silver could then either drop to $16.25/50 area or rally towards $18.40/50 area. At this stage, it looks like the sellers are still in control of short-term price movements but will they be able to push silver below the key $17.15 level now? 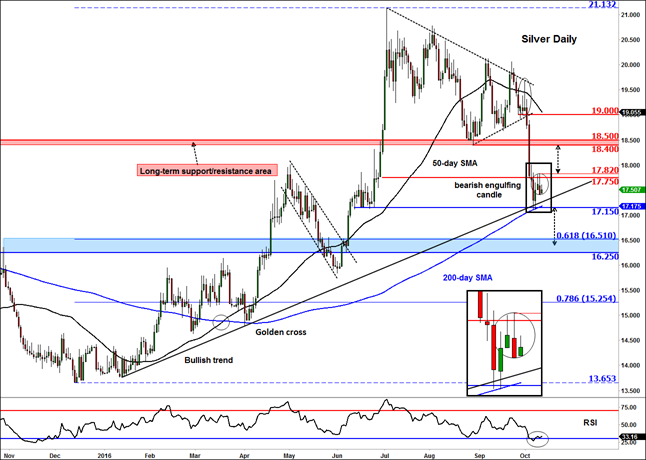 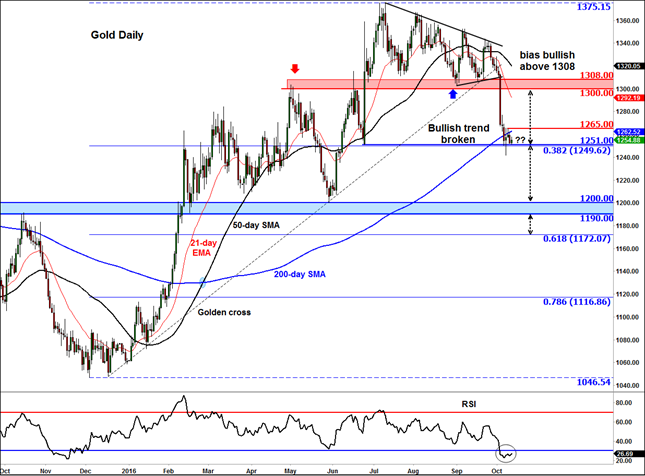