Risk-sensitive stocks have fallen sharply while perceived safe-haven gold, Japanese yen and Swiss franc have soared higher. Sentiment has been hit above all by raised geopolitical concerns after North Korea fired what is thought to be a ballistic weapon over northern Japan in the early hours of Tuesday.

Risk-sensitive stocks have fallen sharply while perceived safe-haven gold, Japanese yen and Swiss franc have soared higher. Sentiment has been hit above all by raised geopolitical concerns after North Korea fired what is thought to be a ballistic weapon over northern Japan in the early hours of Tuesday. Some experts think that the missile could be powerful enough to potentially carry a nuclear warhead. Japanese Prime Minister Shinzo Abe called it an "unprecedented" threat to his country. Investors are concerned that this may lead to retaliation from not only Japan and South Korea but the US too, especially given the rhetoric Donald Trump deployed a couple of weeks ago.

As well as stocks, the US dollar has been hit hard. It fell sharply on Friday after Janet Yellen, the Federal Reserve Chairwoman, remained tight-lipped about the future path of US monetary policy at the Jackson Hole Symposium. This triggered speculation that the Fed may delay raising rates again until next year. If the economic costs of Hurricane Harvey which wreaked havoc over the weekend in Texas turns out to be unexpectedly high then the Fed may have to be even more patient in normalising monetary policy.

This is good news for gold, for not only is it benefitting from the current "risk-off" trade but a weaker dollar too. The fact that the EUR/USD has surged above 1.20 psychological hurdle is also positive for gold, given the metal's strong positive relationship with this currency pair.

However investors may have overreacted. Tensions may calm down quickly if North Korea explains its decision to launch the missile over Japan and says it was a one off, for example. The US may not respond after all if China steps in to ease the tensions. So there’s that possibility.

With the Dollar heavily oversold, a short-covering bounce could lead to some interesting moves across the FX majors, and gold. In fact because of its sharp gains, gold is looking a little bit ‘overbought’ in the short-term. Indeed, the RSI has moved north of 70 again. What’s more, gold was testing a Fibonacci convergence area around $1320/21 at the time of this writing (127.2% extension of downswing since June and 78.6% retracement level of downswing against the high hit in 2016, at $1375).

However should gold eventually break below the $1276 swing low point then this would end the bullish bias. Unless that happens, we are expecting to eventually see higher prices in the coming days and weeks. 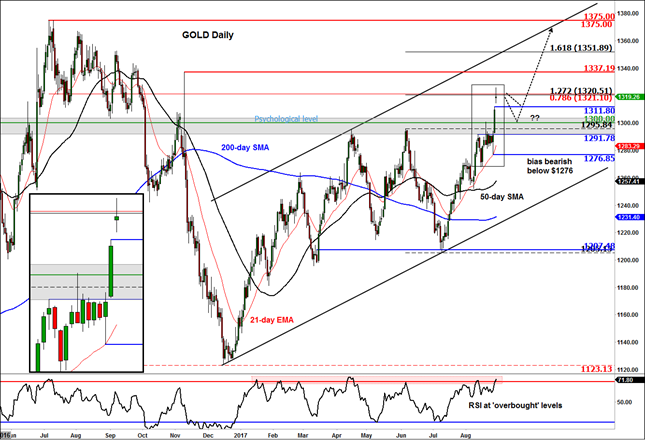