As market participants continue to prepare and position themselves up for the big central bank meetings on Wednesday, most of the attention is understandably going to be on the yen, dollar, gold and stock markets. However, this is not everyone’s cup of tea. Clearly some traders will want to avoid the drama altogether and concentrate on established trends that probably won’t be affected by the BoJ and/or Fed meetings. For FX traders, this means currency crosses like the EUR/GBP or GBP/CAD, for example.

As market participants continue to prepare and position themselves up for the big central bank meetings on Wednesday, most of the attention is understandably going to be on the yen, dollar, gold and stock markets. However, this is not everyone’s cup of tea. Clearly some traders will want to avoid the drama altogether and concentrate on established trends that probably won’t be affected by the BoJ and/or Fed meetings. For FX traders, this means currency crosses like the EUR/GBP or GBP/CAD, for example.

But one particular FX pair that is catching my eye at the moment is actually the NZD/CAD, which admittedly may well be impacted by a central bank decision this week – one that will understandably be overshadowed by the BOJ and Fed: the Reserve Bank of New Zealand. The RBNZ, unlikely to make any changes to interest rates, will be releasing its policy statement three hours after the FOMC publishes its own statement on Wednesday evening.

Recently, the RBNZ dropped its dovish bias and turned neutral as it strongly suggested that it may be unable to cut interest rates again for some time. This has helped to underpin the New Zealand dollar across the board. Meanwhile concerns about oversupply and a stronger US dollar have been among the factors weighing on crude oil prices once again in recent times. With crude oil being Canada’s top export commodity, this has undermined the Canadian dollar.

Because of these fundamental factors, the NZD/CAD has managed to break out of a major consolidation pattern to the upside, above the 0.9550-0.9655 resistance area. If the NZD/CAD can sustain its gains above this zone then we could see significantly higher levels in the coming weeks and months.  A couple of near-term bullish targets include 0.9835-45 area (where two Fibonacci extension levels converge) and then parity (1.00). The point of origin of the breakout around 0.9650/55 area should be the new support to watch. An additional support area is seen around the 0.9550/80 area, below which our bias would then turn bearish. 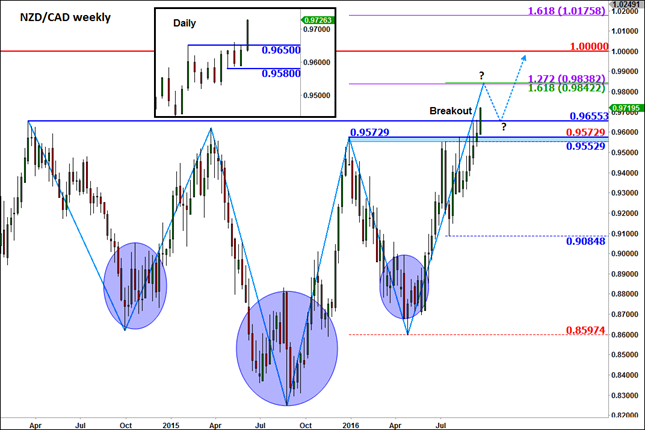