NZD/USD about to breakdown?

The New Zealand dollar has so far been able to hold its own relatively well against the dollar despite the latter breaking to new multi-year highs against the likes of the euro and Swiss franc, and multi-month highs vs. the yen. But the bullish days for the NZD/USD could be numbered.

The New Zealand dollar has so far been able to hold its own relatively well against the dollar despite the latter breaking to new multi-year highs against the likes of the euro and Swiss franc, and multi-month highs vs. the yen. But the bullish days for the NZD/USD could be numbered. After all, the only thing that had been supporting the kiwi was the relatively higher interest rates in New Zealand. Well, now that the US Federal Reserve has raised interest rates again and turned hawkish, that argument is no longer enough to support the NZD/USD pair, not when at the same time the Reserve Bank of New Zealand is dovish. Thus I am expecting the NZD/USD to start heading lower once again.

The selling pressure could well and truly start if and when that key support around the 0.70 handle gives way. Specifically, it is the range between 0.6950-0.7010 that we are watching for a breakdown. Here, prior lows and the long-term 38.2% Fibonacci retracement come together. The initial test of this support range held after a big down move from around 0.7400. But that bounce ended at the 61.8% Fibonacci retracement level (as a side note, deep pullbacks are common when trends first start to change – in weak trends, it is the 38.2% or 50% where price usually turns after a counter-trend move).

If the abovementioned support area gives way as we expect that it might then we may see the start of the next big downward move, perhaps towards the 61.8% Fibonacci retracement against the 2015 low, at 0.6690. Conversely if support continues to hold then a re-test of the broken short-term support at 0.7115 could be the alternative scenario. The bearish bias would end if price starts to move north of the next resistance at 0.7180. 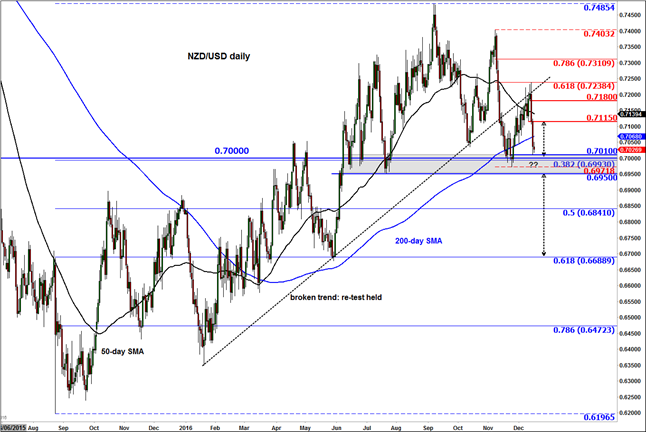