NZD/USD at pivotal area ahead of RBNZ, FED policy decisions

With the US mid-term elections out of the way, investors’ focus will slowly return to global economics and away from US politics slightly.

With the US mid-term elections out of the way, investors’ focus will slowly return to global economics and away from US politics slightly. With that in mind, there are two major central bank interest rate decisions coming up, which could offer a few surprises, although there aren’t any majorly important economic data releases scheduled for publication in the remainder of this week – with the UK GDP on Friday being the sole exception. The Reserve Bank of New Zealand will release its monetary policy statement at 20:00 GMT tonight, with Governor Adrian Orr’s press conference scheduled to start half an hour later at 20:30. Meanwhile, the US Federal Reserve’s policy statement will be released tomorrow at 19:00 GMT.

Will RBNZ hint at prospects of earlier-than-expected rate hike?

The RBNZ has not altered its policy since the last rate cut in November 2016. At its last meeting, on September 26, the RBNZ was very neutral, stating that the OCR was expected to remain at its current level “through 2019 and into 2020.” Since then, we have had two major pieces of economic data from New Zealand. The first was the quarterly CPI inflation report, which came in a few weeks ago and printed +0.9% for Q3, up sharply from 0.4% in Q2. The second piece of major NZ data was released overnight. Statistics New Zealand reported that NZ unemployment rate fell to 3.9%, down sharply from 4.4% in Q2, as employment rose by a solid 1.1% from 0.6% in Q2. As this was much better than 0.5% expected, the NZD/USD and NZD crossed jumped. Meanwhile we have also had the RBNZ’s quarterly Inflation Expectations survey, which remained unchanged at 2.0%. Despite the improvement in NZ data, we are not sure if there will be any major changes in the RBNZ’s policy statement. However, the kiwi could still react positively if the RBNZ hints at the prospects of a sooner-than-expected rate hike.

As far as the Federal Reserve is concerned, well it has come under significant criticism from President Trump for being the lone hawk among the dovish central banks almost everywhere else, bar Canada. So, let’s see if the FOMC will decide to change its hawkish tone slightly, especially in the light of the sharp sell-off in the stock markets last month and now the split government. However, economic data in the US been generally strong recently, including GDP, the PCE Price Index – the Fed’s favourite measure of inflation – and nonfarm payrolls on Friday. Although the manufacturing PMI was disappointing in last week, this could be a one off as clearly the two hurricanes are likely to have been a reason for the slowdown. Meanwhile activity in the non-manufacturing sector grew in October for the 105th consecutive month, according to the ISM PMI.

With the US dollar falling in the aftermath of the US mid-term elections and the New Zealand dollar responding positively to NZ economic data, the NZD/USD has been able to rise back to the long-term pivotal area around the 0.6800 handle. At 0.6780, the kiwi was testing last year’s low and the lower band of the wide 0.6780-0.6860 resistance zone, when this report was written. From this pivotal area, the next move could be very important. A clean break above would be a further confirmation that a low has been formed after rates broke above a bearish trend line recently, while if we see the formation of a distinct bearish reversal pattern here then we may see a pullback in the second half of the week. Key support now comes in at around 0.6675-0.6700 range. From a bullish point of view, it would be ideal if these levels to hold now. 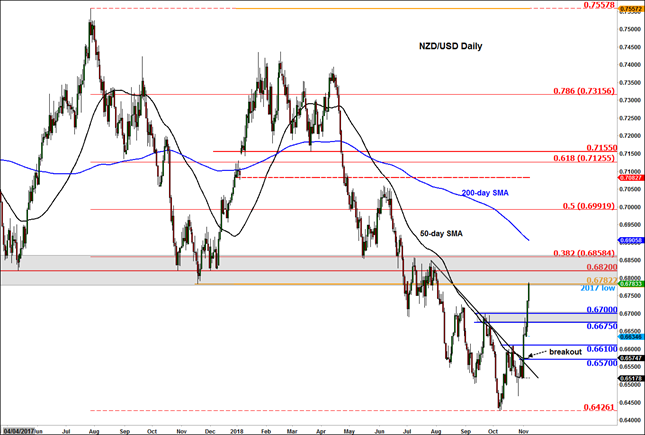