The New Zealand dollar has been among the strongest G10 currencies ever since the middle of November.

The New Zealand dollar has been among the strongest G10 currencies ever since the middle of November. It has been supported among other things by a sharp increase in dairy and meat prices, New Zealand’s main exports. According to the United Nation’s Food and Agricultural Organization, global food prices rose 8.2% in 2017, led by dairy and meat. Dairy prices rose almost by a third, thanks to a surge in butter, whole milk powder and cheese prices. Meat prices gained 9%. Other recent macroeconomic pointers from New Zealand have been far from impressive, with business confidence remaining low and inflation stable, although the employment sector did well in the third quarter as we found out in October. Overall, economic data in NZ does not warrant a rate increase or a cut, which means the RBNZ is likely to keep its monetary policy unchanged for a while yet. At a historic low of 1.75%, the benchmark interest rate in NZ is still higher than any developed economies. So, the NZD remains fundamentally supported, despite short-term fluctuations in the exchange rate.

Mirroring the relatively bullish fundamentals, the technical outlook on the NZD/USD looks positive, too. As the daily chart shows, below, price action has been quite bullish ever since the sellers’ attempts to push the NZD/USD below prior swing low at 0.6820 failed in mid-November. This was the turning point and ever since then we have seen the formation of short-term higher highs and higher lows. As a result, several resistance levels have broken down, including 0.7200 this week. This level is now going to be the main short-term support, with a more immediate support coming in at 0.7230. Even if these levels were to break down in the coming days, the trend would still remain bullish so long as price stays above 0.7075, as this was the last downward move prior to price breaking above 0.7200 old high. Meanwhile the next key bullish objectives come in at 0.7260, 0.7390, 0.7480 and 0.7555. The first two mark the 61.8 and 78.6 percent Fibonacci retracements level against last year’s high at 0.7555, while the 0.7480 was also a key reference point in the past. So, in summary, the technical outlook is still bullish for the NZD/USD and will remain that way until and unless we see a breakdown in the market structure or the formation of a clear reversal pattern at higher levels first. 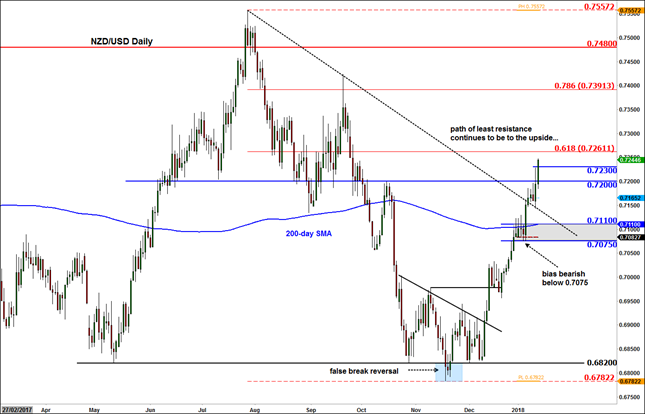